Hockey To Play In OZ

Dance punk/indie rockers Hockey, hailing from Portland, Oregon will make their way to Australia for the first time to perform at the Laneway Festivals and headline shows in Sydney and Melbourne.

Hockey comprises singer Benjamin Grubin, guitarist Brian White, bassist Jeremy Reynolds, drummer Anthony Stassi and touring keyboardist Ryan Dolliver, and have been compared in their sound to bands such as The Strokes and LCD Soundsystem. 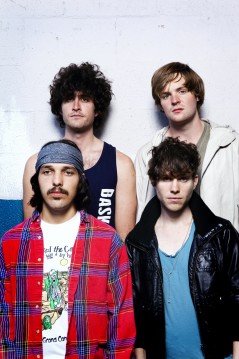 Hockey spent 2009 performing at international festivals Glastonbury, Reading & Leads, T In The Park, Bonnaroo and Hove as well as touring with Passion Pit and Friendly Fires.

The band’s debut single “Too Fake” received great radio support on indie and mainstream stations ahead of their debut album release through EMI ‘Mind Chaos’.

Check out their hit debut single, “Too Fake”.

Be sure to catch Hockey at The Laneway festival or one of the side shows.

One response to “Hockey To Play In OZ”