After five months Montpelier will return to the scene of their incredible debut single launch. In October last year Montpelier released The Rafters at the Zoo, simultaneously announcing their arrival as one of Brisbane’s finest up-and-coming indie pop bands. Followed by a near sell out show at the Troubadour in support of their second single, Take A Picture, Montpelier are ready to present their forthcoming debut EP at a host of shows along the east coast of Australia.

If you haven’t seen these guys, get along to the gig in Brisbane on March 5. It will be huge!

To purchase tickets for the much anticipated opening show at The Zoo, click here. 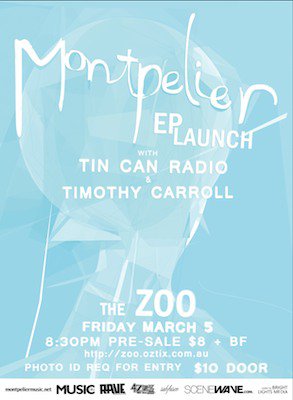 Friday March 5, The Zoo, BRISBANE
w/ Tin Can Radio and Timothy Carrol
711 Ann St, Fortitude Valley, QLD
Tickets are $8 available from www.oztix.com.au or $10 at the door (If not sold out) Doors open at 8pm.