The much anticipated debut clip from UK four piece, Egyptian Hip Hop, comes in the form of Wild Human Child. 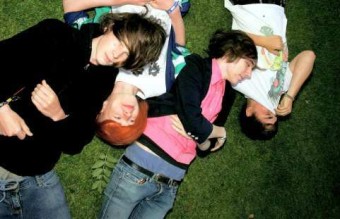 From the second the bass-line drops, you know these ‘kids’ are on to something big. The hype surrounding EHH, since the unexpected arrival of lo-fi pop sensation Rad Pitt, has been phenomenal. They’re the buzz band in the UK right now, with big time publications, including NME and The Guardian, sitting up and taking notice. The blogs are aflutter… and with good reason.

Despite limited exposure, these four Mancunian 17-year-old have already groomed their own unique style and sound, so much so, people seem to be having a difficult time pairing them with a pre-defined genre. ‘Pyramid pop’, ‘paranormal pop’ and ‘doss-wave’ have been thrown around as possible categorizations (mainly by the band taking the piss out of themselves). Like the Klaxons before them, it’s not the first time a ‘buzz’ band has been deemed fit to carry their own sound into a new frontier. While Klaxons seemed withdrawn to the mantle of New Rave pioneers, EHH seem like they’re willing to roll with whatever gets thrown their way.

Fans are rewarded during their debut clip. Drummer, Alex Pierce, obscures his face throughout with a mask seen in some early promotional photos of the band. While their multi-colored, high contrast clothing also makes a memorable appearance. Knowing their appetite for the strange, it’s also unsurprising to see the hi-hat replaced by a pot plant. Is it all a ruse? Is it just one big inside joke? From the bands name to the members outfits and haircuts, it makes you wonder whether they are for real. Either way, it doesn’t seem to matter, they’ve got that indescribable and indispensable commodity all bands strive for.