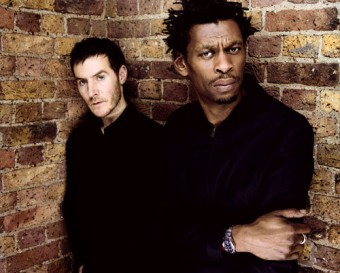 Even in this city it’s always a curiosity to see corporate suits nodding their heads alongside Mooks-clad urban warriors but it was an apt symbol of the broad appeal and longevity of Massive Attack during their performance at the Sydney Opera House Forecourt last night.

The choice of songs in the first hour (there were at least five from new album Heligoland) reflected a desire from the band to remain fresh and edgy, rather than just reel off a greatest hits set. Their adventurousness in exploring their trademark complex rhythms and sonic textures in a live setting was rewarding though largely lost on the crowd, who seemed to tire of the lengthy instrumental breakdowns. The meandering wasn’t helped by the lack of stage presence from Del Naja and Marshall, who seemed more interested in checking out the back corners of the stage than engaging the crowd.

The second half of the concert improved noticeably once the more familiar songs were introduced and the guest singers provided some welcome vocal variation. Martina Topley-Bird recovered from a lacklustre support set with a memorable rendition of the ethereal ‘Teardrop’ and the ageless Horace Andy gave a powerful performance on the epic, slow-build of ‘Angel’. The highlight of the set came from the lesser known soul singer Deborah Miller who made full use of her impressive vocal range in ‘Safe From Harm’ and enchanted an appreciative crowd with a moving version of ‘Unfinished Sympathy’ in the encore.

Massive Attack upheld their reputation for creating concerts both aurally and visually spectacular with a typically arresting light show. But at times the messages flashing up on the electronic signboards verged on cookie-cutter, left-wing sloganeering as everything from capitalism and the war against terrorism through to the vapidity of celebrity culture and Mary MacKillop’s website was targeted.

But under the shadows of the Opera House sails in front of Sydney’s ageing hipsters and arty intelligentsia what better place than to rail against the evils of the civilised world?

One response to “Massive Attack live at the Sydney Opera House Forecourt March 15, 2010”