GenYers will fondly recall the excitement of the late ‘90s and early 2000s when a rash of cocksure young bands was breaking out all over the world, leading a revival of riff-based garage rock which had been overlooked since the heady days of grunge. Foremost among such groups as the Strokes and the Hives was Black Rebel Motorcycle Club, whose 1999 self-titled debut album (released in Australia in 2001) was a glorious reminder of how good a bit of psychedelic rock and dirty blues could be. It’s a decade later, music trends have changed, synths have become indispensable once more and garage rock isn’t quite the height of cool it once was, which only makes Beat the devil’s tattoo, BRMC’s fifth studio album, more praiseworthy. 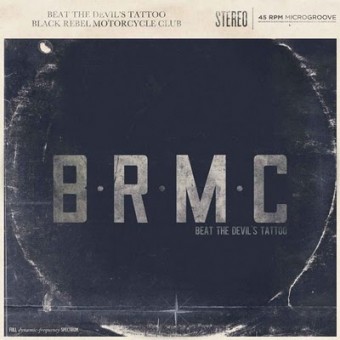 The new album grabs hold of the listener with the opening two foot-stomping anthems ‘Beat the devil’s tattoo’ and ‘Conscience Killer’ and then settles into a alternating rhythm of their signature psychedelic rock sound (‘Bad Blood’ and ‘Shadow’s Keeper’) and stripped-back acoustic roots (‘The Sweet Feeling’ and ‘The Toll’). Although the pacing is sometimes a little off-kilter, the contrast of the two sounds adds dynamic variation and does well to reduce the risk of loudness overkill BRMC are sometimes prone to. Frontman Peter Hayes’s lyrics have been criticized as unimaginative with the derivative ‘Evol’ a good example, but as far as rock and roll crimes go silly lyrics are easy to forgive. After all Jimi Hendrix was hardly aiming for Pulitzer Prize glory with his immortal lines ‘you’ve got to be all mine: Foxey lady’.

The replacement of original drummer Nick Jago with Leah Shapiro (ex-Raveonettes) ironically has helped the band regain that unmistakable BRMC sound and keeps them honest, while still searching for the answer to their eternal question posed in their excellent debut single ‘Whatever Happened to my Rock and Roll?’.