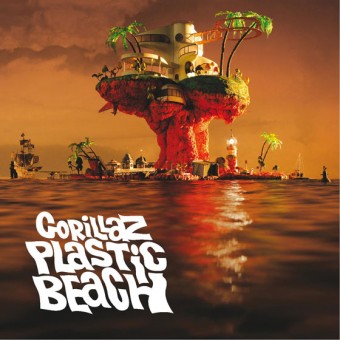 Diving into the third Gorillaz LP, Plastic Beach, for the first time, an orchestral arrangement washes over you, setting the nautical theme alluded to on the cover. As the harmonic tension builds, Snoop Dogg welcomes you to the world of the Plastic Beach in what ends up being the second introductory song after four minutes, leaving you to ponder a potentially epic journey and maybe the first Gorillaz album to crack an hour.

Those familiar with their previous albums will recall that the musical side, led by Damon Albarn (Blur), are given wide exposure by the visual cartoon wrapper provided by artist Jamie Hewlett. It is this approach, in the face of their growing following, established by the worldwide hit Feel Good Inc being featured over the top of 30 seconds of dancing silhouettes a few years back, that has kept them relevant.

So there I was pumped for track three – only to be hit with White Flag and the (admittedly unfamiliar) sounds of the Lebanese National Orchestra for Oriental Arabic Music. The eastern folk-dance introduction explodes into a call and response rap featuring Kano and Bashy that remains one the album’s finest stanzas (at only 1:30min long) before melding back into an orchestral piece.

The subsequent tracks Rhinestone Eyes, Stylo, Superfast Jellyfish and Empire Ants are the standout songs and provide the prime rump of the album despite all tackling different genres, featuring special guests and a smattering of Damon Albarn’s trademark “singing through a transistor radio after just waking up” vocal style.

From there the later half of the tracks are passable, but a lack of intensity is apparent, despite featuring heavyweights Lou Reed, Mick Jones and Paul Simon of the Clash and Mos Def’s second appearance.

Tracks here are often well produced but I couldn’t help being reminded of a friend who had gone to the effort of editing out all the white noise portions of his Mars Volta albums in order to leave just the good portions. Unfortunately, despite the appearance of an epically long LP with 2 intro tracks no less, Plastic Beach’s 56 minutes, given the same treatment, would end a very experimental, brilliant but disappointingly short affair.