If you enjoy getting loose and listening to awesome music than this gig is definitely one you don’t want to miss.

Yacht Club Dj’s have wowed audience’s nation wide on their Batten down the Hatches Tour which commenced March 19 in Western Australia and will disembark at the Zoo April 10. Their infectious mash ups will have you in a time warp, mixing together genres afar, stretching from some old classics to some of the latest songs today. If you have had a chance to witness these guys live, you’d be accustomed to their on stage craziness, be it dancing on the decks, sculling beers, crowd shenanigans (inflatable boats), and general nudity. Having played Falls Festival over the New Year and been invited back to play the Meredith Music Festival two years in a row, they have certainly captivated a strong contingent of followers who can dance away to their raft of songs. 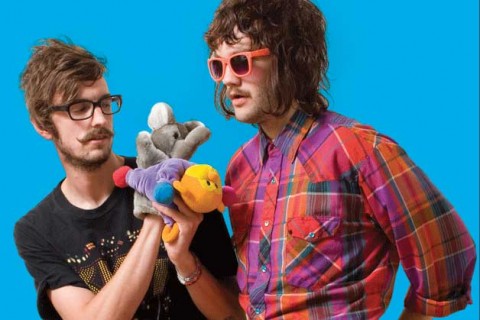 What better bands to support YC Dj’s than to have Brisbane’s very own DZ and Ballarat six piece, Howl. DZ are definitely not unaccustomed to getting a party started. Their live performances are bounded by their energetic stage presence, backed by an immense sound that gets projected by Shane (on vocals, lead) and Simon (Drums) and of course their trademark strobe light. Having released their second single, ‘Teeth’ they have once again produced the goods with an enigmatic video which features, a dancing fish, nude girl, a crazy old lady and a homeless man. Their music video, ‘Mess Up’, turned heads with Shane and Sifi necking a bottle of Jaigermeister within the parameters of the song. I wouldn’t expect any less from these outrageous Bundaberg raised duo. By the way, they will ruin your life.

Sending shockwaves over Triple J since winning Triple J Unearthed High, Howl have shed their school boy luggage but have kept with them their innate ability to create great music. They have experienced the summer festivals throughout the country and are bringing to the Batten Down the Hatches tour, their self titled EP. Reading a review from the Melbourne leg of the tour, downwitheverything it states, ‘It never ceases to impress me how well six eighteen year old boys can scull double Melbourne Bitter stubbies and still play such a well oiled set.’ Their current single, ‘Blackout’ is deservedly receiving significant attention on JJJ at present, which is supported by their successful year to date. To finish the boys from Howl stated late last year that, ‘‘we base ourselves on energy on stage, I love the thrill of playing live when it’s unplanned, you never know what’s going to happen.”

If you are yet to purchase tickets they can be found here. Get in quick because they’re nearly sold out!