Local boys Yves Klein Blue and Last Dinosaurs are teaming up with Cloud Control for a series of super awesome (and cheap!) gigs across Australia’s major cities and regional areas throughout March and April.

The YKB boys have been busier than a one legged arse kicker – bringing Brisbane’s best to the UK, touring regional Oz with Bluejuice and kicking it at Falls Fest. Just last month they also jumped on board the Bacardi Express soul train with the likes of La Roux, Art vs. Science, Miami Horror and Cassette Kids (amazing!).

I’m also super excited to check out the live stylings of Last Dinosaurs who’s popularity is increasing exponentially at the moment – with hits like Honolulu and As Far As You’re Concerned getting mass Triple J air time.

It’s set to be an amazing gig (and it’s only $17.50, plus booking fee), so jump on Oztix to get yourself a magic ticket! 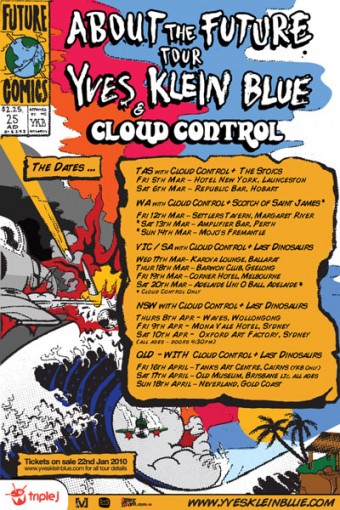