REVIEW: Grand Atlantic and Montpelier at the Troubadour 11/05/2010 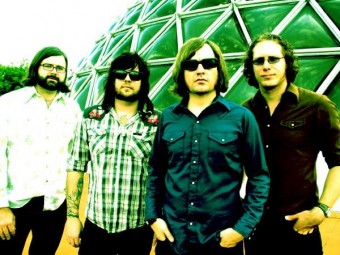 To be honest, I’d heard little about Grand Atlantic. A quick look at their myspace revealed an accomplished band floating right under my very own nose, here in Brisbane. Having recently returned from a trip to the US and Canada to perform a host of notable gigs, including South by South West in Austin Texas, Grand Atlantic are now embarking on a hectic tri-state residency. Between Brisbane’s Troubadour, Sydney’s Landsdowne Hotel and Melbourne’s Workers Club, the guys will clock up some serious mileage over the next month.

Mid-week is always a difficult one (especially when Vampire Weekend are playing just up the road), however a few die-hards turned out to see what Brisbane had to offer, happy to mingle and chat whilst enjoying some great music. Montpelier preceded the main act, intertwining a few new songs with tracks from their debut ep in a thoroughly polished performance. Danny, Last Boat and Start a War were clear favorites. Danny is set to be a hit, a bouncing Modest Mouse like tune. The talented boys mixed it up throughout, with keyboardist Andrew Stone and Bassist Greg Chiappelo switching instruments.

The Grand Atlantic exuded a level of confidence clearly gained through a wealth of experience, as they took to the stage. At ease with one another, and the crowd, they launched into a lush and thoroughly entertaining guitar-driven set. Their sound immediately draws comparisons to Oasis and Jet. Essentially it’s rock with a dash of pop, and it’s easy to see why these guys have garnered fans far and wide. Hit tracks She’s a Dreamer and Tripwires are instantly memorable. Throughout the night Morgan Hann was in masterful control of his 12-string, while lead singer Phil Usher effortlessly delivered well crafted lyrics.

All in all a fantastic night showcasing two of Brisbane’s finest. Get along on Tuesday for their next Tri State gig at the Troub!

Catch Grand Atlantic on their Tri-State tour at a local venue near you!

Tuesday May 18
with The Slow Push & Skarlet Blue

Tuesday May 25
with Steve Grady

Thursday May 13
with Skarlet Blue, Karma Cops & Only The Sea Slugs

Thursday May 20
with Skarlet Blue, Broadway Mile & The Virgin Thursdays

Thursday May 27
with The Prehistorics, Skarlet Blue & Frankie