Like the epic German World War I assault along the Western Front, ‘Spring Offensive’ draw parallels, not only in name, but through their unique and confronting lyrics which play off like old foes battling for ultimate triumph. In parts, the lyrics evoke a breathless sense of pain and despair – drawing on raw emotion, like a general running on nothing more than the fear of defeat – only to pull back, change tempo, and deliver the light at the end of the tunnel. 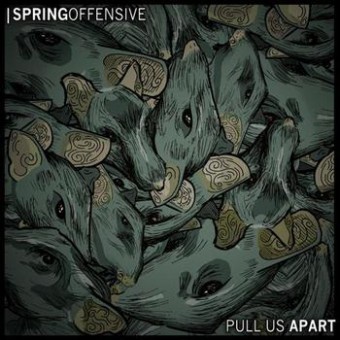 The accusatory opening track I Found Myself Smiling provides an introduction to the struggle about to unfold, “If you want to find your lover / I suggest you slide into the river / like the rat that you are”. The track builds to a strong, if only too short, crescendo, “As the water grows around my knees / I found myself smiling”.

Abacus Rex is disjointed and complex, a story of “mathematician Alan Turing going senile over his work”, while Every Coin continues the abuse of “a man LITERALLY forced to eat the entire contents of his wallet”. The lyrics are confronting and unexpected. Honestly, I’m not the biggest fan of lyrics with this degree of literal intensity, however once the mental divide is bridged this track becomes the strongest on the album.

Build-ups and break-downs continue through The Cable Routine as lyrics explore the thought of a man ready to commit suicide. Everything Other Than This juxtaposes impressive harmonies against lyrics which discuss the prospect of a band break-up. It’s ironic yet fitting.

Slow division “is written from the perspective of a shipwrecked man writing his last ever message”, with guitar work which wouldn’t look out of place on Local Natives ‘Gorilla Manor’.

The lyrics, at times, are brilliant. Once the initial impact of their literal perspective-driven nature has been processed, the layers can be stripped back and ingenuity appreciated. In the case of Spring Offensive it’s a battle for glory, and the band has come out on top in each of its seven tracks.

This is one impressive (mini) debut album.

Spring Offensive – Every Coin from Runaway on Vimeo.