Hungry Kids of Hungary: All Grow’d Up!

So… If you live in Brisbane and you have even a passing interest in indie music, you are guaranteed to have stumbled across the Hungry Kids at least once in your travels.

They are Brissy boys from way back. If you have ever been to The Zoo or the Troub, you have probably bobbed your booze filled brain to their jangley uplifting tunes. If you passed through the last few Valley Fiestas you might have caught a set of theirs. Or, who knows, maybe you sat next to them on the City Cat once (ok, that’s a long shot).

“They are a bona fide part of the Brisneyland scenery: just like the freaky new porcupine bridge, the Queen Street Mall or even the big red lizard statue in West End”

What I am trying to say is, they are a bona fide part of the Brisneyland scenery: just like the freaky new porcupine bridge, the Queen Street Mall or even the big red lizard statue in West End… (Minus the millions of wasted tax dollars, eyeliner-heavy packs of disgruntled emo teens and the vomit from passing pub patrons, respectively).

Anyway, they’re ours, they’re awesome and now everyone else in Oz wants a piece.

Life for the quartet really kicked off 18 months ago when they were announced supreme victors of JJJ unearthed, granting them a coveted opening spot at Big Day Out. Since then their up-tempo hits have been streaming into our homes (and our hearts, awww) single after single.

Their new hit, Come Around, is gaining momentum on the airwaves and is teamed with an awesome new video-clip that made the front page of myspace music Australia this week (wowsers!) The boys are now gearing up to tour their much-anticipated debut album, Escapades, with local amigos (and Scenewave faves) Ball Park Music and Melbournites Big Scary.

VIDEO: Watch Come Around on Myspace

All this is kicking it off with their first show at the HiFi, this Thursday 30th September. Exciting? You bet your bum! And we at Scenewave want to sweeten the deal by offering a double pass for one lucky reader. Email… with your favourite (non-Hungry Kids) Brisbane icon to hit that jackpot!

So come be loud and proud for Brissy and support the Hungry home team before they take off to share the love around the country! 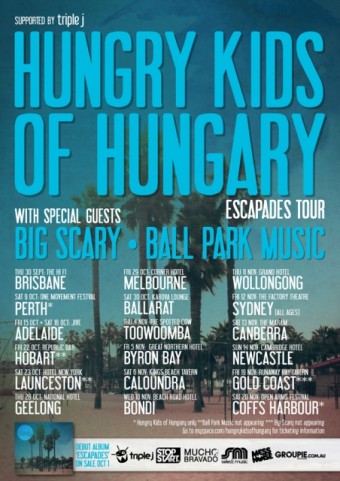 Hungry Kids of Hungary – Let you down

2 responses to “Hungry Kids of Hungary: All Grow’d Up!”