Thursday the 23rd of September witnessed one of Australia’s finest talents JBT whipping up the Riverstage’s five thousand fans into an absolute frenzy. The weather didn’t look promising with rain and storms forecast, so we prepared for the worst with wet weather attire, but it wasn’t enough to stop the thousands of supporters from turning out. 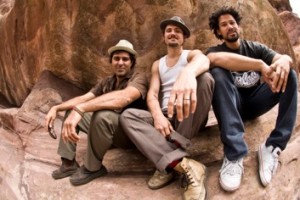 A support slot by another Australian talent, Blue King Brown, got the crowd into the mood with their latest album having gained a lot of attention across the radio airwaves. They broke into some of their big hits with, ‘Women’s Revolution’ getting the biggest crowd response.

Having seen John Butler Trio on a number of occasions it was evident that their support has grown significantly with the success of their latest album, ‘April Uprising’. The trio are definitely a band that appeals to a variety of ages from kids to grandparents amongst the cohort.

The night was filled with a variety of hits across all albums with the crowd at the mercy of his talents. John Butler’s ability to keep an audience captivated with an acoustic guitar is astonishing, culminating with epic build ups and breakdowns, and a delicacy and contrasting intensity which kept the crowd wanting more.

The hour and a half set felt more like 20 minutes of pure musicianship. At one point John Butler left the stage for drummer Nicky Bomba and bass player Byron Luiters to whip up an improvised drum and bass mash that left the crowd in awe at their individual abilities comparable to John Butler’s mastery of the guitar. Nicky Bomba had the crowd in hysterics when he encouraged the mosh to face up the hill and perform the most ridiculous dance they’ve ever danced before!

I had an amazing night but was disappointed I forgot my camera to capture the night. Thanks goes to SGC Media for the double pass.