With the convenient timing of our Weekly Playlist 50 and the Triple J Hottest 100 competition countdown I thought what better way to celebrate than to share with you our top 10 picks for the year that was. So this week’s playlist is a combination of the scenewave contributors’ top 10 songs for 2010. Hope you enjoy. 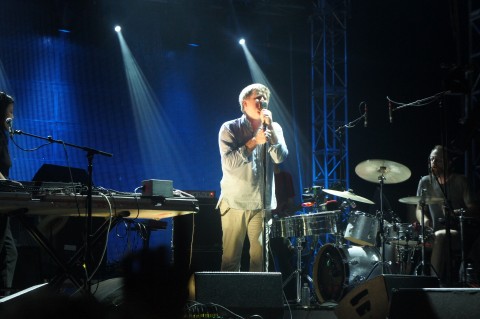 Usually it is a difficult task to pick your favorite track of the year (especially this year with so many amazing songs released) but Dance Yrself Clean was the hands down winner for our top track of 2010! It’s a slow starting song that gradually builds itself up with hints of electronic sounds. Then the epic beat drops and the song kicks off into full LCD Soundsystem glory, forming into yet another one of James Murphy’s masterpieces.

Arcade Fire continue to make beautiful music with their latest album The Suburbs probably their most accomplished to date. We Used To Wait was our favourite track off their album. This fascinating song is every bit as uplifting as it is beautiful.

Local Natives produced one of the best albums of the year, Gorilla Manor, so it was tough decision to narrow down our favourite track. In the end we chose Airplanes as it was the first song we heard off their album and the reason we fell in love with them to begin with.

Again we have another band with such an amazing album that it was almost impossible to choose a favourite song. We ended up going with Undercover Martyn because it was our favourite from their incredible Splendour In The Grass set earlier this year. Looking forward to watching them again at Laneway Festival next weekend.

Boy & Bear shot to fame last year with their unique blend of what they describe as “drivey indie folk and choral harmonies”. Every song they release is better than the previous one, so i can only imagine the amont of exposure they are going to generate this year, especially with the release of their debut album.

Spanish Sahara is the sound of a positive progression for Foals, It certainly isn’t the all-guns-blazing Foals from their debut album. They take a simplistic and relaxed approach in the beginning of this song, then add an immense build up which encapsulates the listener.

What can i say about this track? It is stuffed together with catchy rhythms, riffs and melodies, married with their usual blend of 80s synth-pop. All of this is happening and still it is probably one of the catchiest songs on this list.

Can these guys make a bad song? No-one does it better than The Wombats when it comes to catchy, upbeat indie rock. Judging by this song their new album is going to be a massive success.

9. Coming Around – Hungry Kids of Hungary

It was a big year for Brisbane’s favourite home grown heroes, they released their first album and also gained international exposure. Coming Around is the latest single to be released off their album and is probably their best chance at making it. Like most of their songs, Coming Around features a catchy beat and a sing along tune that uplifts the audience.

This is the only song of The Black Keys’ latest album that was produced by someone other than the band members. Super producer, Danger Mouse, was used to create this song and what a difference he can make. Not taking anything away from the other great songs on the album but Tighten Up is the stand out track. It’s shows a different dimension to their music which was usually confined to grimy blues rock.