An article you probably haven’t heard of

Like a lot of people, Eleanor Houghton is a bit scared of having her music taste pulled to pieces by the scary people that are always one step ahead – she investigates potential heroes of decent music.

There seems to be a slightly depressing and dark scoring system that people have taken to the music world lately. “I found this old EP” – ten points – “by a band from the early 80s” – 20 points – “that you definitely haven’t heard of” – 150 points and you are deemed the winner. That is, until someone wearing a Smith’s t-shirt pipes up and tells you that they have heard of that band, of course they have, and anyway they sold out when they lent their song to that movie with the girl with the 60s haircut. When people went to gigs they used to dance! Crazy. Now, it’s a small shuffle and head nod, anything more getting stared down judgementally. What was once a topic for people to bond over, connecting with their search for the genre or artist that made them feel like it was singing to them and no one else, has turned in to a bitter game of one-upmanship.

In some circles, if you even come close to admitting that you actually don’t mind that song you caught the end of on mainstream radio yesterday, you may as well take a set of Sennheisers, turn them backwards and strangle yourself on the spot, because there is an army of angry cardigan-wearing, brogue-shod people with apparent better taste coming to do soon it anyway. Local artists are deemed sell-outs as soon as they are successful, popularity is some sort of backwards kiss of death to bands, and even admitting you like some of the more underground bands puts you at risk of being called a cliché or fan-girl.

So many people started listening to that twee Scottish pop group in order to prove that they were ‘indie’ that the music began to stop mattering; some bands are just cool to have seen on your iPods. That leaves those who genuinely like the music of such bands in an awkward position, defending themselves with excuses that make them sound just as much like the posers who started the problem in the first place. The underground has become such a popular place to be in order to score cool-points, that it has reached capacity and is starting to flow into the mainstream simply due to a lack of space.

There is, however, a glimmering glow stick of hope in the darkness. Sometimes there are bands that come along that somehow wipe clean the score board and are seen as SIMPLY. GOOD. MUSICIANS. A return of these trusted SGMs to the airwaves has resulted, so far, in listeners uniting in ways that haven’t been seen for some time. While there will still be the occasional person who refuses to admit that they like Radiohead’s new album, people, as a general statement, agree that they are a good band that makes good music. Radiohead’s new album, along with new releases by the Arctic Monkeys, The Kills, and The Strokes, mean that people are finally putting aside the fact that someone other than themselves has heard of these artists, and just acknowledging that it makes their eardrums happy.

And what happy eardrums they are. Thom Yorke and his bowler hat rode Lotus Flower to success. On the day of its release it immediately awkward-danced its way to the top of charts world wide. Another sign of success these days is to get shamelessly parodied by the interwebs, and it took only hours for Lotus Flower to find itself well in the depths of meme land. While the mood could only be described as a typical Radiohead melancholy, it kept fans happy and wanting to hear the entire package the moment it was released.

Speaking of bands with good packages, the Arctic Monkeys have given only a small taste of what is to come with their album, being released on June 6th, and appropriately titled ‘Suck It and See’. Brick By Brick was the first song that blessed fans’ ears, with a surprisingly vague video being made up for with its borderline retro sound. The boys have grown a lot of guts in their time away from the studio, and some fans may be relieved to hear that they may be returning to a more English rock sound, after producer Josh Homme squeezing a more Americanised album out of them with 2009’s Humbug. 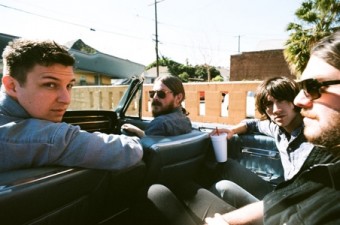 The Kills are also returning this year with their new album Blood Pressures, which promises to be an edgy look at human urges and emotions. Satellite was the first video released, with a beat that stomps its way through the veins of listeners. Alison Mosshart, crush of boys and girls alike, and her model-dating bandmate Jamie Hince say their sound has developed with their time on other projects, and you would be hard-pressed to find a single person who thinks that Mosshart’s time in The Dead Weather was a waste. Fans of The Kills can get their fix on April 4th.

And the result of too much blood pressure? A stroke. Segway success. Julian Casablancas and his crew of New York rockers have a new album that has been streamed and leaked like crazy. This has failed to stifle the anticipation felt by fans however, because of the simple fact that all of their albums so far have been quality. Rather than scouring the record shops for that strange EP that you don’t even understand, but will buy because no one has heard of it and because Avey Tare once said he liked a band that the internet says is similar, people can buy this album knowing that in most parties you can put it on and entertain everybody.

We’ve all heard of The Strokes, we know who The Kills are (and who they’re dating), Radiohead are practically living classics, and everyone probably can’t help but be slightly attracted to the Arctic Monkeys and their quaint accents, but the hipsters are keeping their pretences to themselves this time. Try and make a judging hipster not tap their feet to Last Night or pretend that Matt Helders is a talentless drummer. It just can’t be done. The score-board is wiped clear, and at the end of the day, the listeners are the winners.

2 responses to “An article you probably haven’t heard of”