Wow; is one word that springs to mind when seeing what a band can do in such a short period of time. After winning the Triple J Unearthed spot for the Gold Coast Big Day Out, Brisbane’s Hungry Kids of Hungary have exploded onto the music scene and haven’t looked back. 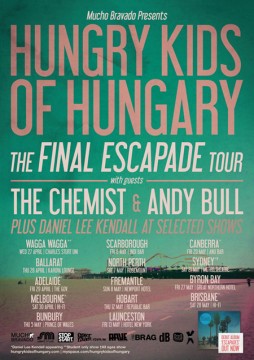 A heavy touring circuit throughout 2010 including copious festivals/gigs across the nation has earned them a swag of accolades, notably a debut #24 spot in the ARIA Album Chart and 75th place in the illustrious Triple J Hottest 100 of 2010. On the back of this, along with the release of their debut album, ‘Escapades’, the band has amassed a raft of fans with their sold-out live shows a clear indication of their popularity.

Currently on tour throughout Canada and America, the lads will be touching back down in Australia and come the 27th of April will embark on their Final Escapade Australian Tour. The month long schedule will see them supported by singer/songwriter Daniel Lee Kendall, The Chemist out of Melbourne and Andy Bull. Fittingly the tour will end up at The Hi Fi in Brisbane on the 28th of May, which i’m sure will be something special.

The full tour cities and dates can be found below. Be sure to get along to any one of these shows to celebrate what has been one of the best albums of 2010.

Hungry Kids of Hungary – The Vacationer