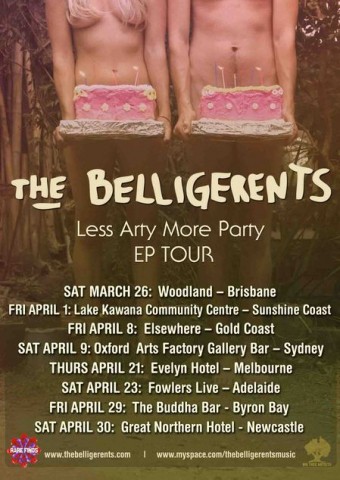 Explosive Brisbane five-piece The Belligerents are set to take their dance frenzied, disco-pop live show on the road for a national tour in March and April to celebrate the release of their much anticipated debut EP Less Arty More Party.

In 2010, the band infused the hearts and dancing shoes of audiences; supporting acts such as Metronomy (UK), Neon Indian (USA), Breakbot (France), Yacht Club DJs, The Paper Scissors and DZ.

The debut single from the EP, These Hands, was officially released by singles label Major Label in late 2010 and since then has received airplay on Triple J and was featured on scenewave’s weekly playlist.

If the Belligerents’ last show at Woodland with Metronomy is anything to go by, next Saturday promises to be a loose night!