Boutique music company, Rare Finds, is proud to present RARE FINDS 2011, showcasing the best independent bands in Australia on December 3rd at The Zoo in Brisbane. Ticketholders will also receive a free 13-track sampler album, with tracks from all the bands and including a special Mars Volta remix of The Dead Leaves single, If The Shoe Fits.

Headliners, YesYou, are playing their first headline show since the live realisation of their ultra cool electro pop. Their massive debut hit, Half Of It, is among the most played songs on Triple J this year, and fans have been eagerly awaiting this moment!

They’re joined by a lineup featuring indie darlings The Belligerents, Triple J Unearthed winners Founds, Teleprompter, and Tin Can Radio, rising stars Gung Ho, Kate Martin and The Trouble with Templeton, along with many other local favourites and fresh discoveries.

The Dead Leaves bring an interstate flavour to the festival, having recently recorded a their debut album, Cities On The Sea, due out late 2011 and produced by Scott Horscroft and Eric J Dubowsky.

A remix by of The Dead Leaves single, If The Shoe Fits, by Lars Stalfors of Mars Volta features on the free 13-track sampler download that is available instantly to everyone that purchases a ticket to the event.

Rare Finds director Andrew Stone explains, “the sampler is an awesome way for people, who might only know 3 or 4 of the bands playing to download all of the tracks and get them into their iPod or iTunes, and hopefully get excited for the other bands playing as well, or to discover something brand new and cool.” 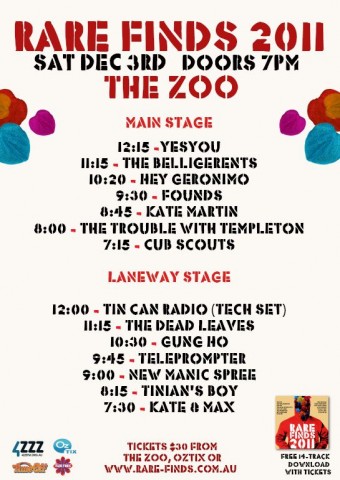