Paging Fleet Foxes fans. You may have heard the devastating news that drummer and backing vocalist J. Tillman has left the band recently. Fear not, however, because Tillman is back under the new moniker Father John Misty and has just released the record ‘Fear Fun’ on May 1st 2012. Before you listen and read on however, leave your Fleet Foxes comparisons and expectations at the door, because this is not a ‘Helplessness Blues Part 2’, this is Father John Misty and ‘Fear Fun’ and deserves a listen, because it’s one hell of a record.

In ‘Fear Fun’, the ex-Fleet Foxes drummer comes out from behind the shadows of his drum kit and tries his hand at front man of Father John Misty and the result is an eclectic blend of reflective folk and powerful grungy anthems, which make this record one of the best released in 2012.

Lyrically, Tillman focuses on dark, self-loathing themes all fuelled by alcohol and drug benders on a passionate quest of self-discovery. On any other record, these existential thoughts could only be accompanied by solemn, brooding music, however Father John Misty mostly uses serene folk music to convey these dark emotions. It takes the listener from peaceful states of contemplation to edge of your seat chaos and darkness.

The record starts off with the ambient ‘Funtimes in Babylon’, before launching into the serene, yet haunting second single from the album ‘Nancy From Now On’, where Tillman desperately proclaims the crippling mantra: “Oh, pour me another drink/And punch me in the face/You can call me Nancy”.

The first single of the record, ‘Hollywood Forever Cemetery Sings’, is one of the stand out tunes, with the film clip featuring an audacious and somewhat psychopathic Aubrey Plaza (April Ludgate from hit TV comedy Parks and Recreation). This tune takes you through a drug-fuelled haze which ends with an anthemic chorus and grungy resonating guitar chords. Check out this film clip!

There are some great bluesy folk tracks on the record, namely ‘Writing a Novel’, ‘Well You Can Do It Without Me’ and ‘Tee Pees 1-12’ and all clearly contain a strong influence from Hank Williams and early post-Cream Eric Clapton.

Another standout on the album is ‘Only Son of the Ladiesman’. The harmonies and rhythm of the track is irresistible and his performance of it live on Letterman has unbeatable energy. Exemplifying further the diversity of genres explored by Father John Misty, is the track ‘This is Sally Hatchet’, featuring some lo-fi guitar that could have come straight out of the Beatles’ ‘Revolver’. The album is rapped up with the harmony-rich folky jam ‘Every Man Needs a Companion’, ending the record with a fascinating expression of self-reflection through the line: “I never liked the name Joshua/And I got tired of J.”

So if you’re into existential, identity-challenging lyrics that peer directly into this talented man’s soul, or if you just like an album full of fun, folky tunes, then give ‘Fear Fun’ by Father John Misty a listen. You won’t be disappointed. They’re also touring around July so if you’re at Splendour in the Grass or around for one of their sideshows, make sure you catch them! 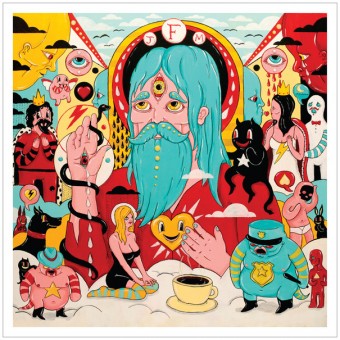