Having only been exposed to Dappled Cities two albums late back in 2009, I instantly had a liking with their style of music. Drawing parallels for me to Philadelphia Grand Jury, Sparkadia, The John Steel Singers and the like, I found myself having their LP Zounds on high rotation. Hits such as “The Price”, “Hold Your Back”, “Don’t Stop There” were the guilty parties for this.

Jump forward three years to 2012, where there is an abundance of new releases, Dappled Cities have given us Lake Air to throw amongst the mix. A poppy, joyful, dancy number which isn’t only complete as a LP but packs a considerable punch that won’t leave you disappointed!

The plethora of dance and electronic acts these days along side the extensive start up indie bands, (who are causing tsunamis across the world), Sydney’s Dappled Cities have moulded themselves with Lake Air to give us a LP that has copious amounts of not only happiness, but fresh air with an innate sense of familiarity. Lake Air also has elements of a new direction for the lads which has clearly been constructed from years of touring, copious beers, relentless experimentation, and men’al hours at both home and recording studios across Paris and Los Angeles. Tim Derricourt (lead singer) states, “The journey of this album was long and difficult, but the music that came out of it is so full of joy and happiness”.

Weaving through the album in its entirety, I think it’s Dappled Cities ability to transform what I feel is your typical pop tracks into unbelievably catchy tunes which you’d have on any party playlist. I suppose this would come after releasing three previous albums and gaining tips from their downunder tour friends, TV On The Radio, Death Cab For Cutie and LCD Soundsystem (a Scenewave favourite).

“Born At The Right Time” is full of harmonies, a catchy chorus, and a fitting song for a new single off the album. “Icecubes” starts out nice and slow, but gains a snowball of momentum, dropping a disco infused change at 1.08. Another notable track for me is, “Work In The Mould”, which not only gives us once again harmony central, but also a very different finish which has me putting it on repeat. Other tracks which are on high rotation are the opener “Run With The Wind”, and “Real Love”.

Dappled Cities have given us Lake Air to appreciate come 3rd of August or if you have Rdio it’s available already. Its definitely worth a run for its money and I guarantee it won’t disappoint your music ears. Although just be careful to not get lost in the effects, as you may not escape this one. Huh? 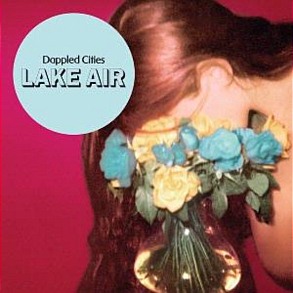