REVIEW: The Cast Of Cheers – Family

Foals, no. Bloc Party, narrrghhh!! It’s The Cast of Cheers! I can see the similarities big time, obviously as their producer conveniently produced, Foal’s 2010 LP, Total Life Forever. These lads are out of Ireland and aren’t going anywhere, anytime soon. Gaining momentum from their debut record, Chariot, The Cast of Cheers have packed enormous blow with their follow up LP Family, and I tell you what this shit is amazing.

A stern recommendation, by a work colleague of the same potato loving decent said have a listen as im hooked. So I did. I opened my Cheers escapade with “Loose Talk at a Party” and my lord. That track could have been on Foals stellar debut Antidotes with out an eyebrow turned. I needed to share this buzz of excitement, this great recommendation, so i jumped straight on whatsapp to my Scenewave mad mates and divulged this new little gem. I admit I hadn’t heard their debut record or of the band, but that was easily passed over as artist such as, Delphic, Two Door Cinema Club, Local Natives, Broken Bells, to name a few all released their debuts that year, not to mention the likes of LCD Soundsystem and the plethora of others releasing records that year.

Opening their mind boggling LP with “Family”, they wind you through a guitar hook ridden journey that has clearly been constructed with great precision and considerable hours of thought. “Pose Mit” follows with layers and layers of guitars, drums and a neat bass line that is not only infectious but has been hammered considerably by JJJ. Deservedly.

The journey then weaves us into the repetitive Battles like “Human Elevator”, followed by a personal pick of mine “Animals”, which builds a great crescendo into a catchy little guitar riff and a chorus that confirms to all that, “we are animals I heard you say, we belong we belong together!”

The only track recycled off their debut is, “Goose” which for me is my least favourite (that’s if I had to rank them from least fave to most fave) on the record along with, “Marso Sava”. The former is driven via bashing snares and the yelling of lead singer Conor Adams belting, “I will never give my heart to anyone else but him or her”. The latter, although catchy in its own right, with its little guitar bends reminiscent of Vampire Weekend, it just doesn’t give me the same vibe and attention as the rest of the tracks.

Clearly the guys from Ireland have learnt a few things from their Irish counterparts Two Door Cinema Club on how to make a catchy tune. Giving us “Trucks At Night”, (my favorite on the album), which blends a simple drumming and bass rhythm throughout to keep the inners bouncing along. Conor Adams belts out a strong lyrical number that continually gains momentum throughout to finally fade into the distance of synth and a repititious, “no light with the Trucks at night. I hope that you do!”. Yep ectoplasm.

Closely following “Trucks At Night” as my go to tune, the cowbell mess of “They Call It A Race” to close the album wraps up my Cast of Cheers journey with great confidence of an amazing third to come. After the introduction, it hits the bridge at 0.36 closely followed by the chorus of, “is any body losing heart tonight!” which well and truly leaves no stone unturned for their style.

Overall The Cast of Cheers are a band to watch over years to come and I tell you that if you’re heading to Splendour In The Grass this year they’re opening one of the days. Watch them now as it wont be long before they’ll be in the hot seat. A personal guarantee of mine is this band will make you want to board pissed express along with the rest of the Belongil masses and have you fusing a bit of flash dance with mc hammer shit. Fucking cheers and believe the hype. 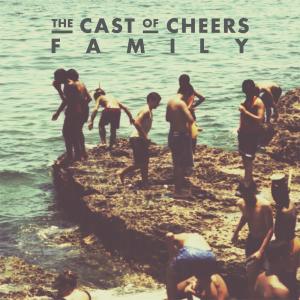