I was lucky enough to go down to the Zoo last Thursday to check out Alpine, the latest indie sensation from Melbourne. After being introduced to the six-piece’s debut record A Is For Alpine a couple of weeks ago as Triple J’s feature album, I’ve been completely obsessed with it ever since. It’s a stunning combination of catchy vocal hooks, subtle vocal harmonies and pure guitar tones.

After arriving early to catch Georgi Kay’s great acoustic performance, we anxiously waited for Alpine to grace us with their presence. Having never ‘Google-imaged’ the band, I was pleasantly surprised when the six-piece emerged on stage. Led by two gorgeous young girls, Phoebe and Lou, I was instantly infatuated by the group’s onstage vibe. The two singers’ moves were perfectly choreographed, bassist Ryan Lamb was going mental nearly knocking over everything in sight, the lead guitarist Christian O’Brian was seemingly channeling film noir in the shadows, and the energetic drummer Phil Tucker practically high-fiving the air between beats. It made for a very entertaining evening.

Their onstage persona was further ameliorated by their wholesome sound as they broke into “Lovers 1” the first song from their debut record. In this day and age, instant downloads and single releases are taking over, and I personally love it when bands open with the first song from their record, showing that their track listing means something more than just an afterthought.

Alpine then proceeded straight into “Lovers 2” (featured in our Weekly Playlist 82), my favourite from the album. The guitar harmonics are driven effortlessly by a simple offbeat bass drum, which gives the song so much momentum, it’s near impossible not to have a boogie. “Seeing Red” and “Gasoline” went off, and it was clear that audience had tuned into Triple J for those ones. 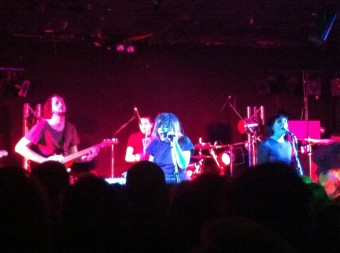 The chemistry between the two lead singers was incredible, at stages Phoebe would lead the charge and Lou would be in the background practically mimicking her. This cute rapport made the entire show a spectacle, which is rare and commendable from a band so new to the scene. They had an equally successful connection with the crowd, exclaiming, “Wow, you’re so loud!” and “Do you want some wine?” in what sounded like British/Melbourne sounding accents, although perhaps I’ve just spent a little too long in Queensland. Even though the girls clearly ran the show, all band members were all as passionate about their music and were all shamelessly dancing about onstage as though no one was watching.

“All For One” came on towards the end of the set and it was dawning on me that the show may soon be over. They closed with “Villages” and after rapturous applause the band said farewell and were off. To the attentive crowd’s joy, Alpine came back out for one last song. Phoebe slung a guitar over her shoulder, further showcasing the group’s musical talent (even if she only strummed one chord). She then got down on her knees, to emphatically strum out the final few bars, delivering a spectacular end to the show. When glancing around at the crowd there were a lot of jealous girlfriends, with all the lads eyes glued to the stage.

I walked away from the stage unsure of whether I wanted to marry both of these gorgeous lead vocalists or whether I would be happy if they simply married each other. Either way…

We were able to catch up with the group after the show, and they were all unbelievably friendly, particularly Ryan, who was navigating all the paparazzi and fan photographs. It was a great end to a great night, and we can’t wait to do it again Alpine! 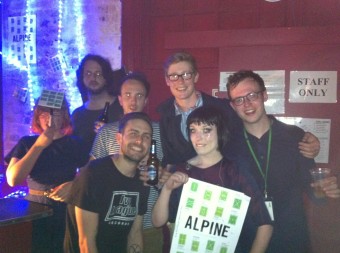