Listed amongst the ‘up and coming’ and ‘bands to watch’ by countless critics across the globe, The Frontier Touring Company is thrilled to announce that alt-J (∆) will be making their debut visit to Australia next month.

Their unique band name ∆ is pronounced ‘alt-J’, named after the keystrokes required to make the symbol on a Mac computer.

The symbol represents change in mathematical equations and suitably the name was sprouted at a turning point in the band members’ lives.

Broadly classed as art rock but taking in the influences of everything from trip-hop, folk music, electronic and post-rock, alt-J (∆) have created a genre of music that is uniquely their own. 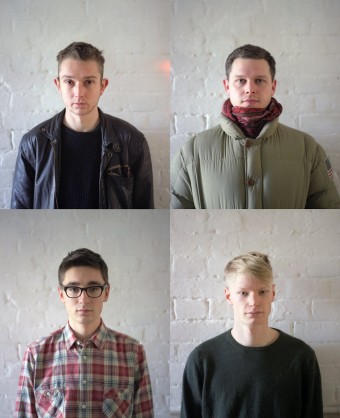 ‘On the surface, this is smart alt-pop, but alt-J (∆) have messed with the formula just enough to make this a brilliantly disquieting debut.
In refusing to submit to the rigours of a genre, they might just have made themselves masters of their own.’ – NME

‘There is little to find disappointing about An Awesome Wave. Each new song builds on the last, spiralling off on a new path, testing, experimenting, returning again to familiar ground.’ – Drowned In Sound

The band is set to take their cinematic tunes on the road as they play a number of international festivals this European summer. They kicked off the fun at England’s Latitude Festival this July to rave reviews:

‘alt-J (∆) the electronic/indie band to watch… thrilled with their idiosyncratic mix of dubstep, folk and indie.’ – The Guardian

‘Their sort-of folk-step goes down an absolute storm. That main stage ain’t far off for alt-J (∆)’ – Digital Spy

Next month, alt-J (∆) will bring their intricate harmonies and inspired electronica to Australian shores for the first time.

Don’t miss the opportunity to see why this four-piece have caught the attention of countless critics and music lovers across the globe.

General public on sale from 9am local time, Thursday 13 Sep

An AWESOME WAVE OUT NOW THROUGH www.liberatormusic.com.au