Jeremy Neale is the frontman for Brisbane band Velociraptor. He also has his own solo project, and Brisbane will be lucky enough to experience both acts at nek week’s BIGSOUND Live Festival on Wednesday 12th and Thursday 13th September. It’s set to be a cracking bender, of which we hope to see many of you there!

We caught up with Jeremy to chat his live shows, The Kinks, composition and what it’s like to play with 11 other musicians on stage at once. Here’s what he had to say!

You’re playing two shows at Big Sound Live, one being a solo act and the other part of 12 piece (minus the 2 DZ Deathrays fellas) Velociraptor. What do you like from each live experience compared to the other?

Playing in Velociraptor is moderately controlled chaos. It’s a total party and allows us to deliver the best there is in somewhat simplistic party garage stylings whereas playing inmy solo band is more about about precision and although still pop and high energy it can afford be a bit more complex and subdued at points.

From a songwriting perspective, which do you find easier – solo or Velociraptor.

I think they’re both easy to write for and I’ve always got a clear vision of which band the song belongs to but it’s really cool how both bands take songs in completely different directions even though both bands fall somewhere on the garage pop spectrum.

Are the songs composed very much as a group process or do you come up with the ideas and take them to the group for them to add their parts?

When any of us write a song for Velociraptor we generally just do a dodgy demo at home and send it around for everyone’s thoughts on it. Then once we get to jam on it the raptor machine takes it where it needs to go.

Funniest/weirdest thing a fan has ever done to you?

I think we’ve been baked biscuits before…which really isn’t that weird unless the secret ingredient is poison. In which case it isn’t funny or weird and is in fact a crime. It is important to note that Velociraptor are tough on crime.

Has being in a 12 piece band ever run you into some issues with fitting onto stages? Any mixups where the techies have got the stage dimensions wrong?

It’s a good thing we’re not afraid to play on the ground or in the crowd. If the stage isn’t friendly to us we just go MacGyver on it.

Who are you most looking forward to seeing at BIGSOUND?

The Preatures, Straight Arrows, The Gooch Palms, Step-Panther, Loon Lake, Super Wild Horses…there’s a ridiculous amount of rad bands. I will endeavour to see as many bands as possible. 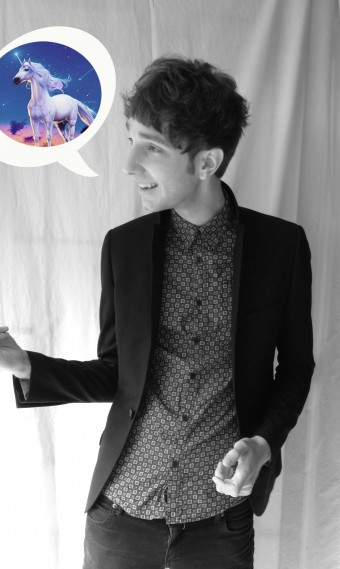 Coolest place we ever played a show was probably the Beresford in Sydney cos they gave us a private band room that I think may have belonged to Sean Connery.

Cynthia is your dream girl. She does what she wants but has your back in a fight.

I can hear (especially in Cynthia) a massive Kinks influence. Can you confirm this? Also who else has influenced your sound?

Kinks for sure. Alot of Mersey Beat artists like Gerry and The Pacemakers and The Hollies as well as more modern proponents of garage pop like The Hives and Black Lips.

Playing in such a large ensemble could lend itself to a very interesting live performance. Do you ever use that in your favour? (costumes, choreographed dancing, anything like that?)

I think all we use it for is chaos and the fact that we can send members into the crowd to get things started. I don’t think many of the lads would be into costumes but it would be pretty badass. West Side Story style gang for the win.

Do you miss the DZ lads?

Aye we’re getting there definitely. Hopefully we can muster up another release for next year even though we’ve been notoriously slow on the release front up until now. A full album would be a lot of fun. When we do our next release it will get to show off the songwriting of more of the guys and be a quite dynamically different record methinks.

What are your thoughts on Dub Step?

I think some of it is pretty clever. I don’t understand how they make it so I assume there’s a bit of skill involved but it seems a like it couldn’t have too much of an extended shelf life once all the greatest ‘drops’ have been used.

Who’s punching above their weight out of Chad Kroeger (Nickelback) and Avril Lavigne?  The Chaaaaaaaad.