Even after catching them down at Falls Festival in Marion Bay, I was still aching and craving more Django Django. I was so glad that I was back on the mainland (as those Tassie twats call it) for their private show at the Zoo supported by Sydney Parklife Unearthed winners, The Griswolds.

Having interviewed Chris from The Griswolds earlier in the month, we were busting to see their set and catch up with the guys in the flesh. The Sydney five-piece have only released one four track EP so far, entitled Heart of a Lion, but their 40 minute set indicated that they might be laying down a full length LP sometime soon.

The EP was reproduced live with so much energy, supported particularly by extended percussive jams, and it soon became that The Griswolds were well and truly up to opening for Django Django. They opened with the theme tune to the latest run of Wet n’ Wild adverts, “Summer Preasley”, which could easily sneak itself into Vampire Weekend’s debut record without anyone blinking an eye. “Mississippi” was another memorable track, before they unleashed into a Michael Jackson cover, which title eludes me right now, unfortunately. The Griswolds closed with hit single “Heart of a Lion”, accompanied by a request to the crowd to take their love of this tune straight to the Triple J Hottest 100 website, and bang it in their top 10.

It was a half hour wait for the Djangos, and the audience was treated to a record many of us hadn’t heard in a good couple of years, Phoenix’s Wolfgang Amadeus Phoenix. We got through half of “Love Like A Sunset” before the stage was ready for Django Django (they do their own sound checks… lads). The two Scottish lads (one of them the spitting image of the Proclaimers, pictured), one Leeds lad and an Irishman then bounded over on to the stage, to everyone’s disappointment, without their tell-tale matching shirts on. It was too hot even for that. They started with “Introduction” into “Hail Bop”, and after a few songs, these Northern whities (hypocrite warning!) were sweating it up hardcore and announced that this was by far the hottest gig they’d ever played. 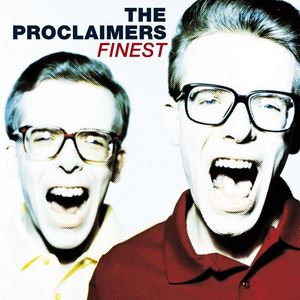 The whole hour and fifteen minutes that the Djangos were on stage was one fucking loose, sweaty party. They treat their live shows like one long, extended jam, lengthening each tune by adding long, vocally harmonised buildups and plenty of percussion solos. Watching their keyboard player/synth and life enthusiast, Tommy, really kept me entertained. Apart from looking from another generation, if I didn’t know better I would have thought that he was pushing 50 or 60. He plays the synth with this stupid little grin on his face, and it makes me think that those 1h15 sets the Djangos play may well be the happiest of his life. Reminds me a little of this guy…

The lead singer, Vinnie, wasn’t too fussed on the whole crowd interaction thing. Every now and then, he’d approach the microphone during a lull in the track and for a minute the audience listened intently for some crowd banter in his Irish accent, but all he could manage was a quick ‘woop’, and would then hastily cower away towards the drum kit as if he’d said something naughty. The bass player had this rigid, upright look about him, and the combination of his tight, white gym shirt; his black, short back and sides hairdo, made him look like one of the Gestapo in their down time (no offence and I assume none taken…)

The crowd was animated to say the least for the entire Django’s set, ending in one exhausted, fetid puddle of sweat. Crowd favourites “Default” and “Firewater” went down a treat, but it was clear that these weren’t the favourites of the band to play. Impressively, there were barely any breaks between tunes. The Djangos really treated the entire set as though they were DJ-ing their own record, fading one song into the other, extending sections here, cutting sections there, before the crowd had time to take, what would’ve been a much appreciated, dance break. They really brought it down for “Hand of Man”, a tune I hadn’t truly appreciated until I had the privilege of listening to it in a live setting.

They then proceeded into “Skies Over Cairo” which is one of the coolest songs I’ve seen any band do live. I was watching the band’s faces for the entire tune, and it was clear that they loved the fact that they could get the crowd going with what is essentially a long, Egyptian inspired jam with minimal, nonsensical lyrics. Seeing them get so much out of playing that tune was one of the highlights of the night. That lunatic that they call the keyboardist nearly died from happiness five seconds into starting this one.

“Waveforms” was insane. The ‘touch it, break it, shake it yeah’ section, was layered with all three harmonies and sounded just cuckoo. “Life’s a Beach”, despite being one of my favourite tracks from the album, was underwhelming live, and it really showed that they only had one guitar player. I was really missing that high lead guitar part, but Vinnie instead chose to play some heavy, rhythmic chords in an attempt to make it sound full. Their last tune before the encore was announced by the declaration, “This is WAR!” After the crowd realised that the surf rockers weren’t announcing a battle with the audience, they started rocking out and grooving to the most awesome song played that night, “WOR”.

The British four-piece came out for the encore after rapturous applause, without as much as changing their shirt, for which I’ll give them full credit. I’d been waiting and waiting all gig for my favourite “Silver Rays” and was praying I hadn’t overlooked it or that they leave it off their setlists. Thankfully that easily recognisable synth line was dropped and for another 5 minutes of so, the audience could forget that the show was nearly over, and get down, dirty and sweaty for one last time.

Hopefully these UK lads are back in the recent future, because that was by far one of the best live performances I’ve been to. Big up, Django Django!