When tickets to ex-Fleet Foxes drummer and backing vocalist Father John Misty (J.Tillman’s onstage alias) became available a few months ago, I was quick to book myself in. His performance at Splendour in the Grass 2012, along with my fondness of his debut record, Fear Fun, combined to make this decision an easy one, and before long I was headed along for another night of shimmying, hip-twisting Father John Misty.

Opening for the bearded cult hero were Aussie locals Oh Mercy, who put on a terrific show to an enthusiastic crowd. Alexander Gow is an incredible front-man, and is essentially just a chilled out entertainer. You can’t get any more relaxed, really. Their half-hour set flew by, and then came the nervous wait for the man himself.

Unfortunately, the crowd wasn’t treated to the famous Tillman sound-checks from SITG, where he was testing his mic with hilariously sardonic lines like, “Inane pre-show banter” among others. He’s certainly a very confident  public speaker and his crowd interaction is one of the highlights of his performances. Josh was the last on stage, following the rest of his group, who can only be described as a motley crew. How he finds such an eclectic bunch of band members I have no idea, but good Lord can they play music.

Tillman walks out with a bottle of red wine, which he immediately glugs down (never glug always sip a lovely wine). As predicted, he opened up with the first track from Fear Fun, “Funtimes in Babylon”, which is such a great opener to showcase his incredible and unique voice. From the very first track, Tillman made his intention to bring the ruckus to the crowd known, shimmying to his knees several times and screaming spectacularly in the breaks between lyrics.

“Only Son Of the Ladiesman” was incredible; a certain highlight of the night. His onstage demeanour still cracks me up. Having clearly having missed the ‘how to dance like a frontman’ classes when he was stuck behind the drum kit in Fleet Foxes, this only adds to his performance, making him one of the best front-men getting about in modern rock n’ roll. He tiptoes the line between appearing to not have a clue how to hold himself, and knowing exactly what he’s doing, but just not giving a fuck about how he looks. 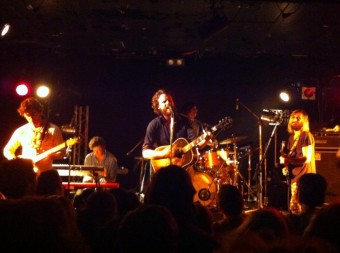 The guitarist was outstanding. I was glad to see that I’m not the only four-eyed axe wielder who has to push the old spectacles back up the nose during a performance, and admired the timing required to strum the chord, quickly get his mits up to his head for a quick push and back in time for the next strum. His solos were epic, particularly in “This Is Sally Hatchet”, where he tore the place apart.

There was a very touching crowd moment in “Nancy From Now On” where the entire crowd sung the first verse, accompanied by Tillman’s interpretive dancing. Nancy is amazing in the way that it quickly shifts from a very chilled verse, to one of the coolest groovy guitar hooks on the album in the chorus. Definitely got me awkwardly bobbing at the knees.

Another highlight of a Father John Misty gig is his chat. Being a very intelligent man, he loves sharing deep, philosophical thoughts with the audience between songs. He also clearly loves his fans. Last night he spat out on a line of banter at the crowd about how much he was fond of them, in the form of, ‘I just want to gather you up in a picnic basket, take you to the transit centre, and leave you there for a week; just to see your face when I come back and rescue you.’

At one stage during the show, Tillman silenced a drunken lout, who had been incessantly yelling rubbish between songs. Tillman quickly quipped, ‘Well aren’t you a chatty fellow. I don’t know how I’d do this concert without you cutting every thought I have completely in half.’ Unsurprisingly, he was silent for the remainder of the show. 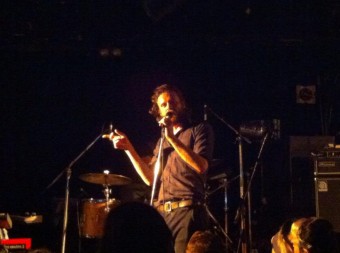 Having attempted to engage analytically with the lyrics of the album, I was always interested in the extent to which Tillman struggled with identity crises, and particularly whether or not this would show its head in the live setting. Throughout the night, he included additional lyrics to the songs, which gave this special feeling that the audience was being included in the creative process, and that he wasn’t merely regurgitating pre-rehearsed lines. During “Every Man Needs A Companion”, he adapted some lines of the verse, into ‘I never liked the name Joshua (who would!), and I got tired of J (whoever that guy is…)’, which sent a few rogue shivers down my spine.

He finished his first set with my favourite tune of 2012, “Hollywood Forever Cemetery Sings”, and it was all I ever wanted. I sometimes get to gigs and wish that bands played my favourite of their songs a little differently – extend parts here, make other parts louder there – but I can honestly say that HFCS was perfect. The extended breakdown section was incredible, and after what seemed like minutes of screeching, horror movie sounds, they let go into an extraordinarily loud and passionate final chorus. Amazing!

When he came back out for the encore, Tillman looked stuffed. They put everything they had into three new tunes, the last which featured a cameo from Booker T & The MGs “Green Onions”, and the show and their Australian tour was over.

An incredible performance, by an extremely talented group of musicians. Come back soon, and we can’t wait for the next album. Thank you FJM. 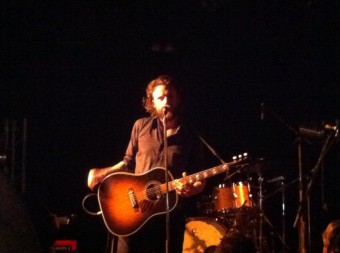