Sydney group PVT have been playing their unique, experimental brand of synth rock for over ten years now, and have become somewhat of a cult figure in Australian music, performing with the likes of Sigur Rós, Grizzly Bear and Brian Eno. Three years since releasing Church With No Magic, they are back with Homosapien, released track by track over the last 11 days.

Homosapien is, to put it simply, an experience. Sweeping over different soundscapes, from driving guitar riffs to heady electro that would be a perfect fit in 80s movie Tron, this album displays the musical prowess and diversity possessed by this 3 piece. Evolving from their earlier math rock roots, Homosapien is a more accessible, more upbeat change from the darker, brooding Church With No Magic.

The album kicks off with “Shiver”, a ride on a wave of buoyant synth with vocalist Richard Pike murmuring softly over the track, but there is a quick change of pace with “Evolution” and “Electric”. Opening with the aforementioned Tron-esque deep electro beats, a darker mood is quickly adopted and Pike returns to his distinct singing style, which continues with “Electric” retaining the same deep synth bass lines and heavy drumming.

“Cold Romance” picks it up again, with some upbeat tones disguising the story of a relationship gone stale. The minimalistic approach and light drums mixed with heady synth and echoing conclusion makes an interesting combination, and it quickly established itself as one of my favourites from the album.

PVT’s first two albums, Make Me Love You and O Soundtrack My Heart, were entirely instrumental, but listening to this album you wouldn’t realise it. Richard Pike has really created his own style, and in this album he really owns it. His haunting voice draws you in, hypnotising you, and when you come out at the end you won’t know what the fuck just happened. 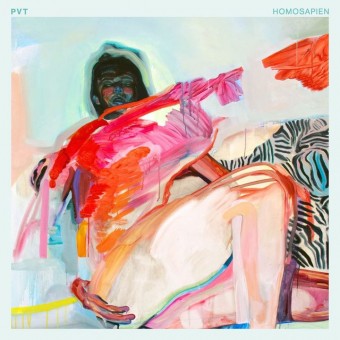 “Love and Defeat” is quite similar, and then the eponymous track “Homosapien” blows you out of the water. My favourite track off the album, it begins with jumpy, echoing vocals, and heavy bass, then it quickly jumps into the unknown and all of a sudden you’re in the middle of a killer riff that’s carries you though the song, giving you a combination of the signature synth and distorted vocals with live drums and guitar.

Next comes “Vertigo”, which brings you back to the early PVT days with sweeping drums and keys. “Nightfall”, the first single off the album, is a classic PVT song, Pike’s vocals mixing with assorted drumbeats and another trademark synth line, and is one of the highlights.

You are then given “New Morning” a deep, droning song, and “Casual Success”, a more upbeat song with jittery drums, which are probably two of the weaker songs on the album. The final track “Ziggurat” is a fitting end to the album, farewelling listeners with giddy beats that leaves a melancholic impression of the album as a whole, and carries you out of the trippy atmosphere that is PVT’s Homosapien.

If you listen to this album, expect the unexpected. Listening to this record is a completely unique experience, and it shows that PVT is willing to continually evolve as a band instead of just sticking to what’s worked for them, which is a breath of fresh air in a time when plenty of bands just stick to the same formula time and time again.