Last Sunday night I was lucky enough to catch an amazing performance from Canadian duo, Purity Ring, which is by far the best gig the Zoo has ever hosted (in my opinion). From the live videos I’d watched of the band, I was expecting something pretty cool, but my expectations were well and truly exceeded. Purity Ring plays a genre of music that quite an astute Rdio listener has described as ‘gollum rock’ – a style where you can’t help imagining that this bizarre atmospheric electro was conjured in a deep cave, with rock pools and the uncoordinated bopping of Smeagol himself.

We arrived unfashionably late, unfortunately, and missed opening act Tincture – a mate from Uni, who I saw in the crowd and didn’t even know was playing. Anyway, definitely check him out; he’ll be gigging around Brisbane and the surrounding areas in the very near future! 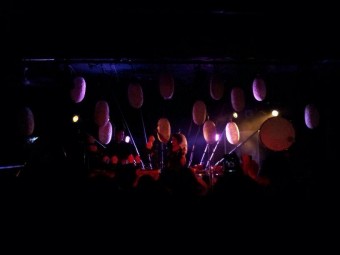 For those of you who have seen Purity Ring live vids will be familiar with their onstage setup. Essentially comprised of a DJ desk, producer and chief beat-maker Corin Roddick has manipulated his equipment to allow him to control both lighting and synthesizer sounds through his eight ‘bulbs’. He uses these as a percussive instrument, which emit synth notes. Overhanging their DJ table are countless cocoons, which glow depending on the volume and frequency of the music. We then come to Megan James, the intriguing vocalist, who sings about all sorts of messed up shit. She stands there for the duration of the show, bent over screaming at the ground, while Roddick manipulates her voice through his system.

James states in some of her interviews that she’s concerned that live DJ performances can be really boring and tedious, and that they want to make an effort to make their live show something special, rather than simply reproducing their debut album Shrines. They certainly ticked that box, and the unique, complex setup lends itself to a fascinating and entertaining live performance.

The most impressive part of their show was the care they took in building their set. This was achieved by increasing the intensity of the visceral factors and the musical dynamics gradually as the show continued. This had the effect of making the audience go crazier and crazier for every single song, until gradually peaking with their lead single “Fineshrine”. 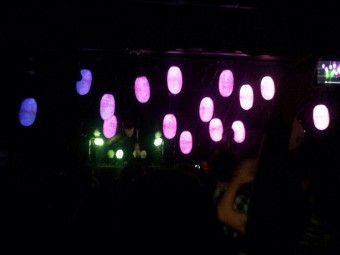 Roddick looked like the coolest motherfucker chilling behind his table. He had the crowd foaming every time he hit his bulbs, at times extending sections so that he could solo for ages. He really knew his instrument back to front, and it gave him so much more freedom and creativity than if he was just using a DJ deck. The duo had great interaction with each other, with James often coming over to finish off the last couple notes of a phrase.

It was a perfect show; one which ran completely smoothly despite the minor screw up where Megan got so carried away with banging her gong that she lost control of her mallet and it falconed some poor fella in the front row.

Whatever you do, don’t miss these guys when they’re next in town. It’s one of those things you can’t overhype – thank god, because I’m doing one hell of a job of it – and one you’ll walk away from thanking the group for performing something far beyond a mere reproduction of their record.