REVIEW: Daughter – If You Leave

Life is exquisitely cruel. For those of you who don’t agree, listen to If You Leave, Daughter’s depressingly stunning debut into the musical realm and you will soon be convinced. The beautiful Elena Tonra tears open her inner demons and throws them down on top of haunting melodies for us to enjoy.

The experimental folk trio from London, featuring guitarist Igor Haefeli and drummer Remi Aguilella, had only released 3 EPs before being signed by 4AD, the same people that brought you Bon Iver, Grimes and Purity Ring.

Their debut album has been highly anticipated, due to the success of the EP Wild Youth, with lead single “Youth” receiving 8 million Youtube views. However, their first full length album If You Leave has received harsh reviews from NME and The Guardian, who thought it much too depressing and sorrowing. To quote NME “why not go embrace the mainstream and write some songs that can swim?”

It’s easy to see where they’re coming from with lyrics like “two hands digging in each other’s wounds, cold smoke seeping out of colder throats” and “I sometimes wish I’d stayed inside my mother, never to come out”. However, as much as I love NME, I have to disagree with them here. Daughter creates dramatically beautiful music, even if it is in a non-mainstream “slash-your-wrists” kind of way. 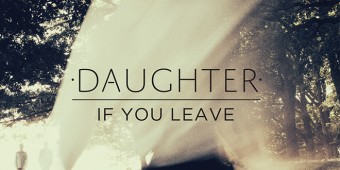 A noticeable influence on the album is the contribution of Rodaidh McDonald, who produced both of The xx’s albums. The ghostly background behind Elena’s singing is tantalisingly reminiscent of this.

The opening track, “Winter”, chills you with intense lyrics like “I needed you to run through my veins, like disease”, speaking of love lost. It set the bar high for the rest of the album, but I was not disappointed. The lyrics of each song cut to the bone; Elena isn’t afraid to sing about love, loss, hurt and even abortion in “Lifeforms”. She has a great voice, and sings to her advantage in sad wispy waves. Her gentleness makes it easy to connect with her, and sympathise with her longing. The middle of the album gives way to two slightly more upbeat songs, “Tomorrow” and “Human”, with stronger drums and a faster tempo. Although the lyrics are still depressing, it wakes you up from the sleepy guitar undertones of “Still” and “Lifeforms”. From here, the songs creep back into slow moodiness, ending the album with a sad grace.

The album is a mesmerising exploration of Elena’s innermost fears and doubts, and leaves the listener in what can only be described as intense melancholy.

Daughter are on the eve on their European tour, so if you’re headed that way definitely try to catch live the creepy beauty that is If You Leave.

One response to “REVIEW: Daughter – If You Leave”