The cosy underground club Alhambra was the perfect venue for the mind fuzzing dream-pop tunes of Wild Nothing. They took to stage amidst the crowd of young, shoegaze loving fans. This was the band’s first performance in Australia and they began their tour spectacularly. A warm vibration filled the room as frontman Jack Tatum led the five-piece band into tracks from both his first album, Gemini and the 2012 release Nocturne.

As a band that began from one teenager’s musical tinkering on his college computer, Wild Nothing have really come into their own. With Nocturne, a lot more thought was put into how songs would be played live, although there was some indulgence in unplayable ramblings in songs like “Paradise”. Jack often speaks of Wild Nothing as two separate yet interlaced entities: his studio production vs the band’s live performance, likening it to covering their own songs.  The digital synth of the produced tracks evolved beautifully into hazy rock, and the lanky, neatly dressed Americans showered us with waves of mellow tunes.

They began with “Shadow”, the opening track from Nocturne, a well-loved and catchy tune which received head bobbing and foot tapping from the majority of the crowd, with a couple of wilder folk up the front having a bit of groove. As the songs progressed, the crowd loosened up and swayed and moved with the music. “Only Heather” was a big hit, as was the final song of the evening “Summer Holiday” which was Jack’s first single release. He also surprised us with a cover from Brisbane’s very own The Go Betweens.

Overall, they are a shyer band and just getting comfortable performing live, don’t expect any incredible stage dives, knee slides or even jumping around stage. However, this doesn’t mean that they are boring to watch, as Jack has a strong emotional connection with a lot of the songs and it shows through the sincerity of his singing.  This really highlights how personal these albums, especially Gemini, are for him, and he has no qualms about sharing his innermost thoughts and feelings, which made the performance incredible to watch.

Later in the night, some of the drunker fans began shouting for Jack to take off his jacket, to which he obliged and got a massive cheer from the crowd as he revealed his blue and white stripey tee. He also chatted to us between songs about holding a koala for the first time, and how excited he was to be in Australia. The whole show had a relaxed and chilled vibe, Jack interacting with the crowd and giving in to hugs and high fives from the front row fans. It was easy to talk and get photos with him after the gig, which is why I love the small venues so much more. I felt that Wild Nothing were really in their element and I cannot wait for their next album to come out. 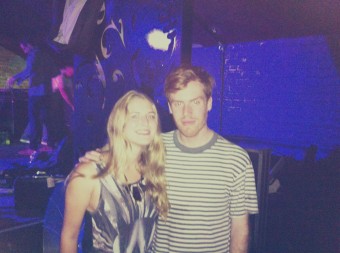