I think I made the right call by opting to see Stone Roses at their own show at Brisbane’s Riverstage rather than braving Future Music Festival just to see the legendary rockers. That being said, their live show was interesting to say the least.

Famous for their seamless transitions from arms-around-shoulders sing along track to dance-punk jam sessions, it was pleasing to see that John Squire could still rock out for an hour and half. In fact, his guitar work was absolutely sublime, making every song look effortless. Mani and Reni were solid, with Mani’s famous paint splattered Rickenbacker making an appearance as he quietly grooved out dance influenced base rhythms and Reni sporting the iconic bucket hat (there were a few in the crowd as well) as he looked ever so casually produced brilliant off-beat percussion. Nevertheless, the story of the night was definitely the antics of Ian Brown, who proved he still has what it takes as a performer and singer. Admittedly, it felt as though his voice took a few songs to get into it, but once he had warmed to the task he sounded fantastic. 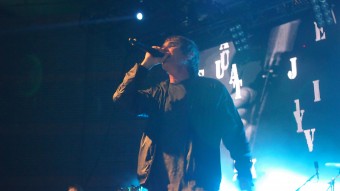 The gig ran relatively smoothly despite the odd hiccup, including rather comically, Ian Brown stopping the show during “(Song for My) Sugar Spun Sister” to “fix that fucking bass.” The song did sound a bit flat and something needed to be fixed, though there is no question it was a bit of a momentum killer after coming out firing with crowd favourites “I Want to be Adored” and early release “Mersey Paradise”. After this stoppage it felt like they were just going through the motions a little, but that all changed as an epic medley of “Fool’s Gold”, “Waterfall” and “Don’t Stop” began which lasted for over 20 minutes. They really showed off their musicianship in this medley and looked like they were really enjoying themselves. To top it off, Ian Brown answered something that has been bugging me for a while, and showed what a singer does in these big jam sessions. Tambourines held aloft in each hand, he posed for the crowd and promoted a real party atmosphere. The manner in which they handled “Don’t Stop” was particularly impressive, again transforming the song into an almost club feel. 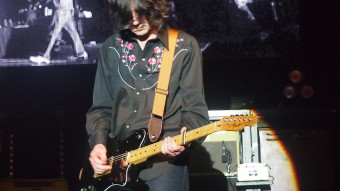 The show wound down to an end with “She Bangs the Drums” and “I Am the Resurrection”, which can only be described as euphoric. “I Am the Resurrection” was the highlight of the night due to quite a few reasons. Firstly, the chorus and crowd involvement was really spectacular, secondly the jam session to end the show, and Ian Brown’s most bizarre exit. Finishing his duties singing, he promptly grabbed his jacked at and walked off without saying a word. I admit I was a little taken aback by this charade, but he returned five minutes later in a new set of clothes to give a warm thank you to the crowd. When all is said is done, it was a fantastic show as the Stone Roses proved they’ve still got it and left us wishing they had done more. 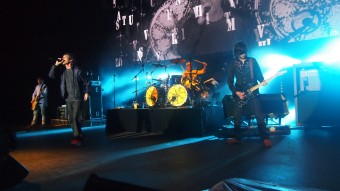