Brought to you by Time Off, Spotify, Universal Store, Amplifire and Mucho Bravado 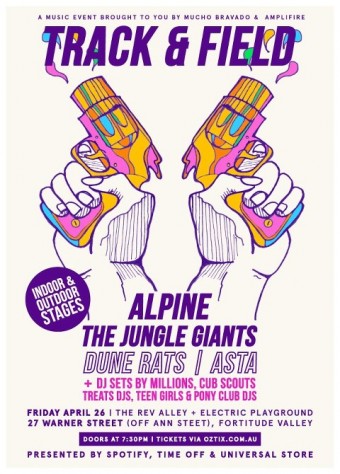 Boutique music event – TRACK & FIELD – returns to Brisbane and will be held in its most ambitious and most exciting location yet. In somewhat of a precinct takeover in the heart of Fortitude Valley, the party will consume live music venue Electric Playground and feature, for the first time, an outdoor ‘Alley Stage’ behind it and The Rev on Warner Street FRIDAY, APRIL 26.

THE LINE-UP
Heading the bill on the outside Alley Stage is the impeccable Melbourne sextet ALPINE who will be fresh off the plane from their most recent appearance in the USA for South by South West. Their glistening and sophisticated pop music has quickly awarded them a lengthy list of accolades while their debut album – A Is For Alpine – and its string of radio hits – ‘Hands’, ‘Villages’, ‘Gasoline’ and most recently ‘All For One’ – all points towards a growing reputation as one of Australia’s best young bands.

Brisbane upstarts THE JUNGLE GIANTS have similarly garnered a rabid fanbase through tireless hard work and an uncanny knack for penning dynamic indie rock as demonstrated on two EPs and a pair of radio-hits – ‘Mr Polite’ and ‘She’s A Riot’. The band is currently recording with producer Magoo and will Track and Field will be the first opportunity for the band to showcase new songs off their upcoming debut album.

Bringing the notoriety and a bit of controversy to the lineup is Brisbane punk, party-starters DUNE RATS. Experiencing a rapid ascent into the psyche of Australia’s music lovers, the duo have not only demanded attention via cracking tunes like ‘F*ck It’ and ‘Red Light Green Light’ but also through what can be described as rockstar antics.

All the way from Hobart, the gorgeous and super-talented starlet ASTA is making the trek and bringing with her a show rarely seen up here in Brisbane. Leaping to prominence with a win in triple j’s Unearthed High competition, she certainly can back it up with the tunes and has done so with ‘Escape’ and ‘My Heart Is On Fire’, a track that secured a #50 place in the Hottest 100.

Grab your tickets from oztix.com.au