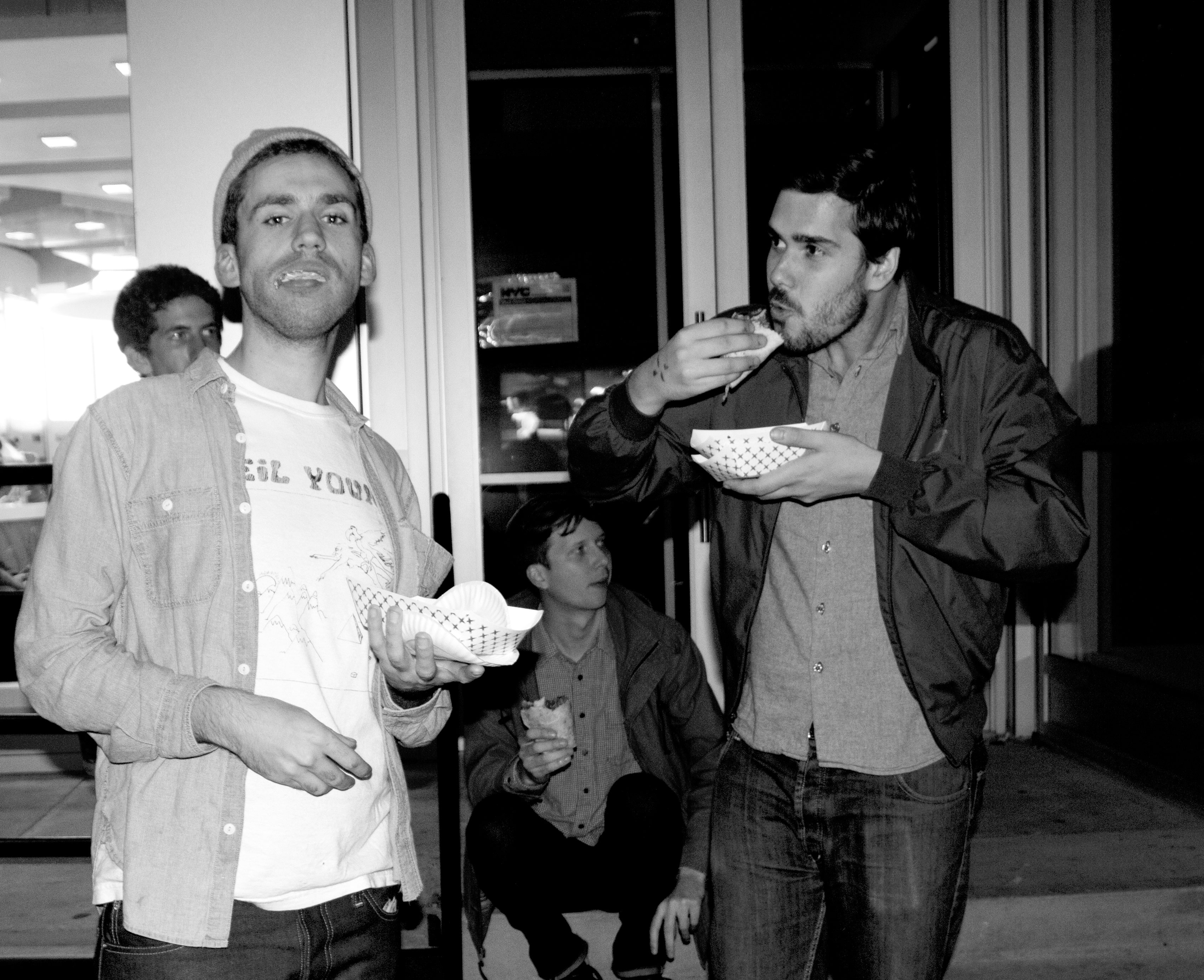 If you haven’t listened to Parquet Courts debut record yet, stop reading this, drop what you’re doing, and get to it. These boys are the real deal. Dripping with attitude and paying not-so-subtle homage to the greats of ages past (The Velvet Underground, The Modern Lovers), they write songs that cut through the crap and hit like a ton of bricks. Guitarist Austin Brown plays angular riffs laced with enough acid to keep up with Andrew Savage’s lyrics packed with nuanced intelligence and the driest of humour. “A minute of your time?” asks Savage on stellar opener “Master Of My Craft”, “For-geeet about it!” And then to close out the track, “Ya know Socrates died in the FUCKING gutter!” Debuts like this don’t come around too often.

We had a yarn to bassist Sean Yeaton about living up to the hype, embracing Australian slang, and taking peyote in the Mexican desert.

Scenewave: Light Up Gold has turned into a real cult hit over the past few months, there’s a huge amount of hype surrounding Parquet Courts and already anticipation about what you’re going to do next. Were you expecting this sort of reaction? 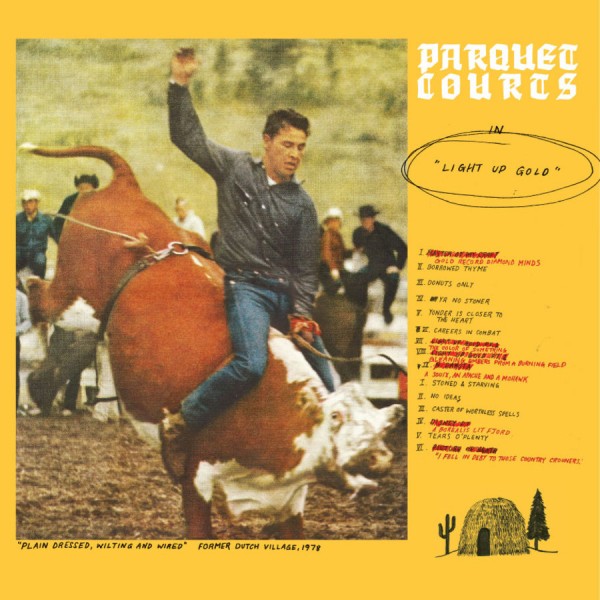 Sean Yeaton: Yeah no not at all man, it was really pretty random. It was sort of just like, I’ve known Andrew [Savage, lead vocals and guitar] for a really long time, he moved to Brooklyn with Austin [Brown, guitar] and they asked if I wanted to play with them. And I did, and I guess we were just sort of goofing around and we recorded that record in just a couple of days. So I definitely never expected it could turn into whatever it has become.

SW: Well it’s just taken off, it’s getting massive buzz all around the world. Does that sort of pressure and expectation affect how you play and how you think of yourselves as a band?

SY: I don’t know, I mean we’ve all been in bands before, and we’ve all been on tour, so it wasn’t really a totally crazy change, although the reaction has been very crazy. I think that at the end of the day we all kind of knew what we wanted to do with the band sonically and that hasn’t really changed. If anything we’ve just become better friends and do a lot of quirky stuff together which is cool.

SW: A lot of Parquet Courts sound is rooted in bands from a past era – The Fall, The Velvet Underground, a bit of Guided by Voices. I’ve heard you compared to the Modern Lovers a lot in particular. Do you guys ever feel trapped at all by these comparisons? Just as in are you conscious of trying to break new ground with your music and being appreciated for your own contribution to this genre?

SY: I think it’s kind of funny, I mean we all like all of those bands, and I think people who make those comparisons are certainly wise to make them, but they seem kind of obvious comparisons to make. It’s not like we really try to sound like those bands, we all listen to a lot of different stuff, so you get each band member bringing a lot of their own thing to the table and that kind of creates what our sound is. For sure we listen to those bands you mentioned, and they’re influences, but we’ve all been in a bunch of other bands that sound totally different. I guess Parquet Courts mission statement is that we’re a punk rock band, and we don’t try to over think it any more than that.

SW: Those comparisons are really more of a compliment than anything else, I feel like there’s a lot of bands out there who sound like the Velvets who don’t get the shout out because they’re kind of shithouse.

SY: Haha sure. I think honestly a lot of it is just that you can communicate by saying ‘play a Velvets piece’ or ‘let’s have a Modern Lovers sort of style’, I mean we don’t necessarily speak in that vernacular but those are bands that define the genre. I mean nobody would necessarily compare the Velvets with Modern Lovers directly, but I think we do kind of draw from both of them in way. At the end of the day though it’s just story-telling punk rock music, and a lot of the bands that people compare us to are the same, just stories put to music.

SW: Are there any modern bands which you are particularly digging at the moment?

SY: Oh man you guys in Aus have the best bands. At the moment I’m loving Total Control, UV Race, I love Eddie Current Suppression Ring. We are all kind of in a music scene, our friends have this band PC Worship around here, they’re awesome. But honestly I feel like in Australia you guys have it really figured out.

SW: We do. Actually I was checking out what you guys have been up to lately and I saw you played a show with an Aussie band who we’re pretty into called Scott & Charlene’s Wedding.

SY: Oh they’re from there!? That was a really fun show.

SW: I thought you guys might have bonded over a love of really obscure band names.

SY: Haha, I definitely talked to their bass player for a while. We played on this really weird stage where the bass and drums were up higher than the guitars, very weird…

SW: Putting the bass up on the pedestal where it should be.

SW: Noisey has just released a documentary that follows you around on part of your tour through Mexico and the UK. The footage seems to be split about 50 50 between playing shows and taking drugs – tell us a bit about your peyote experience in the desert.

SY: Oh boy. Honestly that experience in and of itself was really remarkable. It was just a bunch of kids riding horses into the desert as the sun was going down. It was one of those moments where you’re just like, wow, there’s really no reason that I should believe that I’m going to make it out of here alive. For me, peyote or not, the most magical experience of that was getting to meet these people who open up their community to a bunch of people who didn’t really know what they were getting themselves into, and showing us something really beautiful and unique. I got to see the world from a new perspective, that I would’ve been able to see whether I was eating psychedelic cactus in the desert or not. For me the whole experience was really beautiful and pure in a lot of ways.

SW: I don’t think you could even get a hold of peyote in Australia, maybe a trip to Mexico is in order.

SY: It is an endangered plant, which adds a whole other aspect to the whole thing. It’s not like its readily available and it’s illegal to harvest so whatever is left in the world is what’s left in the world. It’s very difficult to find. There are shamans involved and all sorts of things, it’s pretty intense.

SY: Oh god, no one’s ever asked me that before. Let me ask my fiancé…. She likes “Careers in Combat”, that song is really good. She thinks I look good when I play it. It’s also really easy.

SW: Light Up Gold is only about half an hour of music, how do you flesh out your live sets? Just banter between songs? Any covers?

SY: We have a few covers that we screw around with. Honestly our setlists come together, if they come together at all, just as we walk on stage. For the most part we just get up there and figure it out as we go along. It’s more like the first side of the record and then just goofing off for the rest of the set.

SW: I know this is just a disgustingly generic question – but I don’t think I can get away with not asking it – how on earth did you settle on the name Parquet Courts? It’s like a type of basketball court or something?

SY: Aha yeah, Andrew came up with the name but it’s a reference to the basketball court wood panelling pattern that the Boston Celtics play on. I’m from Boston, I don’t know how much of an involvement I had. Mostly we just really love the way the two words sound next to each other.

SW: Have you guys got any plans to head to Australia in the near future?

SY: I think so, I’ve definitely heard as much in the rumour mill. I hope so.

SW: We’re thirsty out here for a bit of Parquet Courts.

SY: Yeah that’d be fun. I want some of that Bundaberg Ginger Beer, you can’t get it anywhere around here.

SW: Ha yeah that’s a can’t miss. And the other thing is Bundaberg Rum.

SW: Have any of you been to Australia before?

SY: I came to Australia a couple of years ago, but I’m the only one.

SY: I liked it. I was down in Australia in 2009 with a different band I was in at the time, and the bass player of that band’s last name is Bogan. And I had no idea that that was a derogatory term in Australia. So needless to say, basically everywhere we went with him was just like being part of a hilarious joke. It got to the point where we would start every set by saying “Guess what? Our bass player’s last name is Bogan! How crazy is that!” and people would just give him shit all night, it was great. But we had a brilliant time, it was perfect timing for the whole thing.

SW: Thanks for chatting Sean, hope to see you over here again before too long!

Parquet Courts have just signed to label Create/Control for the Aussie release of Light Up Gold, so (fingers crossed) a tour Down Under would seem to be in the works! While you wait for developments, check out “Borrowed Time,” (above) the first single to be lifted from the LP, and then the Noisey “Light Up Gold Road Trip” documentary (below). If you haven’t heard Parquet Courts yet, you’re in for a treat!