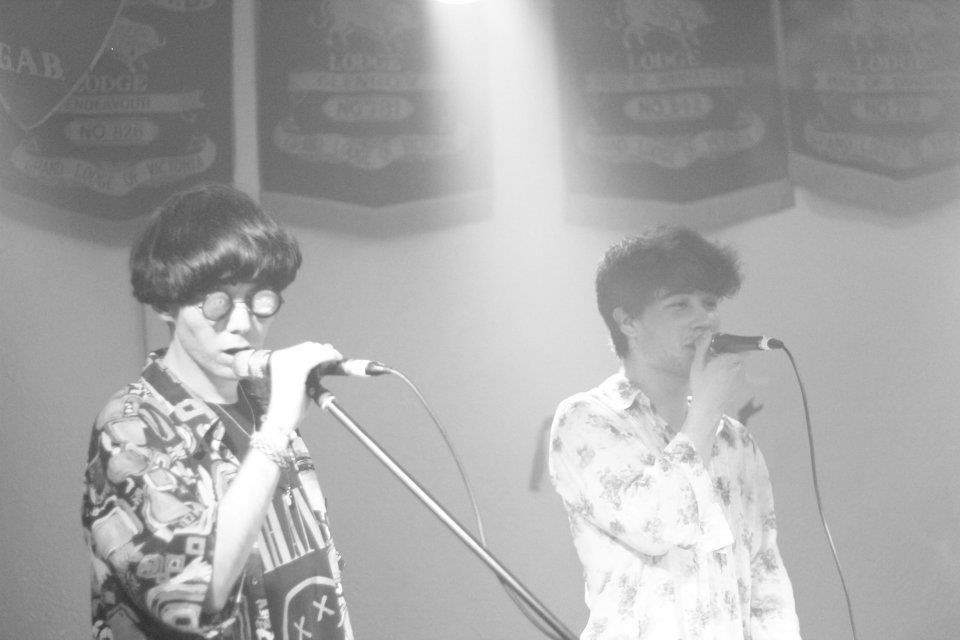 The first time I saw Collarbones was last year at OutsideIn Festival at The Factory in Marrickville. A small but packed boutique hipster event, and my first electronic-focused festival. I had the time of my life.  It mostly showcased semi-ambient electronica, or ‘space sound’ music as I like to call it.

I had never heard of Collarbones until I saw them play, and they blew me away. It left a lasting impression on me, so I jumped at the chance to see their set at New Wave: Sound, two days of sonic exploration, part of Vivid Festival. It was a journey through the avant garde, the electronic, sounds unlike any you’ve heard before. Apparently one of the earlier gigs of the day had involved the entire audience wearing blindfolds, and another involved smoke machines.

The Sound Lounge, in the Seymour Centre, is tiny, carpeted with drapes covering the walls. I was sat at one of the little round tables sipping some wine. The other 40 or so people were also sitting around the tables, or leaning against the back walls – the small space clearly left for dancing was empty.

The stage had two tables on the left side, overflowing with macbooks and effects boards. Centre stage featured a large projector screen showing a hooded young man in front of a luscious green backdrop. Collarbones had collaborated with Parisian artist Michael Salerno for the event. Throughout the set were continuous clips of various adolescent boys making arbitrary motions such as flicking their hair repeatedly, and walking through the leafy backdrop.

Honestly? I didn’t like it. I found it a little pointless, a little pretentious. Luckily, Collarbones were neither.

Collarbones make this really awesome blend of spacey electronic music, ambient at times, dancefloor heavy at others. Sydney based Marcus Whale sings over the sounds, and he has a sublimely beautiful voice. They seriously stand out from the dime-a-dozen electronic producers filling the clubs of Sydney.

Their set began with some slower, ambient tracks which were really beautiful, although the acoustics didnt do it justice, it wasn’t loud enough and the sound technician hadn’t quite reconciled the electronic sounds with the vocals, which stood out a little too much. I still really enjoyed it, though.

About halfway through, Marcus suggested that the audience move a little closer, stand up, or dance a little, but no one did. You could tell it was awkward for him and Adelaidian Travis Cook, obviously more accustomed to playing at clubs packed full of young, sweaty people. This was a tiny, half empty room with a completely empty dance floor. Dance music, with nobody dancing? What?

Two songs before they were meant to end, Marcus announced, “Okay, we need everybody to get up and turn this place into a rave cave for five minutes.”

And so we did. Instantly, the entire vibe changed completely.

It was one of my strangest musical experiences to date; watching a tiny room with a quiet audience sitting on chairs, sipping their drinks, suddenly get up and start dancing like amphetamine-fuelled madmen.

It was two completely different shows in one hour. It was great.

The five minute designated rave song didn’t end the show, though. Now that we were up and dancing, we weren’t about to sit back down, so they kept playing. Travis and Marcus joined in the dancing, flailing about, loving it. Travis pulled out this trippy, multicoloured flashing lightsabery thing. It really was a pop-up rave cave.

Fifteen or so minutes later, we were asked to sit down for the last song.

Marcus sat at a piano, semi hidden by the projector screen, and began to play and sing. No microphones, no computers, no pedals. It was raw, ambient, sublime and heartfelt. The perfect way to end such a unique yin-yang of an evening.

It was wonderful to experience Collarbones in such a drastically different way to their set at OutsideIn, and I’m so glad that I did.

Collarbones are a duo to watch out for. They know what they’re doing, and they’re doing a damn fine job of it.