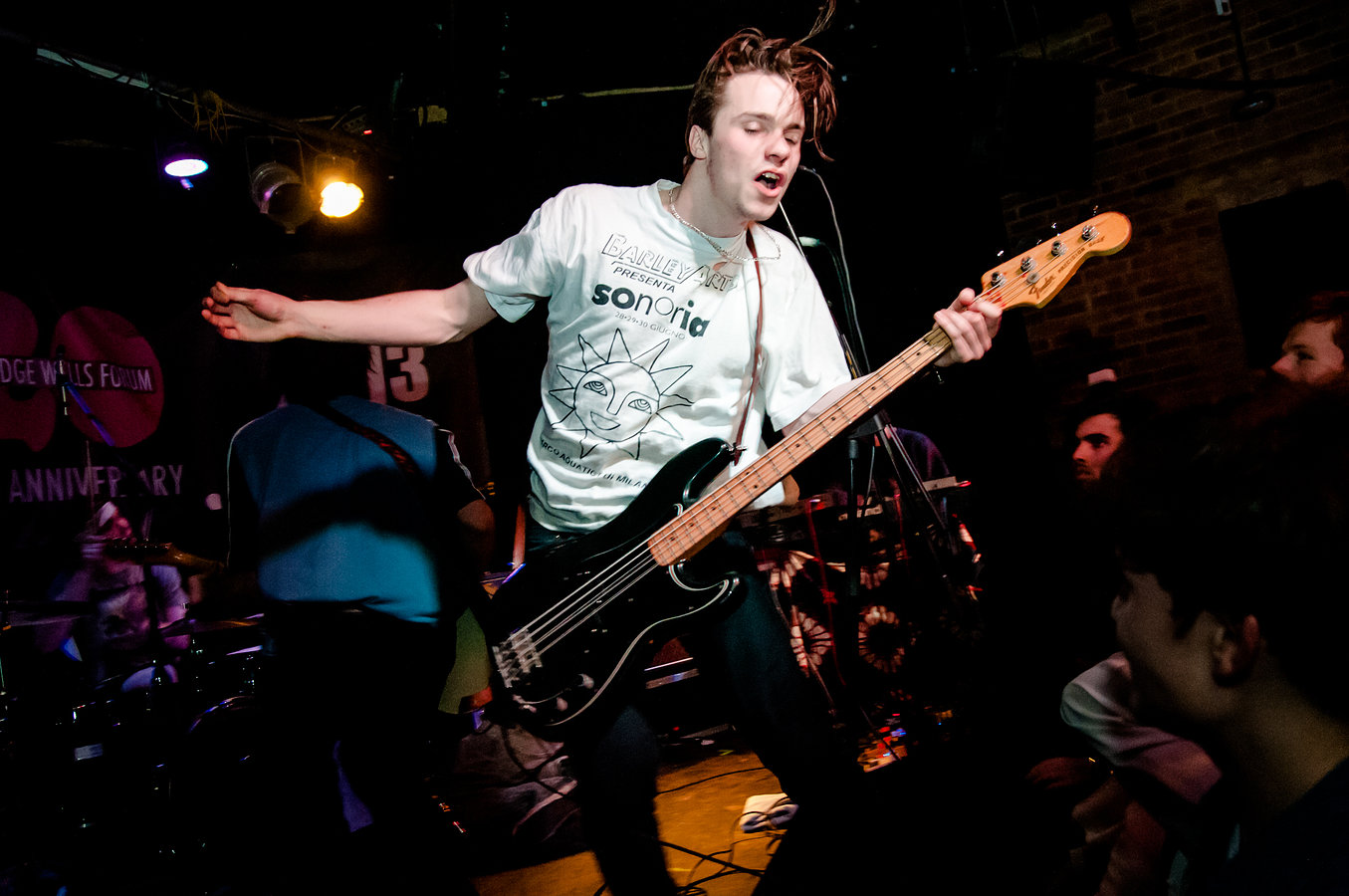 Giffo catches up for an interview with Chilli Jesson, bassist and vocalist for Palma Violets – the band single-handedly resurrecting UK guitar rock right now – ahead of their debut visit to Australia for Splendour in the Grass.

Palma Violets have a fascinating story. The band met around a fire at Reading Festival, with Chilli originally offering to manage Sam (vocalist and guitarist) after hearing him play guitar. From there, a failed stint at band management – of which they unsuccessfully attempted to sign bands such as WU LYF – saw them start Palma Violets with Will (drummer) and Pete (keyboard player). Chilli had no experience playing bass whatsoever, and had to learn on the job – you’ll later read that the first song he learnt was a Palma Violets’ original, “Rattlesnake Highway”.

The Lambeth-based four piece’s inspiration for starting a band was that they were “bored in London and wanted to give their mates something to dance to”, and that they were sick of going to live shows where none of the bands gave a shit about the music they were creating. When starting up, they had quite literally no online presence: no soundcloud, facebook or twitter. All they had were these loose parties they’d host for their mates in the basement of 180: their home, which has since become a recording studio.

These parties created massive buzz around London and resulted in a bidding war between record labels – see song “Step Up For The Cool Cats”. This saw them take record label executives for everything they could; including and not limited to free cigarettes, food, beer and any other free shit that they could score from them. They kept this up until they landed on Rough Trade Records, home to The Smiths, The Strokes, The Libertines and The Mystery Jets.

We caught up with Chilli to find out about learning bass guitar on the job, the biggest player in the band, stage invasions, basement parties where anything goes, and the band’s unique three take recording policy.

CHILLI JESSON: Calling from Holland man, the one where Eddie Van Halen was born, also known as the home of Heineken.

SW: I assume you’re enjoying the luxuries of Dutch life?

CJ: Yeah man, all the pastures are green, the crops look great, it’s beautiful out here.

SW: We heard that while recording 180, you used a three-take policy on all your songs. Was this because you hated the idea of sitting down and recording for hours on end?

CJ: We didn’t hate it, we just didn’t know what we were in for at the time. Steve Mackey [producer of 180] made it really enjoyable. What kept us sane was the three-take policy, which we stuck to on every track. It really captured the energy, which is what the band’s about. It was good because we weren’t just faffing about, you know.

SW: Tell us more about how you hadn’t played bass before joining the band [“Rattlesnake Highway” was the first song he ever learnt on bass!] and how this impacted on the sound of the record.

CJ: Well luckily Steve Mackey is a bass player so I learned a lot from him. There are a lot of mistakes on that record, man. None of us are really that good at our instruments. None of us can really play apart from Pete and Will. I’ve never been a vocalist in a band before, so it was all really fresh. I think that made it quite endearing, you know.

SW: So you hadn’t done much vocal work prior to the Palma Violets?

CJ: No, you can tell haha. My voice is fucked. 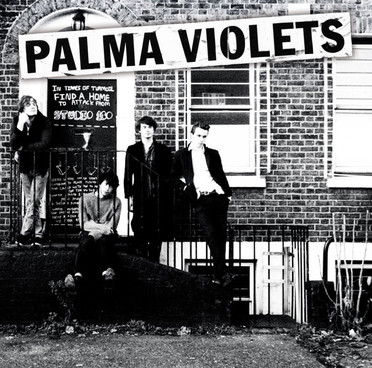 SW: You had a stage invasion a few days ago at Great Escape Festival, how’d that go down?

CJ: Well we’d only just come back from touring the States and then played this secret show at Great Escape [which was their first gig in Britain outside the studio] and because we’d been away for five weeks there was this massive energy around. It was such a good feeling to have that happen. We hadn’t been in Britain for five weeks then we came back and it just reignited. It just kicked off was fantastic.

SW: How are you going to invade the stage at SITG?

CJ: Oh man, get everyone on! That would be great. I’d love everyone to come on. Australia is the one place I’ve always wanted to visit. It was weird, and I only just realised the other day, but all of my girlfriends have been Australian. How weird is that? You guys must be doing something right.

SW: Do you have any pre-gig routine you swear by?

CJ: We don’t, no. Apart form on Saturday we created a human pyramid backstage. We’ll do it at Splendour probably. I’m the lightest so I’m right at the top holding the star.

SW: Is the rest of the band single? Who’s the biggest player?

SW: When did the shows you hosted in 180 become bigger than just your mates?

CJ: It all spread naturally through word of mouth and then, yeah some people heard about it, then their friends told their friends and so on. It didn’t necessarily get too big, because we just went on tour really. That stage invasion was the Brighton Great Escape festival, which was our first gig outside the studio. That’s why it was such a huge occasion. This time last year, we played our first show outside of the festival.

SW: What’s been the loosest party you’ve hosted at 180?

CJ: Man, they’re all mental. Every single time we had down there was crazy. The police didn’t know about it, no one knew about it, it was beautiful. Anything goes. Nothing like going to the normal pubs and clubs; everyone just having a great time.

SW: Are you aware of the facebook page called ‘Chilli Jesson’s Hair’? Is has about 150 likes…

CJ: (in background to rest of the band) Haha there’s a page for my hair! Haha fucking great, 150 likes! Im glad someone’s appreciating it. If they saw it now they may not be so impressed.

SW: 180 was such an experience, and you’ve said that it will always remind you of one distinct memorable period of time. Do you think you’ll stay at 180 for record number two or will you find somewhere else so as not to tarnish what happened there for 180?

CJ: Oh no we’ll stay at 180. All our gears there and everything. We’ll never leave. That’s our home, man. Lambeth is the place for us.

SW: You’ve previously joked that you want to beat Muse to the moon. If this were the case, which song would we play when we got there?

CJ: “Last of the Summer Wine”.

CJ: How old are you…

SW: Two options: having never made it in music and going back to work in the clothes shop in London, or being a member of One Direction?

SW: Do you have any questions for us as Australians in general or as music fans?

CJ: Are you guys as nice as you’re made out to be? Everyone from Australia that I’ve met is always really nice.

SW: Yeah I think we’re friendly and good hosts. We’ll make sure we show you guys a good time for Splendour in the Grass!

You can catch Palma Violets either at Splendour in the Grass (if you’ve been lucky enough to get a ticket) or at one of their sideshows:

Hit up Secret Sounds for tickets to these concerts, they’re live show is bloody brutal.