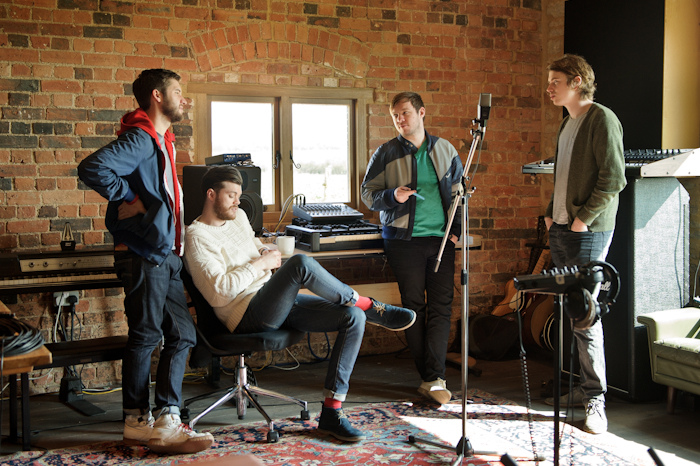 Everything Everything, who some have labelled ‘the cous cous of the music industry‘, are touring Australia after the release of their manic sophomore album Arc. Their bass player, Jeremy Pritchard, had a chat with us last week and provides some fascinating insights into common misconceptions of the band, how to deal with clashing with the Stones at Glastonbury, and also answers a few silly questions at the end, just cos he’s a fun guy.

SCENEWAVE: Where are you calling from?

JEREMY PRITCHARD: Manchester, I’m home for a couple of days.

SW: How was Glastonbury?

JP: So great. We only ever have good things to say about that festival. As long as the weathers good I think it brings out the best in everybody. I thnk there are few things in this country that do that.

SW: You clashed with the Rolling Stones at this year’s festival. How did this go?

JP: We thought it could go either way, either it’d be completely dead because everyone has gone to see the Stones or it could be that enough people don’t want to see the Stones. I was thinking about it before the festival and thought that nobody says that they’re a fan; no one says they want to go and see the Stones. Then at the festival everyone said, “Oh yeah we’re going to see the Stones tonight, we might not catch you guys.” But on the night it basically meant that it was in between, the tent was half full but everyone who was there really wanted to be there, and so there was such a good vibe. They are literally the biggest rock band in the world, so we didn’t take it personally.

SW: It seems like you guys have exploded recently. What do you attribute this to?

JP: Well, the first record was just growing all the time while we were making the second. By the time we had stuff to release from Arc, there was a lot of residual support and interest and a lot of people waiting in the wings ready to receive it, which we were really surprised about. I think that that’s partly because this record translates better, and that the story of the band has spread that bit further.

In terms of radio, it’s gone way better than we ever thought it would, especially with the first 2 singles from Arc: “Cough Cough” and “Kemosabe”. We were sort of thinking that they would be a bridge between the two albums. And they did better than that.

SW: They did very well over here as well.

JP: Again that was something we weren’t expecting. We’ve never been to Australia. We had very few preconceptions and we certainly weren’t expecting that and just can’t wait to be coming at the end of the month.

SW: What do you expect from Splendour in the Grass?

JP: It’s like it will be a really cultured festival, like a cool European festival in a way. I think the lineup has been really well chosen.

SW: What are your thoughts on Mumford & Sons headlining? There’s a bit of hatred for them over here at the moment, with a lot of people surprised they’re the headliner.

JP: Yeah well that’s what everyone said about them at Glasto, but I think when they really get down to it, people realise why. They can fill those boots. They’re not really my thing but we’ve played with them a couple of times and they’re really nice people. I think they have a really healthy attitude towards touring and working hard and enjoying their music. I like that they’re not jaded. That’s quite rare with British bands.

SW: Mark E, Smith from the Fall recently threw a bottle at them on stage and called them ‘a bunch of retarded Irish singers’.

SW: What do you make of your sideshows in Oz? How do you look forward to them compared to the festival?

SW: It seems that it doesn’t take a lot of talent these days for a band to produce a successful record. Do you think that indie music has become too basic and simple? How does that make you feel considering the complicated and experimental nature of your music?

JP: I don’t think there’s any inherent inability in being complicated, that just happens to be the way we are. It is slightly depressing that music that sells in any genre is more basic and easier to digest, and takes less work on behalf of the listener. But that’s basically been the case since 1957, really. That’s nothing new. We just kind of do what we do and try to keep challenging ourselves. We’re surprised basically that we can be on the radio at all. We like it but we don’t tailor any of our music for any of those conservative tastes at all.

SW: Which other band in the world do you admire for their musicianship?

JP: Foals are great players; HAIM are awesome, really tight band. Loads of bands that play well. Bear Who is another.

SW: What do you think is the greatest misconception about the band?

JP: I don’t know if this counts but in UK theres an impression of us as being a slightly cold, scientific, party band… a calculated party band if there can be such a thing. With this record in particular and in general, we’ve been trying to be a bit more emotional in terms of our responses to music. We learnt a lot from the first record about how people were really impressed mentally and technically by what we were doing. But that doesn’t affect you at all, so we wanted to have an emotiaonal affect on people. John has especially tried to take off the mask a bit between these two albums, and be express ourselves a little bit more.

I think that maybe people are confused by the technicality of the music, the occasionally technicolour nature of our sound and the singles in particular. But theres a lot of agility and vulnerability there that I think gets overlooked.

SW: Describe your current mood as a song title.

SW: If by some freak occurrence you found yourself on The X-Factor, what would you choose to serenade the panel with?

SW: If you were a wrestler, what would be your entrance theme?

JP: “This Charming Man” by The Smiths.

The Everything Everything sideshow tickets can be purchased from here. They’re playing this Friday (Melbourne), Saturday (Sydney) and are playing the Mix-Up Stage this Sunday at 5pm for Splendour in the Grass.