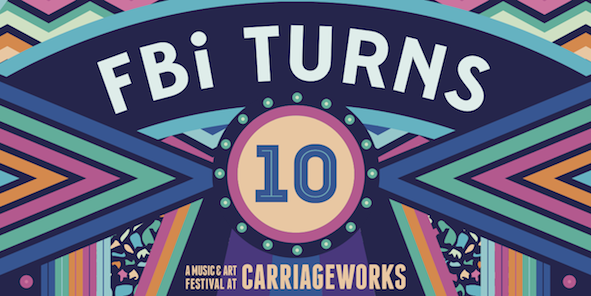 Sydney’s best independent music radio station FBi turned ten last week, and celebrated in style this Sunday at Carriageworks. There was a fantastic crowd, incredible homegrown talent, delicious food and more. There was smiles all around and it was a testament to just how much support, love and respect FBi has garnered over the past decade. This is how all birthdays should be celebrated.

8000 punters descended on trendier-and-trendier suburb of Redfern from midday for the sold out event. The weather had been a little drizzly in the morning, but cleared up and was so perfect all day; sunny but not too hot, cool enough that you got a break once you left the crowd, and the most perfectly subtle rain greeting us at the very end of a sweaty dance-filled day.

We arrived a couple hours late and proceeded to scuffle about, figuring out the token system that was in place on the day. We brought cash in with us and exchanged them for tokens to buy food and drinks. It seemed a little annoying, but it would’ve saved a lot of time and effort throughout the day. The one problem was that I had quite a few left over and there were no refunds on unused tokens.

The first act we caught was Oliver Tank. The sun started peeping through the grey skies, it was a lovely way to kick off our day. The crowd was loving the mellow, ambient electronica. A highlight for me was his sublime Snoop Dogg cover, “Drop it Like it’s Beautiful”. It’s such a cool take on a classic track, the crowd loved it, and it sounded perfect outdoors.

I ran all the way to the second stage (it was on the opposite side of the festival) to see Kirin J Callinan, but I have to say that I was disappointed. I’m a big Kirin fan. I love his bellowing Nick Cave-y voice, his experimental style, the androgynous look, all of it. Sadly it just didn’t work too well. His voice is so rich and deep and full, at first it sounded beautiful. Soon though, the acoustics took over. You couldn’t hear anything else. The next song was much heavier, with crazy distortion and double pedals. It just got way too intense and overbearing. I’m a metal fan, sure, but it has to sound right. Maybe I just wasn’t in the mood.

We ran back to the main stage, via some edibles. There was a variety of Sydney’s hippest food trucks there for our culinary pleasure, at pretty standard festival prices. Most food cost between 4 and 7 tokens (1 token = $2.50.) Beer was 3 and a half tokens, as a comparison. The food was far tastier than your average festival gruel, generally used to dilute alcohol intake rather than actual enjoyment. It showed us the variety and superb quality of Sydney’s food truck scene. The queues for food and drinks were very slim throughout the whole day, an impressive feat. It was only towards the end when most had shut down, that you had to wait ten or so minutes for a feed.

Next we saw World’s End Press. They have a great festival vibe and we really got into it. I loved how much the band was obviously loving it, too. And why wouldn’t you? Flailing about like madmen, all sorts of weird and wild dance moves, it was great. The synth, the heavy beats and the sunshine peeking through greying clouds made for an awesome set.

Sydney band The Preatures were up next. As they set up, the crowd suddenly quadrupled in size. They were leather clad, loud, raunchy and a whole lot of fun. Frontwoman Isabella Manfredi has this incredible, piercing voice which carried through the entire area. Manfredi treated us to a little anti-Abbott rant, garnering massive cheers. It’s very easy to see why this band has started receiving serious industry attention. The grooves were sublime, the guitars were wailing. Everybody should see this band!

Seekae came next and their brand of minimal, ambient electronica was so different to what we’d just been hearing. It worked really well. Starting off slowly and building up throughout the set, Seekae took us on an eclectic electric journey, with the setting sun as the perfect backdrop.

Needing a break from electronic before the Juggernauts-Hermitude-Presets triumvirate, we left Seekae a little early to catch the second half of the Laurels’ set. They’re one of my favourite Sydney bands and they did not disappoint. I love their lush psychedelia, complex, distorted and loud. Unfortunately, the acoustics still sucked. As soon as you got near the crowd, the drums were completely drowned out. Otherwise, the four-piece played a wicked set. It was a raucous jam with a messy, shoegaze drawl.

There were quite a few clashes, so I missed some acts that I wanted to see. I heard that veterans Decoder Ring still know how to work a crowd, and that Sarah Blasko did a beautiful job of captivating the audience with nothing more than her voice and a piano. The secret act was Cloud Control, which is awesome, but I skipped as I’m seeing them later this week.

Midnight Juggernauts were fucking good. I was never hugely into them, but their set was so, so good. We were dancing the whole time, the whole crowd was. They were a late addition to lineup, and obviously a greatly appreciated one.

Hermitude were insane too. Their rendition of “In the Jungle” was one of my favourite moments of the whole day. The entire crowd seemed to suddenly revert back to childhood, hug and sing along. They really know how to keep us on our toes, mixing and spinning and scratching like there’s no tomorrow. Every breakdown had a breakdown! Probably the most solid set of the day.  I’m really looking forward to seeing again at other upcoming festivals.

The Presets ended the day with a bang. The short breaks between acts was great, it gave us enough time to run to the toilets, rest our legs for a minute, chat to our neighbours. They came on and let it rip. Each track was flawlessly mixed and the well-known singles like “Ghost” and “My People” achieved the best crowd singalongs of the festival. Some great tidbits of banter, too. My favourite line from the day was, “When Howard was Prime Minister, the parties were way better.” Sweet double entendre! The Presets know what they’re doing, and they know how to close a night.

overall, one of the best festivals in Sydney. The crowd seemed harmless and free of the singlet-wearing, chaos-causing idiots that we deal with at bigger festivals. The police presence was hardly felt and I didn’t notice any serious trouble anywhere. The sound was mostly great, the food was delicious, the music was amazing.

FBi, an outstanding day. Thank you and happy birthday!