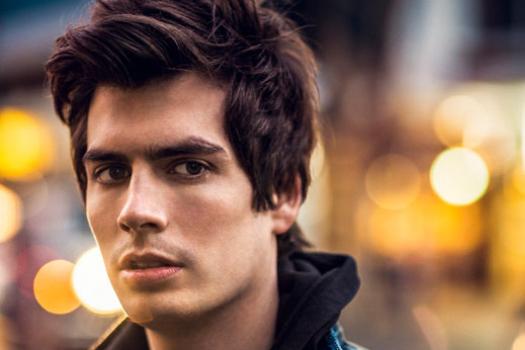 Sydneysider Guineafowl, aka Sam Yeldham made waves in 2011 with his EP ‘Hello Anxiety.’ He’s returned with the much-anticipated new record ‘I Hope My City Loves Me Still.’ We chatted to Sam about the new EP, working with Paul Mac, and the interesting things you see on late night walks through the city.

Hey, Sam. Thanks for talking to us. Your EP comes out on October 11. What should we expect from it?

I think what I try and do, or what just comes out, is music that’s movable. You’re meant to move and dance to it, but it’s still indie rock, it’s still loaded with feelings. I guess that’s the balance isn’t it? Something that’s moving and uplifting, but at the same time, hopefully in someway a little bit poetic  and a little thought about. It’s a few more words than ‘baby baby baby’.

You’ve said that you gained inspiration for this EP by walking pretty aimlessly around the city?

Haha, when you say it like that I sound like an absolute mental case. There was a period in my life where I was going through some stuff, and I literally couldn’t go to sleep without going for a really big walk to try and settle my brain. As a result of being out there where you’re thinking about something or someone a lot, the city became wrapped up in those thoughts. As I walked through the city I felt like I was closer to the things I was missing or losing, than if I was at home by myself. It’s a weird phenomenon.

Did you come across anything really amazing or crazy in your walks?

Lots of drunk people, lots of people crying. If you walk anywhere on a Friday or Saturday night, and all you’re doing is walking, not going somewhere, you’re really aware of everything around you. Walk around the city or Darlinghurst on a Saturday night and you’ll see at least 12 people crying. It’s really fucking hard to not stop. A lot of the time because I wasn’t feeling good myself, I’d stop and say “are you okay?” But you often look creepy, especially if it’s a young woman crying and you’re a guy wearing sneakers at night. It definitely looked creepy… It was an interesting thing as I was so down on myself, but I got this feeling that we’re all kind of going through it.

And it all provided inspiration for your music?

You’ve got a band that you perform with but you do the writing and recording yourself?

I’ve had a band that I’ve been really lucky to play with for a long time. They know the songs, so they’ve come in and lay down some parts. But I’ve written it all and structured it all, pretty much every part. I’m very bossy and dictatorial, it must be very unpleasant to work with me. I was in the studio for a very long time with myself and JP (Producer Jean-Paul Fung)  and that’s how I like it.

So your songs are really personal and you like being in control –would it be difficult to share that process with someone else?

Well I wrote a song with Paul Mac on this EP, ‘Heartbreak High’. It’s definitely the poppiest song. We spent a day fleshing out the music and then he just gives me a pad and says, “go write words.” I sat there for a while and then said “Look, I gotta go and do this somewhere else, I can’t do this here,” and a couple days later I sent him the lyrics. I guess that was different to writing with someone else , as Paul is much more experienced than I am. Basically, I wasn’t bossing him around. He was very much in control of what was going on, and that was a great experience. I think I need that – I need to be in control, or someone else to be in control. I’m not very good at collaborating in the middle.

I love Paul Mac, The Dissociatives’ record is one of my favourite Australian records. It was just great, I knew I’d get something great out of being with him for a while. The challenge came when he said to me, “go and write words.” Like, now is the time to write, as opposed to when I’m ready to.

You’re launching the EP at Club 77 on October 10th, tell us a bit about that?

It’s gonna be a really fun night, we’ve got some great other acts playing, local Sydney acts. Club 77 is a really good venue. The energy, it’s a great party. It’s kinda fallen off the radar as a live music venue, but I know Cloud Control did a sneaky media launch there, and I guess that’s the place to go.

What are some local artists you’ve been listening to?

I’ve been listening to Kirin J Callinan quite a bit, I’m such a fan. I really liked the Mercy Arms when they were in existence. Glass Towers too, it’s very upbeat and catchy. Cloud Control as well, their new stuff is really good. I’m pretty Sydney-centric, haha.

Going beyond Sydney, has anything else in particular influenced your sound or style?

Hmm, I don’t know. Such a hard question. I think people influence you and you don’t mean to have them influence you, and then when you try to be influenced by something, it sounds nothing like it. I listen to a lot of music from bygone eras. I was listening to a lot of motown when I was writing this EP. There’s alot of motown breakup stuff, I love how direct it is about being heartbroken.

What’s on the cards for the rest of the year?

Well we’ll see where the EP takes us, and make some moves after that.  There’s more music written, it won’t be another two years before the next stuff comes out.

The new EP is called I Hope My City Loves Me Still. Why wouldn’t it still love you?

Many reasons. I haven’t embraced it in a long time. The city and I have a bit of catching up to do.

Is it a love/hate relationship?

No hate, I’m always trying to impress the city.

‘I Hope My City Loves Me Still’ comes out on October 11. Head along the album launch at Club 77 on October 10. Support by Iluka and Tim Fitz. Tickets are $15, get your tickets here.