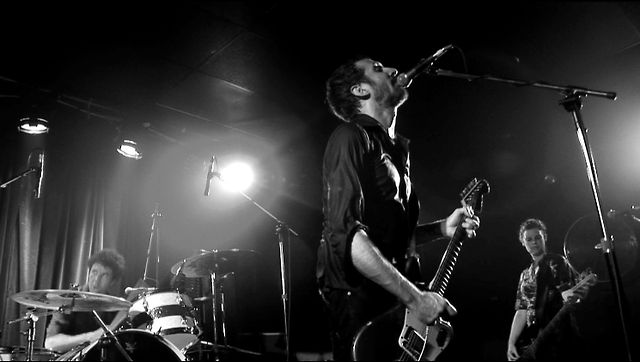 The Drones are the steadiest ship in Australian rock. With six stellar LPs under their belt and more critical acclaim than any other Aussie band in recent memory, the Perth mob has built a legion of fanatic followers, plenty of whom carried the great torch of Drones fandom to the Brisbane Hi-fi.

And weren’t they in for a treat. After 16 years of gigging, The Drones know their audience and their audience knows them. There are no attempts to convert new listeners, no bombastic theatrics or uneasy banter, just exactly what the punters came for – the most cathartic, raw, emotional rock show this side of 1979.

The five-piece opens with ‘I See Seaweed’, their latest album’s titular track. It’s a dramatic affair – discordant keyboard and guitar lines slip over each other uneasily as Gareth Liddiard (song-writer/singer/frontman) narrates his nightmarish, dystopian vision of the future. The song is a masterpiece of tension and release. The mood is thick enough to cut with a knife when the band finally relents and slams into the chorus with a howl and vicious guitar riff. It’s enough to make your hair stand on end.

Next off the rank is ‘How to See Through Fog’, putting Steve Hesketh’s keyboard front and centre. Hesketh might look like Louie C.K., but his addition to the band for I See Seaweed has worked wonders, lessening their reliance on blues scale standards and adding a whole other level of atmospherics.

Things take a turn for the wild when the band kicks in to ‘Minotaur’ and ‘Baby2’, two short sharp numbers which showcase the band at their ferocious best. Liddiard doesn’t play his guitar as much as his guitar plays him, he grapples it like a live anaconda and lets it drag him around the stage. By this point the few Drones virgins in the audience have realised they’re in for the show of a lifetime and hot blood is pumping through the mosh in front of stage.

By the time opening riff of ‘Shark Fin Blues’ hits the audience, things are in a state of pandemonium. ‘Locust’ and ‘Nine Eyes’ have torn emotional shreds off the crowd and all have succumbed to the gritty catharsis being unleashed from the stage. ‘Shark Fin Blues’ is a full frontal assault – visceral lyrics about a sailor sinking into shark infested waters, over a four chord guitar progression that oscillates between a brooding meander and then howling intensity. Seeing this epic of manic self destruction and isolation played out in the flesh makes it hard to disagree with the 70 songwriters who voted ‘Shark Fin Blues’ the greatest Australian song ever written.

Three more numbers round out the set before the band heads off stage – ‘Laika’ (about the first animal in space, a stray dog sent up from Russia), ‘I Don’t ever Want to Change (a ripper of an up-tempo rocker from 2006’s Gala Mill) and ‘Downbound Train’ (a Chuck Berry cover given a rough and ready makeover by The Drones). The cover in particular has the crowd in fits, a blues classic turned into an unhinged nine-minute epic, speeding faster and faster like the titular train about to go off the tracks.

The band is joined by openers Harmony for the encore, with the three girls providing backing vocals on the slow burning epic ‘Why Write A Letter That You’ll Never Send’ while Liddiard rips out devastating lines like “who cares about the Vatican/ man everybody knows/ and who’s surprised they went and/ chose a Nazi for a pope?” Sensational.

The set closer is another cover, this time Leonard Cohen’s ‘Diamonds in the Mine’. It’s a menagerie of musicians onstage with the Harmony girls sticking around as well as what looks like the entire touring party and assorted mates. After a night of pretty grim thematic material, Liddiard looks positively chirpy singing Cohen’s bleak meditation on the emptiness of life over a gloriously peppy tune.

And then it’s over. The crowd files out of the Hi-fi buzzed out of their minds but mentally drained. Drones songs require total commitment from the listener, and in return give a totally absorbing experience. A Drones show is like no other. It’s gripping, manic, raw music that picks you up and throws you around. It’s all the things that live music should be. This is the best live band in Australia, perhaps the best band full stop. If you haven’t had the opportunity to hear The Drones do their thing, do it before you die.