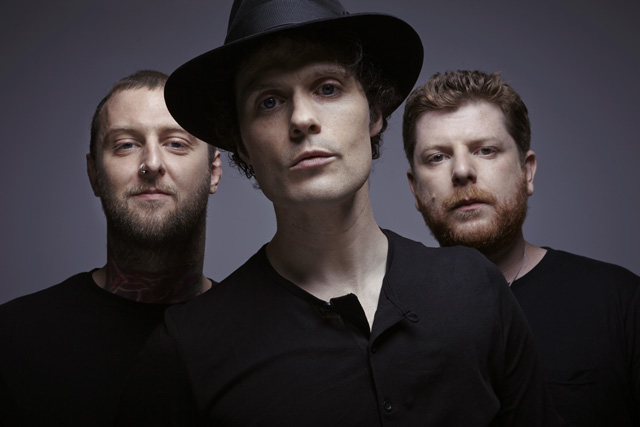 Glasgow 3-piece The Fratellis have reformed after a five year break. Following a string of shows throughout Europe, their exceptional third album We Need Medicine comes out this week. We chatted to lead singer and songwriter Jon Fratelli about the simplicity rock ‘n roll, the bravery of Bukowski, and remembering that at the end of the day, you play music because you just wanna play music.

So we’re here to speak about We Need Medicine. It’s out already in some other countries but it comes out here on the 11th.

I had no idea it was even out here.

Haha, well it comes out in a couple days here. It’s a bit more rock ‘n roll, a little bluesier, and it sounds a bit more personal and autobiographical. Were there any conscious changes to your writing style?

I don’t know, I guess time brings on any changes. It’s just impossible not to change over time. In some sort of way that sound was always that always there, I guess it was just impossibly hidden. Like when it comes to, um, I hate that word influences, but it’s only real word I can think of. When it comes to that, my influences haven’t changed since I was 15 or 16 really. It’s pretty much been constant, so it’s not like all of a sudden there’s something new that’s’ been listened to and it affects the songs that you write. Whether it’s autobiographical? I guess there’s one or two songs in there that are. I wouldn’t wanna sell an entire record with that sort of thing. I wouldn’t wanna listen to somebody else’s bleeding heart. There’s one or two in there, but that’s just because there has to be I guess, there has to be some point where you stop telling lies and tell the truth for once. I wouldn’t wanna tell the truth too much, though.

Haha, keep some skeletons in your closet.

Yeah, there’re lots of them.

Well that lead onto my next question; You’ve said that the first track ‘Halloween Blues’ is a nod to early rock ‘n roll. You can really  hear that raucousness, that rock’n roll simplicity. By the way, that sax solo in the first track in fucking awesome, I have to say.

I wish I could take the credit for that…

In terms of that old rock ‘n roll sound, who have been your biggest influences?

I guess I just go back to that mid ‘50s thing, when blues was turning into rock n roll. I go back to that a lot. I go back to early pop songs from that time, too. Being specific about it, just anything from Sun Records at that time, that golden period of Sun records was just great. Whether its Elvis or Jerry Lee Lewis or Johnny Cash , there’s something about the simplicity of all that. I tend to go back and listen just to remind myself that it is as straightforward as that, hat it really can be as simple as that. Whenever I’m overcomplicating  things,  that’s my starting point, to go back to that. I need to know that it existed.

Absolutely. You don’t need countless layers and sounds to get a great song.

They really didn’t. Even just recording, they had four microphones. ‘How do we turn something up?’ ‘We move the microphone closer .’ I just love that that existed, and when I put those records on , they still sound really alive to me. It’s just nice to be reminded that it t was true, it wasn’t some kind of myth.

Besides music, I know you’re also a big fan of writers like Charles Bukowski, Allen Ginsberg and the other beats. Does that style of writing affect your lyrics and stories at all?

Well I guess it must, in some ways. Not in any conscious way. Ginsberg, definitely. He’d probably be the only beat I’ve really liked. I know you’re meant to like Kerouac..

I have to agree, Ginsberg’s my favourite beat.

Haha, I used to be able to recite Howl. But more Bukowski than anybody else for me. I sort of read him on a continuous cycle, I’ll never be finished.

Yeah. It’s a world of its own. I remember when I first read Post Office, Women and Factotum. It really does something to you.

It does. Women could probably have been called men, it almost shines a light on the inadequacies of men more than anything else. I’ve never read anybody who’s more brave. There’s so much bravery in writing down the darkest thoughts in your head, that most of us keep hidden away because we’d be terrified to let anybody else hear them. But he put them down on paper for people to read.

There’s so much rawness and honesty there.

Exactly. And you don’t get that bravery often.

Anyway, we should talk a bit more about We Need Medicine. What medicine you need exactly?

Well, there would’ve been a point where I would have taken anything, haha. Anything and everything. But you know what? I still have no idea if that title has any real meaning, other than that it comes from a lyrics in the title song which says ‘we need medicine to get us to the end of time.’ I think it makes more sense when it has that line on it. Really, it’s sort of poking fun at the absurdity of life I guess. Life is absurd and I like how absurd it is. I revel in that absurdity.  But yeah, there was definitely a time when I would have taken any medicine you threw at me.

You said that it only took three weeks to record the album, was that process different to the first two?

We really did only spend three weeks in the studio and for us, that’s probably enough, for what it is that we’re trying to get across. We don’t go in and write and work things out. They’re all worked out and they’re all written. We really just have to transfer some energy from us onto the tape, and you don’t do that by doing endless takes, well, we certainly don’t. We did our first record in four weeks all in. It was probably two weeks of thinking and two weeks of playing, so it’s fairly normal for us.

You’ve said that you found it really funny that when The Fratellis split up, the media only wanted to refer to it as a hiatus, not the end. – hahaha, yeah – Did you really think it was the end, that there wouldn’t be another album or any more shows?

Yeah I did, and I didn’t really think it was that big a deal. It was just music. But at that point, I thought at that time that we didn’t really know how to live with each other and I couldn’t see how that would change. But it’s nice to be wrong about that sort of thing. Anybody who spends that amount of time together, it’s going to be tense sometimes. My reaction was to run in the opposite direction, but I’m okay with it. I’m not bothered, it needed to be done at the time, but I’m happy that we’re playing again. I’m happy that we can just go out and play to people.

Yeah, well I’d really forgotten that, but it’s all we ever wanted – to have people to play to. At the end of the day, you’re a show off, you need somebody to show off to. You can make records until you die, but that’s not showing off. You don’t get an instant reaction to that, but you do on stage. It’s nice to be able to do that.

When you first got back together, did it feel like a struggle, or like it was the right time and the right place?

Well the actual mechanics of it were ridiculously simple. It was a question one day from me: ‘does anybody want to play?’ and I got two yes’, haha. The only slight difficulty that came later was when we played some shows and then we were gonna make a record, and there was a short time of trying to work out, Jesus, what the hell are we?  We made our first record 7 years ago. It’s impossible to try and get back to there, and I wouldn’t have wanted to. It took a little bit of working out at that time, you kind of forget what it is that you do. But once that got figured out, it was easy.

You’ve already played some great festivals this year, and you’ve got your US tour coming up.

Yeah, we’ve done a year pretty much, a year’s worth of playing. It’s just been nice to rediscover that simplicity I was talking about. If all else fails – like we have so little control over everything except plugging in a guitar.  It’s the thing that keeps me sleeping soundly now. If all else fails, we still know how to do that.

Okay, well we’re out of time, so one more question. Will you be visiting  Australia any time soon?

We’d be desperate to. We’re in that mode right now of being a band-for-hire. We go where we can go and where people want to see us play. The second time we were there, we underperformed I think, we were in the process of having had enough at that point, so it’ll be nice to put that right.

We Need Medicine comes out on October 11 in Australia.