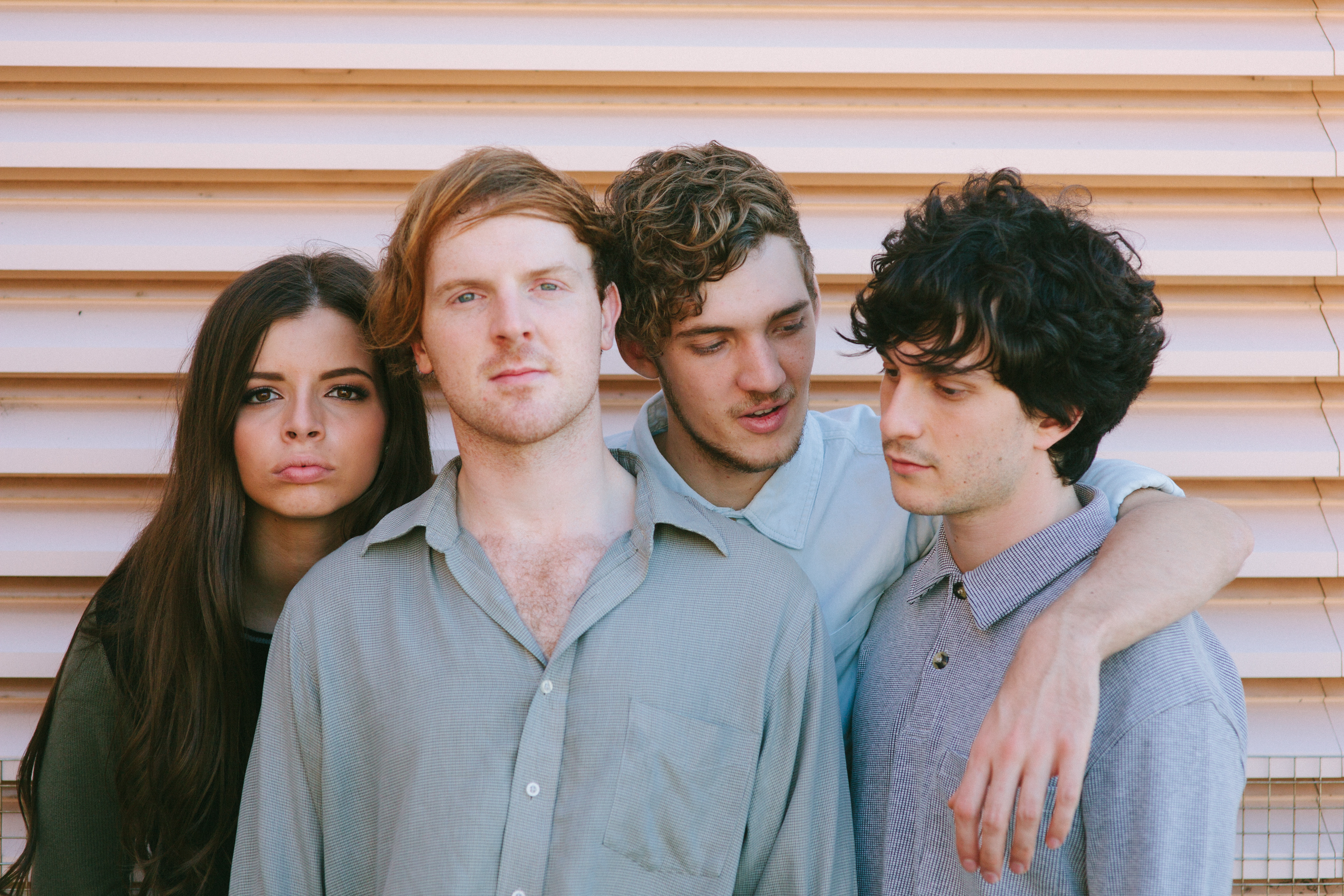 The Jungle Giants and I have a love/hate relationship. As in I love them, and they may or may not have a restraining order against me. I only have the vaguest ideas why, but it could be because the last time I caught these guys live was at this year’s BIGSOUND Festival, where I might just have sexually harassed Sam Hales a teensy little bit. Yeah I know right, it’s cute when a female fan offers to be the mother of your children and kisses you on your well cultivated stubble, but as soon as I do it, it’s a line too far. This is what people are referring to when they talk about sexism in the music industry.

The Jungle Giants, coming off the back off their first LP, Learn to Exist, finished up the album tour with Melbourners Northeast Party House on the weekend. Local group The Creases also turned out to The Hi-Fi as the opening support act Saturday night. They play a charming, if a little uninspiring, brand of indie rock and while it’s not bad, it doesn’t do a whole lot to stand apart in a pretty heavily saturated genre.  The Creases have a fairly small following, and it’s to be expected that their live set lacked some of the quality and professionalism of the two other acts. But I can see them coming good in the future. Very cool, check them out. The Creases also recently signed with UK Label, Rough Trade Records. So they’ll be joining the ranks of bands like The Smiths, The Strokes, The Libertines, etc. that came before. No biggy.

Ok. Northeast Party House. Wow. If you haven’t heard them, they’re an alternative/dance rock six piece out of Victoria. They’re in a similar vein to Does it Offend You, Yeah?. Now this next bit is a huge call, but it was probably the best supporting set I’ve seen all year. And yes, that includes The Jungle Giants themselves when they supported Two Door in January, a performance I raved about. They boast some truly impressive electronica, wicked guitar, and what are some of the most interesting and enjoyable vocals in new Australian music. The band’s singer, Zach, sings with an accent that sounds almost British, and reminds me of Bloc Party’s Kele Okereke. I’m aware that all of this makes for a pretty big wrap for what was only the supporting band, I know. But believe me, these guys put on a near faultless performance. For a band still trying to reach mainstream popularity, their live set was extremely polished and exceeded all expectations. The audience was extremely receptive, and I mean, why not? It was Saturday night and they were on the receiving end of some killer tunes. I wish all crowds were as good as the other night’s. Northeast Party House built momentum throughout the set and highlights were “Pascal Cavalier” and the anthem of a generation of dole bludging uni students, “Youth Allowance”.

Funnily enough, The Jungle Giants opened their set with the same song they did their album, “Come and Be Alone With Me”. But if anything, Northeast Party House were so amped and energetic, that the first song calmed the crowd down. It’s still an upbeat catchy pop tune in typical Jungle Giants style, but none the less, a change in pace from Northeast Party House’s dance tracks. It was received well and it was clear from the get go that this was going to be a stellar set. The second track of the night was “Mr. Polite”, from their debut EP released in 2011. At this point it’s fair to say the crowd went mental. It’s been two and half years since the song’s release and it remains a fan favourite. But in those two years, there is something that hasn’t remained constant. And that’s The Jungle Giants themselves.

We’ve seen them go from Triple J Unearthed to Hottest 100, from supporting Brisbane locals like Last Dinosaurs to international pop icons Two Door Cinema Club, from a small inexperienced indie band to this class act before us. Sam Hales has grown as a front man, Cesira gets involved in throwing chat with the boys, there are projections of fighter jets and light displays behind Keelan on the drumset, and Andy Dooris? Andy Dooris is still an absolute nutter. I mean the guy was stage diving from the second song onwards, for Christ’s sake. In front of a Brisbane home crowd, the whole band was on their game, but it was Andy, as always, who looked to be getting into it the most. If Sports Bet gave odds on how many times Andy Dooris will stand still during a performance, the smart money would be on zero. Yes, Zero times. He’s like the bass playing version of the squirrel from Over the Hedge. It’s not to his detriment, either; he’s one of my favourite performers to watch and between him and Sam they really keep a set from going stale. That and Cesira smashing glasses. I’m not sure if that was deliberate, but either way, very rock and roll of her. Which I guess would make her indie pop/rock’s female equivalent of Noel Gallagher, except, you know, good looking and not a twat. So really, nothing like Noel Gallagher at all.

Jokes aside, this is one of the biggest indicators of how much these guys have grown as live performers. Yes, the set flowed well and was of an excellent standard, but they were also damn enjoyable to watch. Sam’s been reading up on his copy of “Front Man Banter 101” and had a few cheeky laughs with the crowd. He also gave a touching shout out to his mum in the audience and at one point joined Dooris in stage diving. Though clearly not as practised as his fellow band member, it was touch and go for a moment as to whether or not he was going to make it past the security barriers. They also hauled up The Creases’ member Jarrod to play guitar at one point, though under the condition that he scull a schooner on stage, as enforced by Cesira. It was the small moments like this, in addition to great tunes, that really kept the crowd engaged.

As expected from an album tour, the set heavily featured tracks from Learn to Exist. When the set rounded to a close and “She’s a Riot” remained unplayed it was clear that the crowd was going to want an encore. Without too much delay, Sam returned and did a rendition of the stripped back “Devil’s in the Detail”, a song that is in contrast to the playful pop/rock the band normally produces. The raw guitar and vocals wouldn’t be out of place on something like a Bright Eyes album and it is all the more enjoyable because it stands out from The Jungle Giants’ other work. The rest of the band then joined him for “She’s a Riot” and I think playing the two songs, which are on the opposite ends of the spectrum in terms of energy, was a nice way to finish.

There were a lot of very happy punters at The Hi-Fi last Saturday night. The Creases made a good first impression on those of us who hadn’t seen them and Northeast Party House exceeded expectations. Sam Hales is also liable to be on the receiving end of some more of my sexual harassment if The Jungle Giants keep kicking this much ass.