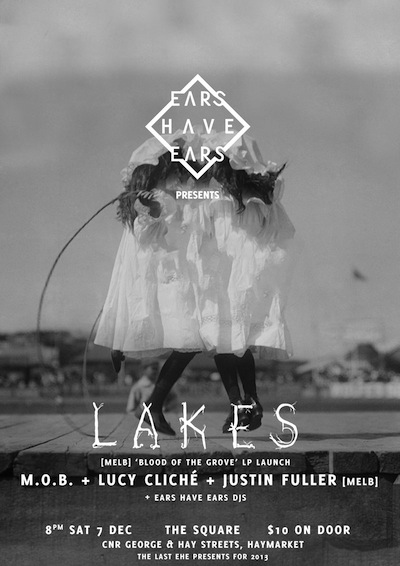 Do you like FBi Radio? Do you like experimental music? Do you like seeing obscure, unusual and interesting music right in front of your eyes and ears?

You know you do.

FBi’s weekly experimental music program Ears Have Ears have put on four live events in 2013, and they’ve got one more in store before the year comes to an end.
It’s not what you may think, though. In a step away from the ‘traditional notion’ of experimental music (which is a confusing concept, I know,) Ears Have Ears #5 will be a showcase of acts which orbit around Aussie rock, punk and electronic – but tweaked, subverted, and challenging what we think these genres may be.

Come down to The Square in Haymarket this Saturday Dec 7.

From our own city we’ll be seeing the loud and crazy pseudo-punk duo M.O.B, Lucy Cliche of NOTV, Half High and Knitted Abyss, and Melbournian electro-whiz Justin Fuller.

Sewing it all together will be sounds from Ears Have Ears DJs.

he best part is that it’s only TEN BUCKS. Yep, for the price of less than two drinks, you get a whole night of extraordinarily creative, intensely unique experimental music that’ll open your eyes and ears to sounds from the darkest, foggiest corners of the world of music.

Catch Ears Have Ears on FBi Radio 94.5 on Thursday nights from 9-11pm