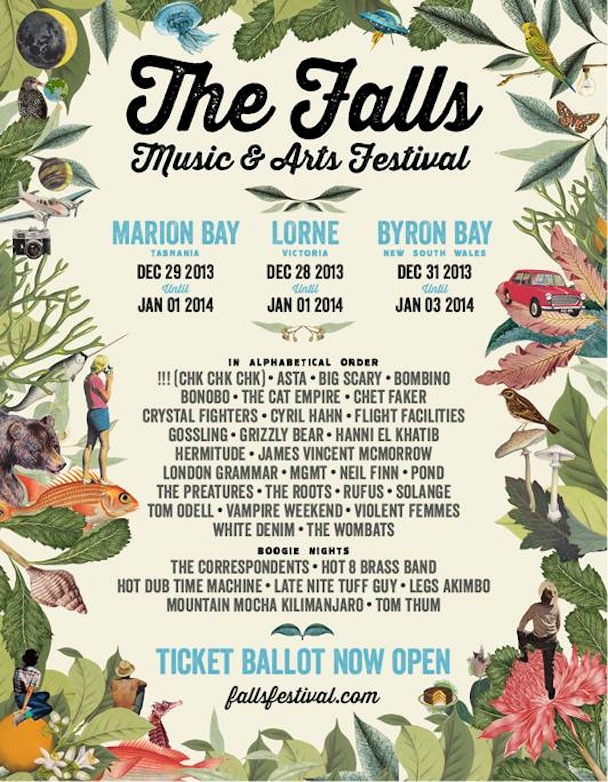 Raindrops and London Grammar and whiskey and dumplings, cinnamon-scented portaloos and 4 am campsite sing-alongs…. These are a few of my favourite things (from Falls Festival)

Falls Festival is a wonderful way to bring in the new year. The vibe is fantastic, the crowd is diverse, relaxed, and here to party . This year, one of the country’s favourite festivals branched out to Byron Bay, and I headed up with a group of friends for the week. There was an endless array of amazing music – almost every set I saw (and I saw a LOT) was fantastic.

North Byron Parklands (also home to Splendour in the Grass and Bluesfest) is a vast, beautiful, well-organised campsite. It was huge, and there was never a dull moment. The massive hills created incredible natural amphitheatres for the main stages. There were bars and smaller stages scattered throughout, and a wicked variety of food and market stalls. It was lovely waking up in a sun drenched field, with a sleepy sun and sleepier cows. The trees and lake surrounding  the main areas made for breathtaking backdrops, particularly during the sub-tropical sunset. And the stars, oh, the stars.

2. Falls Festival is actually eight festivals in one.

I’ve spoken to so many people who had an entirely different experience to me. There is such a wide variety of options and styles and stuff to do, so it caters to all. My days were full of amazing acts – rarely did more than two hours pass without seeing a wonderful set . The same goes for most people I spoke to, yet some had no overlaps at all. There was room for indie kids, hipsters, ravers… and it worked out perfectly, which is no mean feat.

The Roots were a great choice to bring in the New Year. But to be honest, I expected a better set. They played a near-identical set to what I saw at the Hordern Pavilion the previous week, and while that was incredible, it was exactly that – their own show. A headlining set at a festival on New Years Eve is a very different affair. Plus, years of playing as Jimmy Fallon’s back-up band has apparently transformed them into a cover band.

Anyway, it was boiling hot and I was in the middle of a crowd of thousands. Sweaty thousands. Sticky thousands. I was overheated. I’d run out of water. And then, the heavens opened. Rain! As someone with long, frizzy and thick hair, I’m never usually a fan of rain when I sans umbrella or hat. But that was one of the greatest moments of my life.

No matter where you walked, you were bound to hear music – and an overwhelming amount of it was good. The Jack Daniels Barrelhouse had some great music, as did the smaller stages and bars. The sound in there rocked, inside and out. We spent a lot of time sitting in the courtyard area, relaxing in the sun with drinks and sweet tunes. My favourite ‘new discovery’ was sister-duo Siskin River. Romping, stomping, country-tinged rock. They also played an incredible version of My Favourite Things (from the Sound of Music.) The venue was a cool change from the blistering outsides, it was small and intimate, but you didn’t feel too squashed.

One problem, however, was that the really tiny stages had no set times listed anywhere online, or on any programs that you could find in advance –annoying, because I heard so much cool stuff, but I have no idea who it was.

It’s hot as hell up in Byron Bay. You can’t sleep past the crack of dawn, because the inside of the tent becomes a sauna, and you wake up in a pool of sweat that no amount of baby wipes can fight. So, it’s fantastic when a festival arrange their set times so that my mornings were anticipated, not feared. January 1, midday. Blistering heat. Sleep-deprived, dehydrated, hungover. The cure? Ice-cold fresh coconut water – and Chet Faker.

Man, that guy played a great set. Those sensual, electronic, bluesy beats make my mornings better fairly often, and this was just what the doctor ordered. An excellent start to 2014. Similarly, Oliver Tank took the stage on the morning of the 2nd. The young Sydneysider gets better every time I see him. What a way to kick off the morning. Both men are more than welcome to come and serenade me daily as I make my pre-work coffee. It probably won’t be the same as lying in a field in Northern NSW, but still..

The food at Falls was amazing. We’d taken up some snacks – mostly a car full of Mi Goreng, in an effort to save money. But after two days of oily, MSG-laden noodles, we set out on the hunt for a decent meal. And boy, were we in for a treat. Going far and beyond what most festivals serve – similarly gloopy, MSG-laden food – every cuisine and dietary requirement was catered for. Whether it was venison sausages, cauliflower kofta balls from Sydney’s much-loved Govindas, Baby Burgers (“now with 10% more baby”) and even edamame beans that you wanted, Falls had it covered. By far, my favourite was a dumpling place which served a massive variety of seafood, meat and veg dumplings, gyoza and buns. Super fresh, super cheap and relatively healthy. We ate SO. MANY.

As is often the case, some of the best festival moments happened outside of the festival entirely. On New Years night, we retreated to our area once the music had finished. Not yet ready to sleep, we got some speakers and some smuggled-in booze out, and started a singalong. One of my friends has a love of making epic playlists, his current favourite being the ‘90s.

We were slowly approached by a couple members of the epic camp next to us, and we shortly joined their festivities. It didn’t take too many drinks until this group of macho twentysomethings were singing along with us to the likes of Weezer, Lighthouse Family and even S Club 7. Many drinks and spliffs later, we were still at it come 4 am. It was pretty magical walking to the toilets at the other end of our area, only to hear people in other campsites singing along to our music, over 100 metres away. It was the best possible way to bring in the new year. Old music, new friends, little sleep but big, big smiles.

I love Big Scary. I know they’ve been around for a little while but I only discovered them last year. They took the main stage on this incredibly beautiful, sunny afternoon and I dragged my friends along, most of whom didn’t know who they were. We lay in the sun drinking from super delicious (rum-infused) coconuts, and were treated to an absolutely wonderful set. Their rich, deep sound travelled so well, and the large crowd lapped up every moment. Definitely one of my favourite Australian bands right now.

Move over, Beyonce. You are not the only Knowles with serious talent. James Vincent McMorrow played a georgeous set, and I left early to catch Solange at the main stage. She can sing, she can shake, and man, she is sexy. Hair down to her waist, a mini-shift dress, moves to rival any big pop star. Despite the heat, she got the entire crowd up and dancing the whole time.  The music was outstanding and so groovy. She was LOVING it, and so were we.

London Grammar are the absolute darlings of the music world right now, and it comes as no surprise after hearing their phenomenal live show. It was one of the most anticipated sets of the festival, and the smaller or the two main stages was jam-packed. They did not disappoint. Every moment was mesmerising. Their music has such a great sound – minimal, but rich and full. And wow, what an incredible voice! It just resonated so beautifully. Wow, wow and wow.

Bonobo was another musical highlight of mine. Out in full swing with a complete live band, his music was so much fun to dance to on the big hill.  I saw him the following week at the Sydney opera House which too was amazing, but on that hill, in the sun, it was bliss. Vocal stylings from Szjerdene, outstanding drums and sax playing from Jack Baker and Mike Liserge, respectively, made for a phenomenal set. The minimal melodies, subtle rhythms and  There were old and new tracks, catering to the whole audience, who danced, clapped, whistled and loved every track.

Finally, and possibly most importantly, the toilets at Falls Festival were by FAR the cleanest portaloos I have ever had the sort-of-pleasure of experiencing at a festival. Ever. It seemed like they were being cleaned every hour, and they smelled like cinnamon. Seriously, they did.