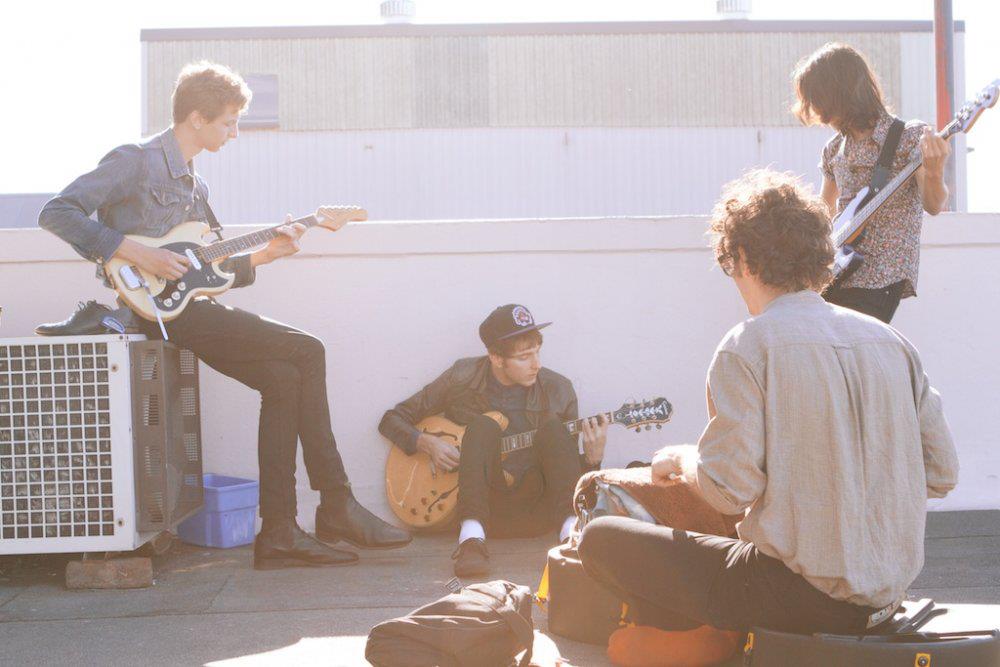 Last year was pretty full on for Jeremy Neale, soloist and lead singer of Velociraptor and Teen Sensation. 2013 saw him release his first solo EP and garner a Triple J Unearthed Artist of the Year nomination. 2014 is set to be just as big with tours alongside John Steele Singers and Loon Lake over the next month or so. Jeremy took some time out from his busy recording schedule to deliver us the 4-1-1 on music, basketball and alternate universes.

So Jeremy, we hear you’re in the middle of recording?

Yeah, not anything solo actually, but for another band I play for called Teen Sensations and also working a bit on the Velociraptor record too.

Cool, so we can expect some more Velociraptor to drop?

Yeah there’s a new album coming out July or July-ish and a new single in a couple weeks.

And tell us a bit about Teen Sensations?

It’s very much a Beach Boys. melodic, surf pop focussed ensemble. Probably not going to make waves in the music industry. Pardon the pun. It’s more for the revivalists crowd I think.

I really do enjoy it, I like all pop. But I think 60’s  stuff is very important to me. In the future I sort of hope to explore other realms of pop, but I’ll always have a band doing 60’s stuff, or at least solo I will.

You’ve got a tour coming up with John Steel Singers in a couple of weeks, can you tell us a little about that?

Yeah, I don’t know how it came about exactly, I mean we’re both managed by the same people. But the tour itself is two shows in each city. Two in Brisbane, two in Sydney, one of which is our first all ages show, so it’ll be cool to test the waters in that regard. And then also a double in Melbourne. It is the “Boys Gone Wild” tour, so the amount of wildness? Well that remains to be seen.

One thing though, in the lead up to this tour we took a bunch of sexy finance style photos for a calendar, but in an effort to cut costs we got them made in China and they still haven’t come back yet. Basically, if we don’t have any sexy “Boys Gone Wild” calendars in time for the tour, well I don’t even know what the point is.

Hahaha, you guys are also sharing the headline spot?

Yeah we’ll swap each night which is good.

Then shortly after you’re touring with Loon Lake?

Yep, yep, touring with Loon Lake which should be coool. Then after that I’m off to the UK.

Ok now, be honest. Who are you most keen to tour with, Loon Lake or JSS. We promise not to tell the other one.

Oh mate, I’m excited to tour with everyone, I love to make new friends.

You know, even though I live in Brisbane, and I hadn’t met the John Steel Singers before this whole thing got put together, we’ve been hanging out a lot lately. It’s good. And Loon Lake, I like their music and we’re touring soon but we’ve never properly met. Been in e-mail contact over the years several times but yeah, never got to meet in person. It’s life man, be in it.

You of course released your EP last year, In Stranger Times, and there were talks of a possible album, will that be happening this year?

I’m going to be putting out a new single towards the end of the year, probably October, but it remains to be seen whether I’m gonna do an album or another EP. But the music industry is changing and I have to look at what I like to do. Do I wanna do an album or do I wanna just do a couple singles, or maybe a time-stamp EP that is just a snapshot of what’s going at that particular time in music for me.

So I don’t really know, haha, I guess maybe I’ll write 12 good songs and then I’ll have an album, but I don’t want to put out an album with a bunch of filler. Quality over quantity. So we’ll see. BUT I guarantee you the single in October is probably the best thing I’ve ever written.

Back to Velociraptor, are there any plans to tour when the album or single drops?

Yep, we’ll be back on the road probably in April. We’ll do a run for the new single, but it won’t be too hectic a tour as we want to take it easy and focus on working on the album and doing it justice. Once it’s out we’ll do another run.

What’s it like touring and working with such a massive band. There’s twelve members, correct?

Technically fourteen. Three of the guys moved overseas so we had to get some new recruits.

It’s become more of a cult than a band now really.

Haha, yeah, if we weren’t always so hung over on Sundays we would field a full size soccer team. But touring is great, like when we did a tour supporting DZ Deathrays, which is funny because they’re in the band as well, we ended up booking up two ten person rooms in a Sydney hotel which was awesome. You’d walk out the back and there’d be three people sitting on milk crates smoking cigarettes. It was like being on the set of M.A.S.H. except you know, minus the warfare.

Haha, and what are your plans for the UK?

I’m doing the Great Escape Festival and hopefully organising a few other festival and support type things. I’ll be there for about three weeks.

Hopefully I’ll have developed a really thick English accent by the time I get back, which will be great because I’ll have some cultural leverage here. Is that how it works? Everyone will be like, “You’re so fancy now Jeremy, tell us your stories from this far away land.”

Haha, yeah I’ll probably start a style blog and I’ll know about cuisine and fashion. Because you know, no one has got the internet, so they can’t figure out what’s happening in other parts of the world for themselves, they need me. And I’ll come back with rare spices and make a tonne of money and build a castle

Haha speaking of the internet (great segue), you’re pretty vocal on your social media stuff, keeping in touch with fans and what not, what’s your philosophy on that?

Besides writing music, it’s probably my favourite thing about music I think. Haha, maintaining the Facebook page is quite a lot of fun. And I like talking to people and the position that we are in with music and the internet, there are no barriers between the artist and the fans. I think Twitter did a lot for that, anyone can just tweet at a major celebrity. I know I’ve tweeted William Shatner a dozen times, and although he has never replied… he will… one day.

He’s just coming up with a really good response.

He’s got like four whiteboards in his office and a team of people working on it. He’s written out a lot of possibilities and is trialling them out.

Haha, and a bin full of scrunched up paper.

Haha, and a lot of self hatred. But you know even if they haven’t replied, you know they’ve seen it, they’ve actually read something you’ve written. Therefore, you personally, have impacted a major celebrity’s life. You’ve taken up two seconds of their life and that has flow on consequences. We’re all subtly affecting celebrities lives and the world via social media, and that could have major, major consequences. It’s really a testament to how interactive the world is.

A lot of artists when they get bigger tend to cast that social media interaction aside and let their management take care of it. If you woke up tomorrow with a million people following you on Facebook, would you still find the time to handle that yourself?

Yeah, yeah, absolutely. It really blows my mind when you see social media run by an artist’s label or management. It’s like (robotic voice) “This is a gig we are playing. Also download the album on iTunes,” and it kind of reads as, “money, money, money, money.” I think that kind of takes the art away from the artist. How do you feel about it?

Yeah definitely. I think it’s great to see another aspect of an artist or band and it’s easy feel disconnected when they shove the responsibility onto someone else. I’m a big follower of you in particular on Facebook because you are so interactive with your fans. People will comment and you make the time to reply. That, and you’re hilarious.

I guess there’s two ways about it. I prefer to be open and interactive because I think that’s the only way people will get to know me and I think that helps with them finding something real in my work. On the other hand, some people prefer to remain unknown and I guess they feel as if being mysterious is more intriguing.

I took a few years off because I injured myself. Not by playing basketball, but drunkenly jumping off of a wheelie bin. But I’m playing again this season for a team called the “Rainbros”.

Rainbros, like rainbow but bros. And because we always make it rain on the court.

If you had to get a basketball team together to save Earth from aliens, ala Space Jam, who would be on that team?

I’d wanna make a bold statement to the aliens. I think in that situation the most bold statement you could do is not even pick five people. Just pick yourself and one other person. And that’s like saying, “Hey, I only need two people to beat you,” and that kind of shows off  your bravado and confidence. Sometimes that can be enough to instil fear in your enemy.

So if I can only pick one person then it’s gotta be all buddy-cop-esque, but I don’t want Chris Tucker, so it’s gotta be… (long pause) Actually screw it, you know what man, you take the man of the hour, Nathan Fielder, the president of Dumb Starbucks.

Oh man, asking the tough questions. And all the times they co-exist, like when you’re in space but it’s all medieval and you’re fighting with maces. I can’t pick both?

Oh shit this is hard. Ummm, you know what, sci-fi.

Good man. Fantasy is for nerds and squares.

But do you know why sci-fi?

Well yeah that too, but this is the thing about science-fiction. Because sci-fi deals with space and deals with the universe, and the idea of infinite universes and infinite possibilities, it means that somewhere out there, there’s gonna be a fantasy world. So you have all your fantasy dreams happening but in a sci-fi context.

Yep that the thing about the universe, I’ve got the whole thing in my head.