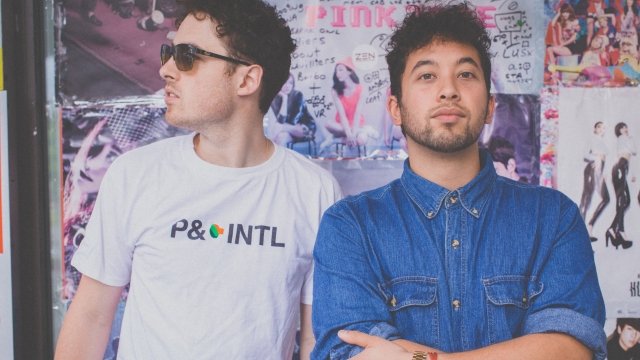 Aussie hip hop is finally making a name for itself, and it’s getting bigger and better everyday. Jackie Onassis is the name of rappers Kai and Raph, who hail from Sydney’s inner west, and are in a crew with Spit Syndicate, Horrorshow and Joyride. Signed to Sony, international touring and two EPs under their belt in less than 18 months, there’s no stopping these boys. We had a chat with them about Aussie hip hop, influences, playlists and Jay-Z.

Your second EP, Juliette, has just come out. I read in another interview that you said it was a bit more complex than your first one. Was that a conscious decision or just sort of a growth in your musical style?

Raph: I think it just happened. I mean, this is our second EP so it was kinda like, just trying new shit..
Kai: Just seeing another side of what we can do.

Definitely. I mean it’s been pretty crazy for you guys – in less than 2 years you’ve had two EPs, signed by Sony , touring overseas… What has that been like?

Kai: it’s sorta unexpected, more than anything else. This is our first time doing it seriously, so there’s nothing to compare it to, just as far as we’re aware. We’re aware of how lucky we are, we’re so happy with how it’s going.

Raph: But we haven’ t made an album yet, so that’s what we’re focused on now.

Have you got an album in the works?

Raph: Yeah, we’re always making music. That’s something we’re  really about and hungry for, at least at this stage cos it’s all so new. We’ve always been working towards the album.

Kai: We’ve just got so many songs and verses that are just waiting to come together , and become an album.

Doing all that so quickly, it’s pretty rare in the Aussie hip hop scene.

Kai: Yeah, I guess so. I think [Australian hip hop] is changing recently, but if you look at all the classically big Australian artists, they’ve all released three, four or five albums before they get known. The ones up there now like Drapht, Bliss n Eso, Hilltop Hoods, even our friends Spit Syndicate and Horroshow both released three albums each. But then you’ve got the younger guys like Remi and Allday, and us, who all of us haven’t released an album yet. And I guess the bridging example would be Seth Sentry who only released one album.

Raph: Yeah there you go! The times, they are a changin’..

What do you think has led to that change? Or what sets you and Seth Sentry apart?

R: I don’t know, I don’t think it’s setting apart. I think the sound has changed a bit.

K: But also, the other artists did the groundwork for us.

K: Like those guys who have released three, four, five albums kind of set that groundwork.

As a scene, Aussie hip hop is really, only very recently getting taken seriously.

K: Absolutely. But even then, there’s still people who won’t take it seriously and listen to it.

Do you think the Australian scene can join the ranks of American hip hop?

K: Well in the sense of being able to talk about gangsta stuff and real epic stuff like that, definitely not.

R: With quality you can.

R: There’s no reason why not, with the quality of a production or as a songwriter.

K: I don’t think it’s ever gonna be like an action movie, the way like gangsta rap is, but yeah like Raph said, there’s nothing to say that there is a limit to what you can do, or how good you can make your music.

R: Definitely. I think that if the music is of good enough quality, then you know, people are forced to appreciate it in a way. And maybe Australian hip hop as a genre isn’t there yet. Well, it isn’t. I don’t think so anyway, I don’t think it is on that level with the stuff that’s coming out of America that’s been around for way longer. But there’s no reason why it couldn’t.

Well it’s come so far, even in the last five years.

K: It’s a kinda reciprocal thing, y’know? Like when you’re in this isolated little enclave and everyone hates your genre, you make music differently to when people are really receptive to it.

R: I think people are also gradually just getting more and more exposed to it. I know people who, when they first heard Hilltop Hoods when they were blowing up, would hate it. But now they’d run to the sore the second  a Hood record drops. It’s just that they’re exposed to it now. The music never changed.

As a genre it’s also getting a whole lot of radio play now, and festival crowds are a lot more open to it as well.

So who are your biggest influences?

K: I pretty much listen to Jay-Z every day. You might not be able to hear that in the music but I swear to god, if you wanna know anything about rap, you gotta listen to Jay-Z.

He puts on a great show. I saw him in Brooklyn a couple years ago.

R: Seriously? I’m so jealous of you right now. I’ve had the opportunity to see him for free and I passed up on it, I don’t know what the hell I was thinking

K: You got to see him in Brooklyn?

Yeah, at the Barclays Centre. He played seven shows in a row (after purchasing the entire stadium) and I went to the last one. Beyoncé came out and sang too.

R: Jay-Z is my favourite as well. But at the moment, from producers as well, I’ve always liked Just Blaze and T-Minus who does a bunch of stuff with Drake. He’s also done other stuff with 2 Chainz and Kendrick.  I really like his sound. Also outside of hip hop I love the stuff that Cashmere Cat is doing, and Hudson Mohawke. It’s always showing you how you can use new and interesting sounds

K: Did you see Hudson Mohawke blowing up on Twitter about not being on the Jigga record?

R: Yeah, apparently he gave Jay-Z like six beats for Magna Carta [Holy Grail] and he didn’ t use any of them

What did you think of that album?

I dunno.. I really liked Blueprint 3 though.

R: Yeah I liked that as well, it’s underrated

I think with Magna Carta, I was pissed off with the whole Samsung advertising thing. I mean, the album was basically released as a marketing campaign, giving away copies to Galaxy users etc

So what have you got planned for the rest of the year?

K: Well we’re about to go on tour with Illy, on the Cinematic tour, and we’ll be touring Juliette. It’s all capital cities so that’ll be really fun. We’ve been on tour with him before – and the man knows how to turn up! And so do we. So we’re just gonna do it.

With the writing process for Juliette any different to the first one?

R: Like I said earlier we’re kind of making music all the time, and we don’t really have a set process, we’re not the kind of group that locks ourselves away for two weeks and writes a whole EP or anything. Usually the process is like, I make bare bones of a beat and send it to Kai and he either likes it or doesn’t like it, and he might record a demo verse or chorus or whatever , and he sends it back to me. And we’ll go back and forth, maybe sit down together and workshop the whole song. But on this record we also had a couple tracks like Special Occasion, where the lyrics were written before the beat.

Do you often write the lyrics first?

K: Well I like to write to a specific beat, but in this instance I had verses written to other rappers’  beats, and we built that around it, which is cool, and probably not something we’ll get to explore again.

Is that something you did growing up? Freestyling over other beats, and then learning how to make your own?

K: Yeah definitely. Before I linked up with Raph I used to make my own beats, but they just weren’t that good. But I’ve got folders of other rappers’ instrumentals and stuff.

R: We used to sit around and freestyle over 50 Cent instrumentals

What other music are you listening to in general?

K: I listen to a lot of playlists on YouTube and Spotify that other people update. As a producer I like to keep my ear to a lot of the stuff going on in the electronic scene too, as they’re always doing interesting stuff. But playlists man, they’re the future.

Any artists in particular?

K: I guess the one that instantly springs to mind is Cashmere Cat. I saw it on Friday night at Goodgod and itwas really really fun. He’s really pushing the production side of things really hard.

R: We were both recommended Earl Sweatshirt yesterday too.

K: I hadn’t really listened to much Odd Future stuff besides Frank Ocean and Tyler, so I really wanna check him out.

K: We never really got too into Odd Future, but it’s cool that they’re a bunch of guys doing they’re own thing. I can identify with that philosophy in the sense that we’re in a crew with Horroshow and Spit Syndicate and Joyride. I’m not saying that we’re Australia’s Odd Future…! I like the idea of doing stuff together. We all grew up together, we were 12 or 13 when we first met them and we’ve just kept doing music together and going on tours and all that.