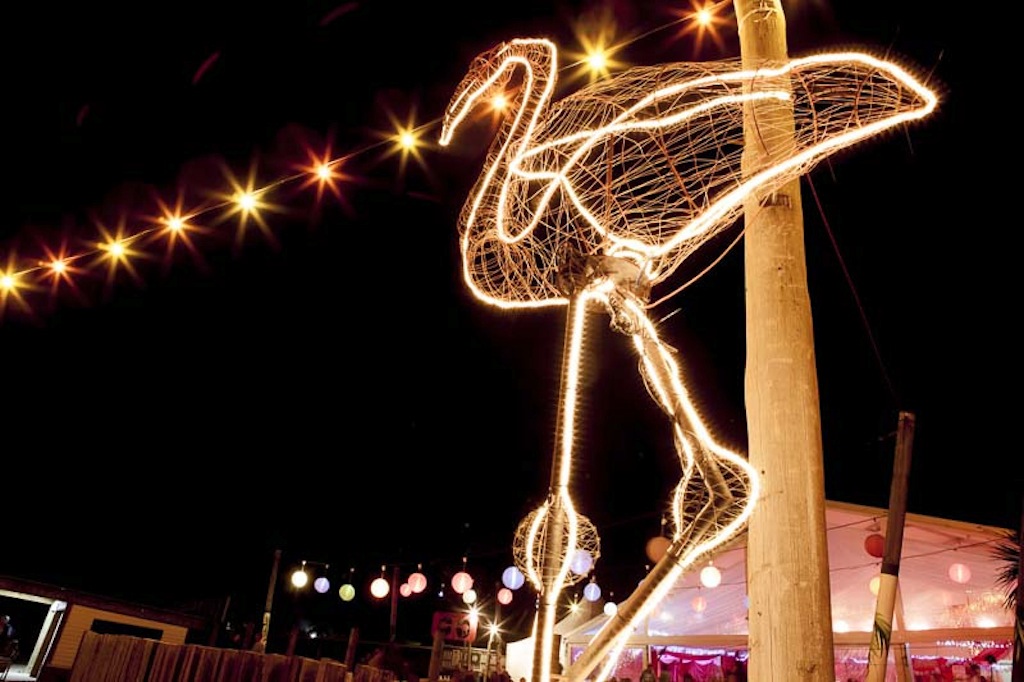 This was my first foray into the world of Aunty Meredith’s festivals, and it’s safe to say it will not be my last. I can completely understand why this is an annual pilgrimage for many. The people, the land, the downright quirkiness of it all made for a near-perfect weekend of music, sunshine and all-around good vibes.

1. The campsite and The ‘Sup: So beautiful, and surprisingly easy to navigate

The Meredith Supernatural Ampitheatre is a breathtaking site for a festival. It really is. The camping areas were fantastic. Trees surrounded us, so the sun glimmered through the leaves, but we weren’t abruptly awoken at the crack of dawn, only to find ourselves in a self-generated sauna. The amphitheatre was lovely too, especially at sunset and beyond. Tiny coloured lightbulbs lit the arena beautifully. The weather was amazing, too. It was super hot during the day (only problematic when you couldn’t find any shade to sit in) and cold enough at night that it wasn’t stifling inside the tent. Also it didn’t rain! 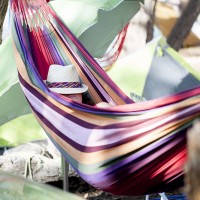 The vibe was just too amazing. The infamous ‘no dickheads’ policy seems to work brilliantly because there really were no dickheads. (I think it’s also fabulously convenient that the Melbourne leg of Future Music Festival was on that same weekend…) People were friendly, people were relaxed. There was no tension, no anger, no worrying about safety or security. It’s kind of a free-for-all, as long as you’re, well, not a dickhead.
Sure, a couple police were there, but they weren’t looking for trouble or to arrest punters, they were there to supervise. There’s an absolutely noticeable difference between those outlooks, and it made the weekend infinitely more relaxed.

I love hip hop. I really like Public Enemy. I saw them a few years ago at an RSL in Newcastle and it was amazing. But, for everything I loved about their Golden Plains set, there was something that I disliked even more.
It’s really hard to not believe the hype when that was literally 75{6dc52fbdce2f0f97cf8a089cc5e2946dca963f75b53e76b06e4c7d8acf27faad} of their set. “GP! GP! WE’RE PUBLIC ENEMY! YEAH GP! FLAVA FLAAAV! GP!” There was more hyping than music, more talking at us than rapping.
I don’t know why, but the audience were quite forcibly instructed to tweet, like, Instagram etc about, and at the band. I think Flav actually spelt out his twitter handle to us (which was pretty funny because there was basically no internet reception anywhere, and it’s also the complete opposite of what many, many other musicians have been aggressively promoting – no photos, no tweets, enjoy the damn moment…)
Don’t Believe the Hype was great. I Got Game was brilliant. Watching DJ Lord scratch the HELL out of those decks literally made me stop in my tracks with my jaw dropped. But that’s about it. Flav went on and on about how he was inducted into the Rock N Roll Hall of Fame and gave them his clock, and that’s why he wasn’t wearing a clock. How important! Thanks for wasting ten minutes, Flav. And you were wearing a clock anyway. But all my grievances aside, it was a really fun set, the crowd went pretty nuts and I’m glad that it happened. 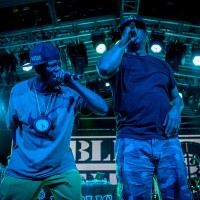 4. The Drones are the best live Australian act.

They. Fucking. Rock. The put on so much more than a gig. It’s theatrical, it’s dramatic, it’s intense. I couldn’t keep my eyes off the stage, and it was one of the few sets of the weekend that I wish had gone on for hours. It’s worth seeing them at every possible opportunity. They were my favourite act of the weekend. 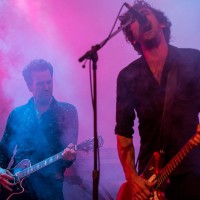 King Gizzard and the Lizard Wizard are another of my favourite Aussie bands, and they were great too, although it did feel a little washed-over. I think I prefer seeing them in small, dingy clubs. Their last EP, Float Along, Fill Your Lungs started with a 17 minute psych-jam, and while I find that incredibly cool, I just don’t know exactly how well it worked in front of a mixed audience. Other than that, It was thumping drums, raucous guitars and all the fuzzy distortion you could dream of.

While I’m on topic of my favourite acts of the festival, our brilliant Kiwi neighbours Fat Freddy’s Drop raised the roof with their bass-heavy ska-reggae. It fitted the time and the vibe perfectly and the crowd absolutely loved it.

5.  Mixing up scheduling is interesting, but doesn’t always work

Having one stage is fantastic because there aren’t clashes. It was great not having to worry about that (although honestly I think I’d prefer two stages, just to have the choice, y’know?) The epic variety of genres on show at GP was fantastic, but sometimes I’m just not sure if it worked out too well. King Gizzard playing directly after my favourite bearded soul-man Chet Faker took a moment of adjustment. And for that matter, putting Chet on at 7 pm didn’t work too well for me – but maybe that’s because I saw him at midday on New Years Day at Falls Festival Byron, and it was literally the most blissful, perfect thing ever.
Cosmic Psychos followed by Seekae? That was interesting too. (Seekae were awesome by the way, they get better every time I see them.)  You Am I came on at a perfect time though, as did Charles Bradley, another top pick from the weekend. Bradley came on right after The Drones, but it was completely fine. I can see the appeal and interest in mixing up the genres and set times, and it did work in many cases – but sometimes it just seemed a little off.

6. It’s so many festivals in one

What I love about Golden Plains is that  it caters to everybody and anybody. There were families, babies, kids, teenagers, adults, and a large older crowd. There were ravers, munters, hipster, indie kids, rockers, hipsters, hippies, hipsters and everything in between: robots, disco balls, superheroes, aliens, every imaginable kind of onesie and more. There were numerous campsites in different areas, included unofficially designated ‘loud’ or ‘quiet’ areas for families and friends of all walks of earth, and the huge variety of music gave everybody something to enjoy. It was just bloody lovely. 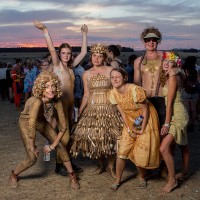 I might be particularly elated about this because I haven’t been to a BYO festival since I lived in the UK. But being able to bring your own booze was a small, but incredibly good part of Golden Plains. My last festival, Falls, had super duper strict policies. People literally lines their car doors with booze and tried to sneak it in. I saw one poor girl have about eight large bottles of Smirnoff taken off her upon entry.
It allowed us to drink – or not – whenever we liked, without having to pay a shit tonne of money or wait in a queue for an hour. We weren’t worried about having bags searched , we weren’t confined to dirty beers and dry wine. People could drink anything they liked. And it actually made it more fun to then have a break from that, and go to one of the two fantastic cocktail bars and drink an absolutely delicious Bloody Mary or two. And the espresso martinis, my god! (though at $16 a pop, I only tried one. TOTALLY worth it.)

8. Sustainability is awesome when it happens right in front of you

Golden Plains is probably the greenest festival I’ve ever been to. You usually feel a fair bit of negativity around a festival– Splendour and Falls up in Byron, Laneway in Sydney and countless other festivals have all been threatened by angry locals, but this was different. There is a lot of local support, and you could feel it.
There’s a huge locally-run food tent with delicious and super cheap sausages, coffee, sandwiches etc. There was loads of locally sourced food like Meredith goats cheese, scattered throughout all food stalls.  The compost toilets not only helped the surrounding environment, but didn’t smell or feel anywhere near as disgusting as normal festival portaloos. Every few hours, between acts was some ‘housekeeping,’ where someone got on stage and asked punters to take a few minutes to pick up any rubbish around them in the amphitheatre, and help out the volunteer cleaners. And it really worked. Meredith was good to us, and we were good to her. 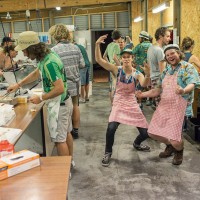