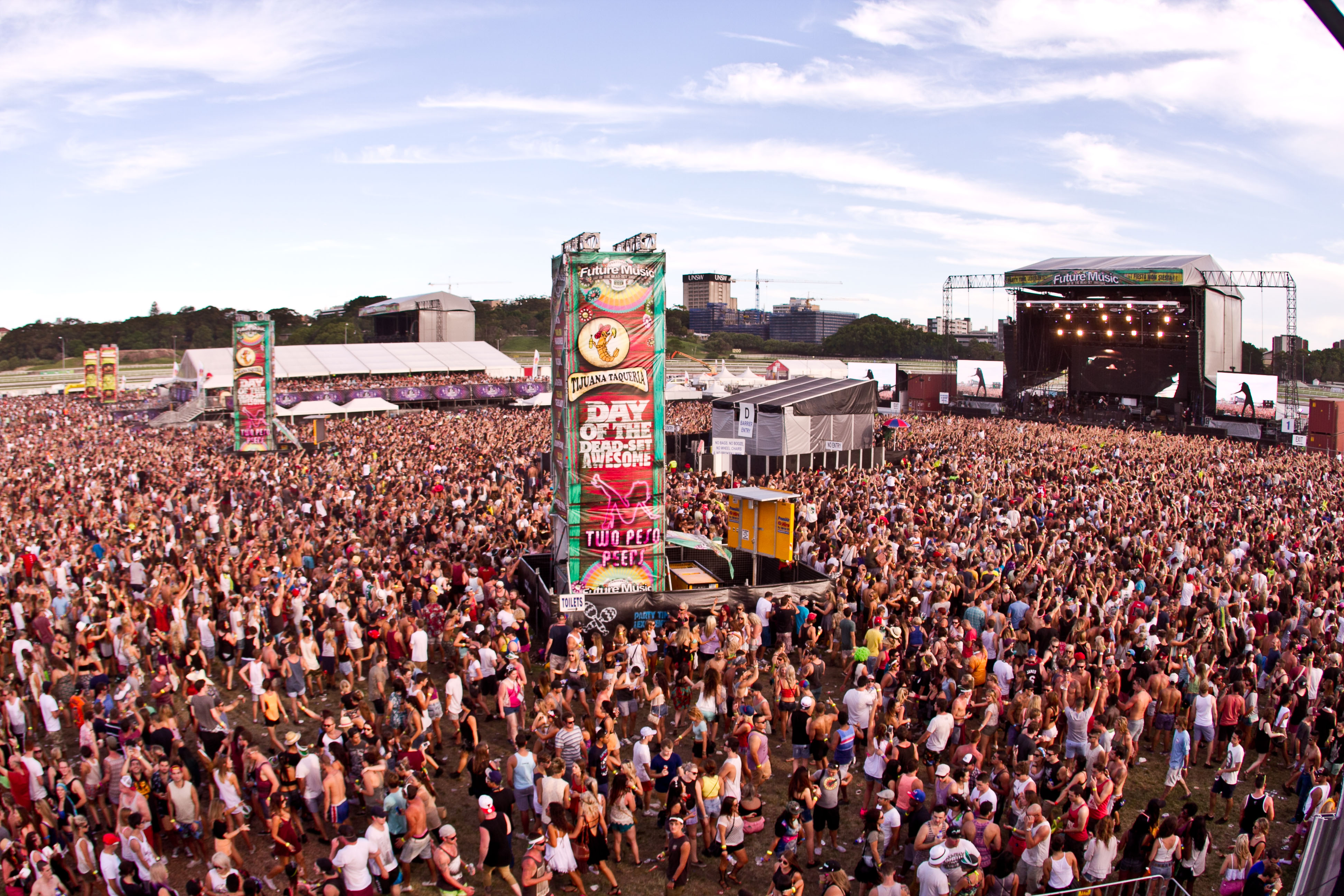 Future Music (FMF) can either be a 10 hour joyride or 10 hour nightmare. This all depends on how many drugs you take, how much booze you consume, how little clothes you wear, how many mates are with you and how much you like other people’s sweaty sweaty bodies. Unfortunately I had no drugs, no booze, a big ol’ jacket on, and was alone and friendless. Damn.

Luckily I’m not really perturbed by strange sweaty bodies next to me. So that was one plus.  As I walked through the gates into Randwick Racecourse, the bright Sydney sun brought out the glistening muscled bodies of the usual Steresonic/Future punters: the “sick lads” “bros” “shred-or-dead”, embroidered with charming angel wing, southern cross and tribal tattoos. The ladies, unable to fully go topless for fear of breast cancer (I assume), made sure that bellies, butts and boobs were all on full display. Other highlights included watching a group of 18 year olds surreptitiously sniff poppers at Eric Prydz, dancing bananamen,  and watching a girl pick up a dirty, crushed plastic Smirnoff  bottle off the ground, sniff it and offer it to her friend.

But in the end it’s all about the music.

It was an Electro dream, fit to set you dancing for the rest of the year. Bright colours, heavy bass, intense synth. Future was a playground for neon teens, with festival rides, hundreds of food stalls, and so many stages. The variety and layout was fantastic, with great performances from left right and centre.

So my main aim, apart from people watching, was to catch both Cut Copy and Phoneix. Luckily they were on one after another at the same place, Safari stage. My summary of Cut Copy’s performance would be: Tim Hooey was tripping some major balls. The guitarist/sampler for Cut Copy seemed all right at the beginning, until he stopped playing his guitar and started swinging it around his head instead. He kept going down on one knee and throwing his guitar around, in what I assume in his mind seemed like the embodiment of Slash or Hendrix, but just looked downright sloppy and messed up. He jumped up onto the speakers and started rubbing his guitar against them, until a techie came and motioned for the guitar which Hoey relented. He then grabbed a tamborine and started bashing that against everything, even jumping up onto the drums and smacking those around. He seemed bored and disorientated, wandering around stage doing whatever he could find. Who knows, maybe it was all part of the act?

The crowd wasn’t huge, wasn’t super responsive to Cut Copy, and I believe the performance was lacking. The background screen flashed “FREE YOUR MIND”, lending almost to a brainwashing kind of feeling, but lead singer Dan Whitford couldn’t seem to engage the crowd, with most people in the front bobbing politely but no moshpits or insane dance moves dominated. However for “Lights and Music” which seemed to be the crowd’s favourite, he ripped the microphone off the stand and even went down to the crowd for a bit which livened things up. It wasn’t a great performance, not bad though, and I’d expected better.

Phoneix on the other hand, were amazing. They played to the crowd, with huge roars of approval and blazed energy and excitement. Maybe the biggest contrast with Cut Copy was that Phoenix actually looked like they wanted to be there. Vocalist Thomas Mars spent plenty of time with his adoring fans, jumping on and off stage throughout the set, crowdsurfing and let everybody get their own “omg I touched the guy from Phoenix” bragging rights. The crowd was admittedly bigger, but they just performed so much better. They had great lighting, played both the newer songs from Bankrupt! and the older popular songs such as “Lisztomania”.

I really enjoyed FMF. Even though FMF convention says I should have been dinging to R3HAB, ATB or CHUCKIE with my bros instead of singing along to Phoenix sober.