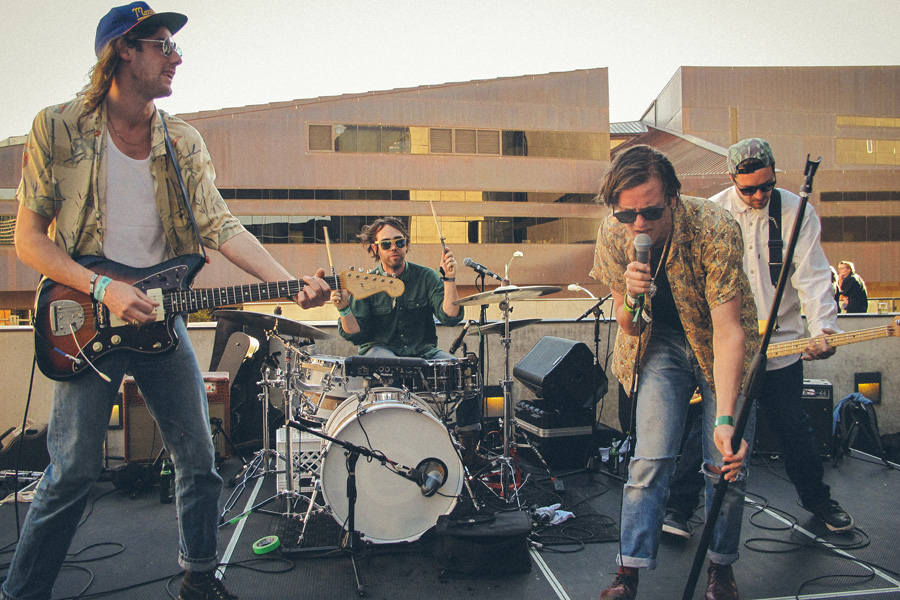 Dingwalls in Camden Lock  London was the crime scene for a night of American rock n roll early this March, and if you see either of these names on a bill near you, buy a ticket. Trust us.

Drowners opened the proceedings and easily pulled the same vibe and charisma as any headline act, reeking a stage presence on par with any of the world’s best bands.

A plethora of early teens was noticeable in the venue, but irrespective of this we pushed our way through the pre-pubescent onslaught and perched ourselves to witness a bit of Drowners. We immediately got a sense of our early Millencolin days from their set, which brought about big smiles to those who froth the Scandinavian legends.

Leading from the front in a designer leather jacket, blue steel frontman Matthew Hitt effortlessly worked his way song by song without much banter, which served its purpose for such an evening. A big element of their tunes was the lyrical mastery engrained in each song. Matthew, having studied English literature, clearly doesn’t shy from putting classy lyrics together effortlessly, which the teens obviously find arousing. Flipping their set times with SKATERS wouldn’t have been an issue as the 14+ crowd was equally as into them as the headline act. Perfect for a mid week show.

A fair bit of intrinsic pressure was put on this show from the mere fact we’d jumped the gun and named these lads as one of our bands hot to trot back at the start of 2013.

Irrespective of this, SKATERS, out of NYC, exceeded every little inch of what brought us to name such a dignitary.

Possibly the most energy we’ve witnessed from a live act over the last 12 months (besides Queens of the Stone Age at Open’er Festival) SKATERS emitted a sense of internal mateship which really reflected with their fans. Not a dull moment from the stage nor crowd, they worked their way effortlessly through their recently released album Manhattan. A few minor mixer issues lead them to improvise whilst the tech nerds fixed the problem, but this didn’t deter them.

Set highlights for us were single ‘Schemers’, hot track ‘Miss Teen Massachusetts’ and “This Much I Care”. The vibe, languid coolness and innate fusion between New York City’s sons The Strokes and England’s The Vaccines was uncanny, with lead man Michael Ian Cummings driving all passion and emotion as if he was Julian Casablancas’ double.

The lads honestly deserve and without a doubt are set for a huge 2014 of success and hopefully will meet a favourite of ours Catfish and the Bottlemen on their home soil at The Governors Music Festival.

Pushing these mega dignitaries aside we walked away from the show with a big smile on our faces hoping they’d come back to London sometime soon as we want the masses to witness this passion and energy which makes music the best thing in the world.