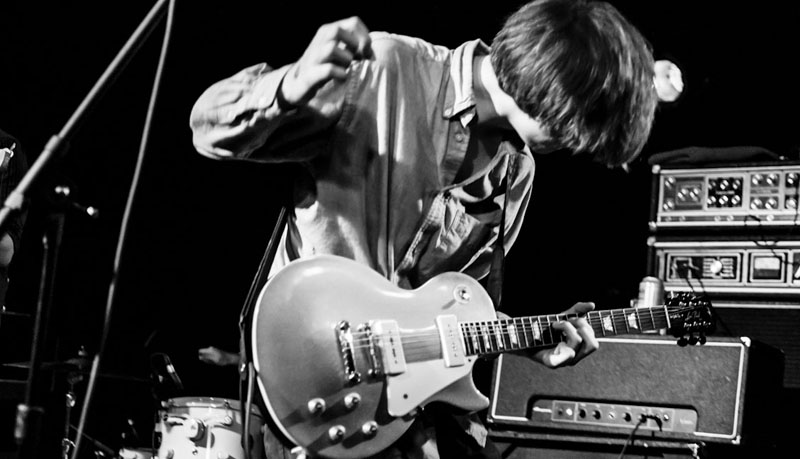 What do you look for in a New York punk rock band? A dirt-under-the-nails grit-rock aesthetic? Rambling feedback-drenched guitar odysseys that stretch well past the point of aural comfort? Whip-sharp lyrics that poke the sardonic stick at everything from success to the tanking job market, Parquet Courts have got it all in spades. They’ve picked up the squalid brand of rock’n’roll that the Velvet Underground dragged out of the gutter and that five decades of NYC bands have cultivated, and funnelled it into a sound all their own.

Their set on Sunday night kicks off with ‘She’s Rollin’, a dirty bomb of a tune that sets a noodling guitar line over a sinister bass groove whilst Andrew Savage spits exactly 15 different words into the microphone over 6 minutes. It’s an as-yet unreleased track and plenty in the audience haven’t heard it, but it leaves no doubt as to what we’re in for – no fluff, just three guitars, a drumkit, and some killer rock sensibilities. There’s plenty more unreleased material sprinkled through the set list and what we hear bodes well for the boys’ next release. Half the fun of a Parquet Courts number is unwrapping the lyrical zingers and sleight-of-hand wordplay, which is hard to do on a first listen front of stage. It’s clear though that the band is sticking to its high-energy lo-fi guns with these new tunes, they’re all tight as shit.

The band belts straight through the first four songs from last year’s Light Up Gold. It’s a pretty potent reminder that this is the most effortlessly cool band on the circuit. The ridiculous, frantic bluster of ‘Donuts Only’, the perfectly restrained exuberance of ‘Borrowed Time’, this is the real deal. Plenty of critics have gone through the roll call of Parquet Courts’ obvious influences, but there’s nothing derivative about these bangers. As bassist Sean put it in an interview with yours truly last year – “At the end of the day though [Parquet Courts is] just story-telling punk rock music, and a lot of the bands that people compare us to are the same, just stories put to music.”

‘Stoned and Starving’ is the centrepiece of the set – a rambling 10 minute epic of wandering through New York “debating Swedish Fish/ Roasted peanuts or licorice.” A simple 2 chord drone and lyrics delivered with a deadpan snarl (I was holding some wadded bills/ I was reading that smoking kills) turn what could have been a stoner-rock goof off into a monster track you can’t help but take seriously. Played live, it’s phenomenal. That relentless guitar riff and a murderously tight rhythm section keeps the song moving along with the momentum of a freight train, and every off-kilter solo is captivating. It’s the sort of performance you want to record and play to your kids, just to show that your generation ‘got it’.

When the set rounds out with another new one, ‘Sunbathing Animal’, and the lights come on, the crowd begs for more. But Parquet Courts don’t do encores. As one punter remarks: “There are plenty of people who pretend they don’t give a fuck, but these dudes really do not give a fuck.” Word.