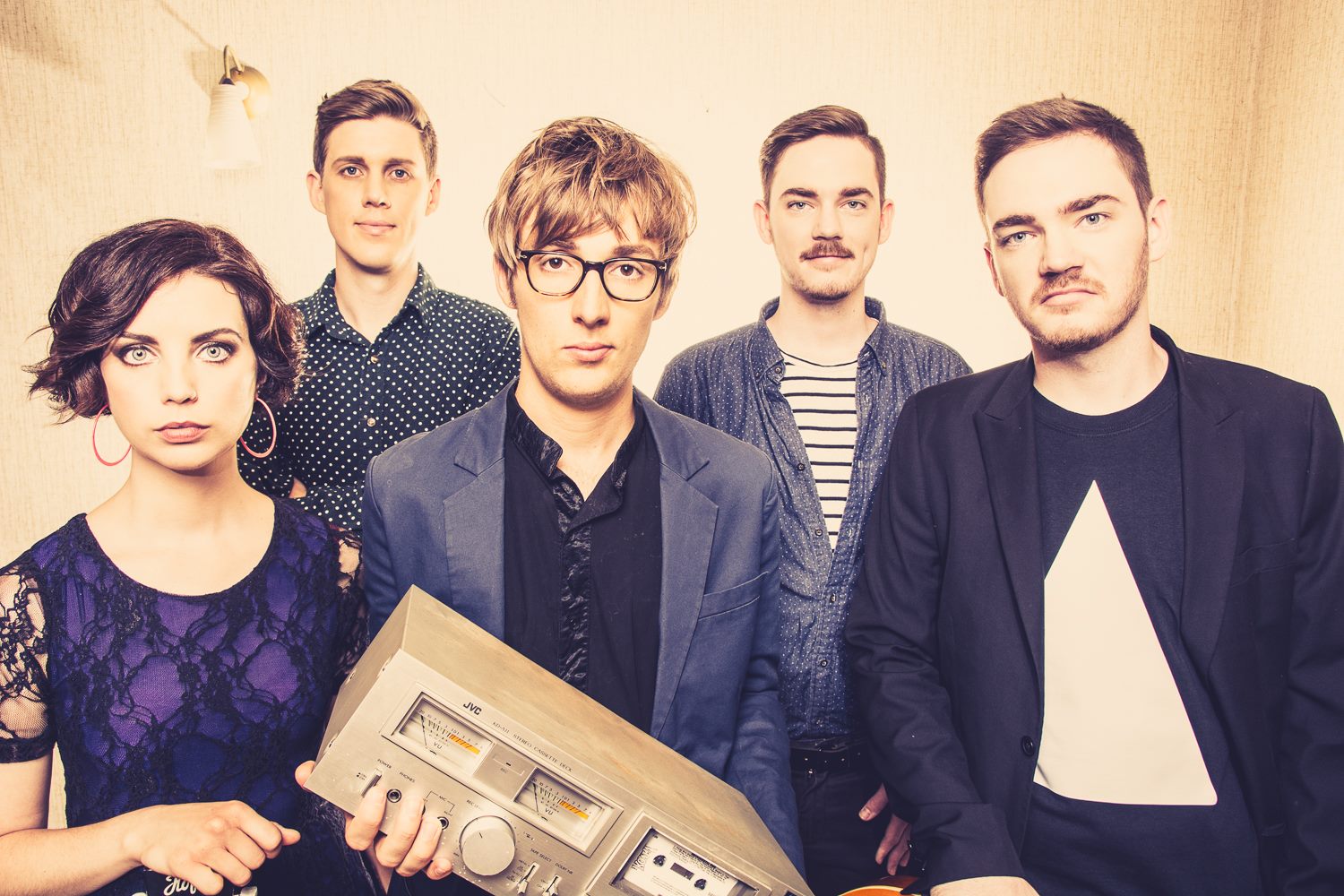 Ball Park Music, the dudes and gal responsible for Happiness and Surrounding Suburbs and Museum, are on the verge of dropping a third studio album in exactly a month (wow that’s close) and are set to commence their biggest Aussie tour yet. With all this going on, we thought it a primo time to catch up with the band. We spoke with front man Sam Cromack about all things Ball Park and all things Music.

Unfortunately, there’s still no word on whether or not the lyrics to “Sad Rude Future Dude” are actually based on my life, or if that’s just a coincidence.

And I heard somewhere puddinghead is like a Shakespearian insult or something?

Yeah, I discovered the word when I was at high school.

You a bit of a thespian, Sam?

Haha, no, no, I’m definitely not a Shakespeare buff, but I think every Australian high school English student has studied Shakespeare at some point.

We had a song called “Puddinghead” but it didn’t make the album. Daniel looked it up on Urban Dictionary and it means “someone who manages to fuck up even the most basic of tasks”.

Can you tell us about the recording process for this one?

Yeah, it was good, we produced this one ourselves, found a space and brought in a bunch of gear. So it was an all new experience for us. I had done a few home records, but never really produced in a professional capacity like that before. We loved it. Doing it ourselves gave us more flexibility and freedom, and we could come and go as we please over a period of about nine months. We’ll definitely produce for ourselves next time.

You also worked with Tony Hoffer, who has produced stuff with Phoenix, M83, The Kooks and others. What sort capacity was that in?

After we recorded it all ourselves and put it together, we sent it to him in LA. He sort of looked at what I did and cleaned it up and checked everything I had done. Made sure it sounded nice. He did a really good job.

I remember when Museum dropped, you said you had set a goal for the band to release an album every twelve months. This one’s taken a bit longer, did you feel like you needed a bit more time with it?

Yeah, kind of. We signed with new management at the start of last year, and they implored us to take a bit of a breather. We had been touring relentlessly and making records for the last two or three years, so it was good to retreat from the spotlight a little bit and take some time off to make the record. I think that was really beneficial. Even still, if you ignore the calendar years, it’s our third record in less than a three year period.

Happiness and Surrounding Suburbs was a brilliant debut album, and Museum obviously built upon that. With two great albums already released, did you feel pressured to do even bigger and better things?

Yeah, absolutely, but I think that’s healthy. I’d feel flat if that’s what we weren’t aiming for. As artists, the most exciting prospect of going into a new record is expanding on what you’ve done and meeting those expectations. Just trying to give your fans something that is familiar on one hand, but also something that is brand new, so that they’re growing with you as an artist. I feel like we did that on this one.

We sat down and figured out what worked with the first two and used that to influence where we went. And then we also did some new stuff with recording and technology and that influenced everything as well.

You’re touring the album when it drops; is this your biggest Australian tour yet?

Yeah, technically it is our biggest. It’s twenty dates, but if we double up on some shows, then it will get even bigger.

Papa VS Pretty are touring with you as a support act; have you worked with those guys before?

I’ve played a couple shows with them before. They’re lovely dudes, really talented. I listened to their new record on the weekend and it’s great. Super pumped to go on tour with them. I also know the guys from Holy Holy, and sat in on a few of their recording sessions. Just super pumped with all the bands we’ve got coming on the road with us. All lovely people and really good musicians. It’s gonna be awesome.

Do you prefer playing your own tours, or festivals such as Groovin the Moo and Splendour, which you’ve done in the past?

Doing our own shows is quite fun. It’s kind of an indulgent experience. You get the venue to yourself, so you get there early to prepare everything just the way you like it. You can be a real perfectionist at your own show. And then obviously all the fans that come are fans of your band primarily, so you always get a really good response.

I think festivals offer something exciting too, because there’s more people and then also more bands. It’s a real sense of community, and I think bands are naturally competitive. Like, it’s fun playing on a stage that you have to share with everyone and that really pushes everyone to impress the audience. Festivals that are open air have such a big atmosphere, there’s a rush of nature and music.

Your first ever tour was with Hungry Kids of Hungary, and you obviously know them quite well. Knowing they played a part in Ball Park’s early career, what were your thoughts on the band’s departure from making music late last year?

Yeah, it sort of came as a little bit of a surprise. They had been reasonably quiet for a bit and we did know them quite well, so I kinda knew there was a litte bit of, sort of, trouble, I guess. But I never thought it would result in the band fully calling it a day. So that was sad. For us, it definitely felt like the end of an era.

You know, you’re right, I can still remember going on that first tour. They really helped us get a foot in the door. For it to be over completely for them was really like, “Wow, I can’t believe they’re gone, and we’re still kicking around.” It’s a really weird experience. But they’re all going on to make more music. Their drummer, Ryan, plays in Holy Holy and he’ll be on tour for us. It’ll be really good to see and hang out with him. He’s a lovely dude and a great player.

You said you were listening to Papa VS Pretty’s new album – White Deer Park, I think it’s called; have you been listening to any other new music?

I’ve been listening to the new Beck album a lot. I got an advanced copy from a guy I know at EMI, so I feel pretty special driving around listening to that one before everyone else. It’s good driving music. It sounds a lot like Sea Change, his earlier album from 2002. Sort of an Americana vibe. Pretty and kinda sad.

What would your favourite song of 2014 be thus far?

What’s it like playing with two twins in a band? Is there a bit of sibling rivalry between Dean and Dan?

One’s on guitar and one’s on drums, so thankfully they don’t have to compete too much. If anything they stand together all the time. They’ll come to us other three as one united front with an idea or whatever they’re thinking, which is funny. Sometimes they have little spats when we go on tour; they like to stir each other up, which is kind of funny for us.

It’s different with siblings. If you see two friends arguing and it’s getting a bit tense, you might be inclined to split it up. But when the twins fight, we just sit back, relax, and watch it. They always sort it out.

Do you ever get the two of them mixed up?

When we first met I did. The funniest is when we go on tour and all the other bands can’t tell them apart. Even Triple J, who have seen us a bunch of times, get them mixed up which is always amusing.

Triple J has really championed you. You won Unearthed, and Richard Kingsmill is a big fan of yours. What’s your thoughts on Triple J’s influence on artists’ success?

Well obviously that’s been big in the media recently, but, to be honest, I think it’s a load of shit. They have championed our band, as you said, and I’m extremely grateful for that. But it wasn’t always the case. Prior to being played on Triple J, we would send them singles, and this was well before we had any artist representation, and they would politely say “this isn’t right for us” or “we don’t dig it” or whatever. So we just kept coming back, kept trying. You have plenty of setbacks before recording a truly great song.

We had Richard Kingsmill come to one of our shows at BIG SOUND years ago and I think it wasn’t until after he saw us play live that he was able to change his opinion of our band. I guess he saw something in us and I remember after that, he did start championing us a bit, which we’re extremely grateful for.

But people whinging about Triple J and saying that it’s not good enough, or it’s not fair, or whatever, I don’t buy into it at all. I really think that if you’re passionate, and you stick at it, you’ll find a way. People also forget that so many other countries don’t have anything like Triple J. There’s nations where rock and roll is popular, for example, but they don’t have any radio stations representing what they do at all. Or it’s all too segregated. Triple J is a national broadcaster and that allows bands to tour from New South Wales to Western Australia and still pull a crowd. I think we’re pretty lucky in that regard.

I believe that if you’ve got something to say and you’re a true artist you’ll find a way. But it’s not by whinging about a radio station and saying everything’s their fault.

I definitely agree. And I think you guys have been more than deserving of the success you’ve had. Is there anything set in stone for Ball Park after the album and after the tour?

I think we’ll gauge how well the album does and decide what to do from there. It’s definitely on our agenda to play as many shows as possible this year. We’ve got our eyes on overseas as well, so we’ll see what evolves there. I’m really excited for the album to drop and what kind of opportunities present themselves afterwards. 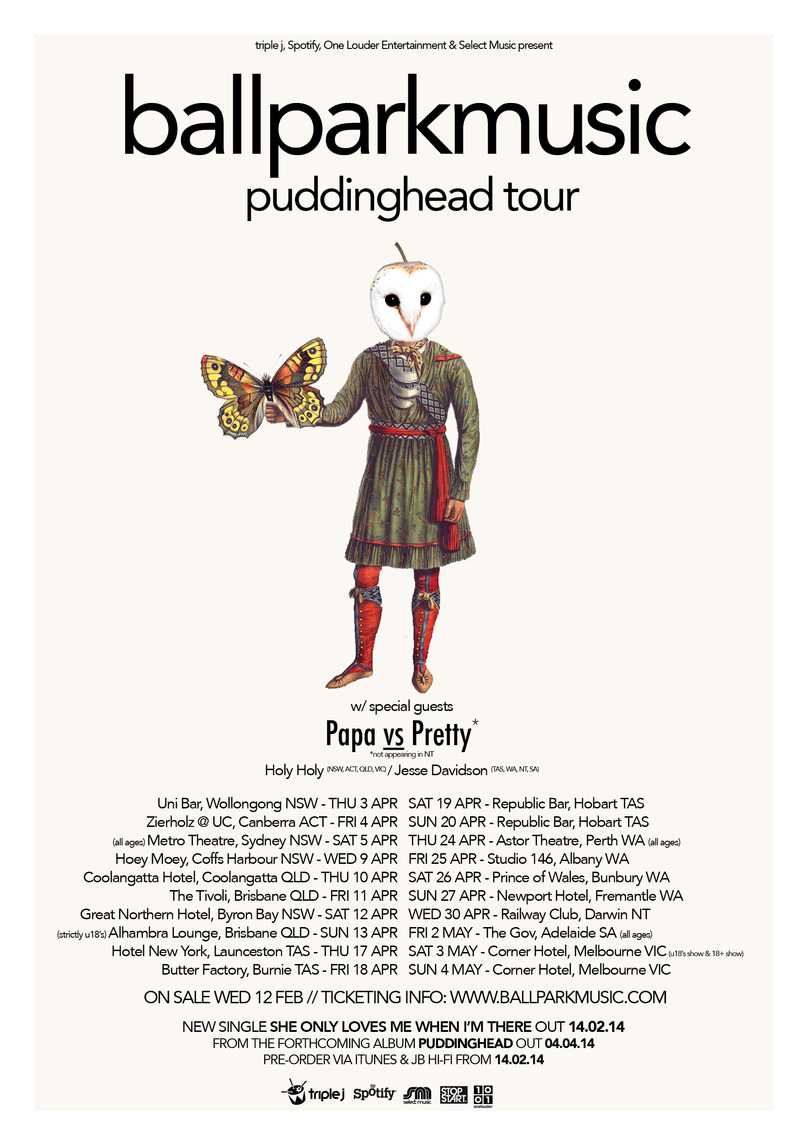