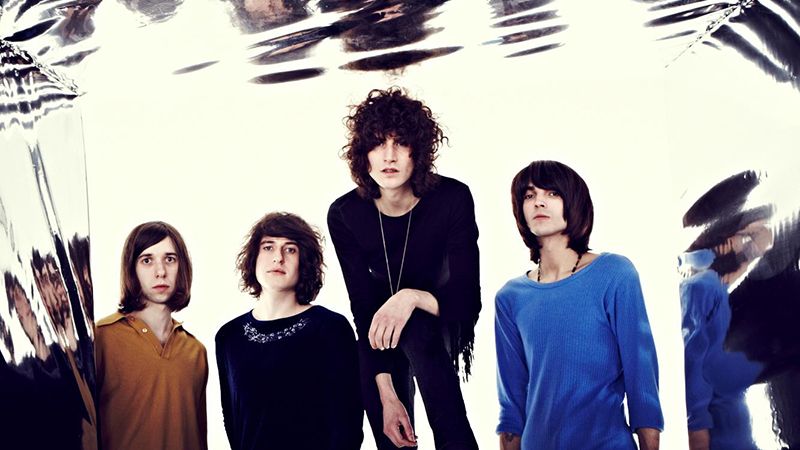 UK psych-rock outfit Temples are set to take on the world. Their album Sun Structures came out in early February to rave reviews (including being chosen for a triple j album of the week, and garnering the attention of big name musicians like Noel Gallagher and Johnny Marr).

They’ve just returned to the UK after SXSW and will be touring non-stop for the next few months, including an appearance at Coachella, before heading down under for their first ever Australian tour in May. We spoke to bassist Tom about creating their own sound, producing an album on your own and the coincidental of how Temples came to be.

Hey Tom, how it going?

Yeah very good thanks, we’re in Leeds at the moment, just finished a show on the NME tour. It went really well, it’s only the second show of the tour.

How’s your year been so far?

It’s been a busy start to the year and it’s been even crazier since the album came out. Basically since then we’ve been on tour constantly, so it’s kind of detached us from the experience of having an album out, but it’s great.

I really love the album, what I really like is that you’ve created this original, self-contained soundscape, but there’s also  a retrospective aspect without trying to be a straight up copy of the past. It obviously reflects music of the ‘60s ’70, but so many bands that do it today just sound like they’re a cover band.

Thank you. I guess it was the precedent for the band really, especially with the album, to create a sound for the whole record and something that’s completely unique onto itself and something that whoever is listening to it can completely immerse themselves in. So many of our favourite records involve the music, lyrics, even the album cover, the three of those work together to create this greater experience and I guess I feel like that’s possibly been lost in recent years of music – that mystery, and just something left unanswered for the listener to kind of discover themselves and make their own perception of the music.
But that’s very kind of you if you feel it’s achieved that, we wanted to create this world around our songs and for it not to be derivative to any particular decade, but to have a timeless aspect to our songs.

Like you said, a lot of music these days is so separated. People hear one single, and the topic of album covers is particularly interesting as people are buying more and more music on the internet and not looking at that artwork, but it really adds to it.

It’s what inspired us to begin with, those early ‘70s rock records with fantastic covers and really mythical lyrics, and just the two of those working with the music create something quite odd, that you’re just completely transfixed by, and I guess w wanted to copy that. Bands like King Crimson, Yes, early Pink Floyd… a lot of those records. It’s really inspiring, how right they got it.

Yeah, it’s amazing when you hear people who have been influenced by that, to create their own music.

I guess people who have been influenced by it in recent years as kind of like a revivalist thing and they don’t really look any further past being quite pure, or a purist toward those influences. For us, I think it was more the effect that those records had, the British sensibility of song-writing that they have, taking it and bringing it to now, and trying to do something different but always focused on that idea of being pop conscious in our song writing.

So you produced Sun Structures by yourself, how was that process?

I guess the more we went on, we realised how much a great prospect it was. It was challenging at times, and at other times it was really liberating – the most enjoyable and free-flying experience ever, and being in charge of yourself is something that very few musicians get to do these days, especially in a recording studio when you’re against the clock, and there’s money involved. It kind of restricts your process and is very regimented but for us, being able to record whenever and write whenever and work at our own pace and often record as we wrote. So any idea we had, we’d go and record it straight away, and very quickly you build a picture of what a song would become.
It eradicates the idea of a demo I guess, you work and work on a song until it’s finished, we don’t cut and print, and then start again, that very initial idea it’s all there, I guess it’s on the canvas until it’s finished. We keep working on it. I don’t think the album could’ve been done any other way either. It allowed us to grow and develop as a band, and facilitated everything. It’s where Temples were born, in the studio, it’s completely instrumental in how we exist now. It means an awful lot to us.

Do you think you’ll continue to produce your own?

I think that because we write so much with sounds as well as musical ideas, and moods, we’ll always have a hand in that side of things. But whatever we do next, we’re certainly open to working with other people. I think that throwing yourself into different situations is always a good thing, but because it’s a part of how we write. I think we’ll always have a strong idea there rather than giving it to someone else.

Have you always played music?

Since I was very young yeah, we all have, and where we’re from in Kettering is a very small town and you become quite familiar with other musicians, you kind of gravitate towards each other. I guess it was quite an organic and coincidental process that we all ended up being in Temples. We’d all gone off and done our other things, moved to different places, studied different subjects and it just so happened that we were all back in our home town at the same time.

If you could play anywhere in the world, where would you play?

Um, I don’t know. A desert would be great, at night, maybe in Egypt. It might be a little clichéd but yeah I think that would be quite alien especially to where we’re from, a massive land which is formed unto itself. Or maybe at sea. On a cruise ship.

Is there anywhere coming up you’re looking forward to that you are playing? You’ve got Coachella, you’re coming here…

We’re really looking forward to Australia, yeah. I don’t think any of us have been there before. We’re looking forward to seeing what it’s all about, we’ve heard so many good things, there’s such dedicated music scenes in places like Perth and Melbourne. It’ll be such a contrast I guess, to anything else.